In a curious case of interstellar immigration, astronomers have found an asteroid that came from outside our galaxy hurtling around Jupiter. Now, there are millions of asteroids that circle Jupiter and most of them are in two huge clusters. But this asteroid — named 2015 BZ509 or ‘BZ’ for short — is going the wrong way.

Best part? It’s been doing that for about 4.5 billion years. It was attracted here initially by the sun’s gravitational pull (who wouldn’t be?) and decided to stick around, but wanted to do so in its own way. Via the NYT, take a look at the orbit here: 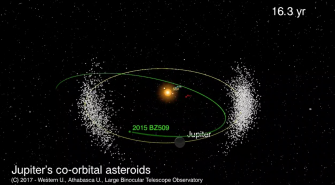 Pretty neat! Each rotation around the sun takes about 11.6 years, and due to Jupiter’s own immense gravitational pull, the orbit is stable. It narrowly avoids a collision with its gravity host by moving in an oval-shaped orbit in the wrong direction around the sun, and therefore barely missing the two clusters of asteroids that already follow Jupiter.

BZ is about 3km, or just under 2 miles long, roughly the size of New York’s Central Park. Given that the one that killed the dinosaurs was 9 miles long (and just so happened to hit the part of the Earth that could create such damage, the 13% or so of the crust that could create that much soot to cover the atmosphere and create an ice age), we shouldn’t have too much to worry about.

All roads may not lead to Rome, but many of them lead to wealth and prosperity — even 1,500 years after the fall of the Roman Empire.
Up Next
Mind & Brain

Could brain stimulation be the answer to ending drug addiction?

TMS might also help those with anxiety, PTSD, and traumatic brain injury.