Contemporary locals call her “Xach’itee’aanenh T’eede Gaay” in Middle Tanana, or “Sunrise Girl-Child” in English, though there’s no way to know what her name was when she was alive. That was 11,500 years ago. The six-week-old’s remains, found on a bed of antler points and red ocher, were discovered in an ancient Alaskan burial pit in 2010, and hers is the second-oldest genome found in North America. “There has never been any ancient Native American DNA like it before,” says Harvard’s David Reich, speaking to New York Times. An analysis of her genome has just been published in Nature and it changes what we thought we knew about the arrival of humans in North America. While it’s been long understood that they walked here through Beringia, a now-submerged swath of land connecting northeast Asia and northwestern North America during the Pleistocene, the research re-writes the story in a few ways. 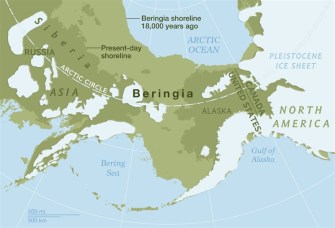 To begin with, Xach’itee’aanenh T’eede Gaay belonged to a distinct and previously unknown population the study refers to as “Ancient Beringians.” The study infers that they pre-date northern Native Americans — including the Canadian Athabascans, as well as the Navajos and Apaches — and southern Native Americans. Tracing the the child’s genome back, it now appears that all of these people originally emerged from a single population that first became genetically distinct from other East Asians around 36,000 years ago. Co-author Eske Willerslev tells the Times, “[East Asia] wasn’t such a bad place as we kind of imagine it or as we see it today,” with evidence suggesting people there lived on grasslands where they hunted wooly rhinos and other large animals.

Exactly when this founding group’s descendants migrated from Asia, though, is less clear. It seems the Ancient Beringians settled in Beringia, consistent with what’s called the “Beringian standstill model,” while Native Americans spread across the North American continent between 22,000 and 14,600 years ago. What’s not known is whether they traveled from Asia together, or whether this split occurred before migration. The study also finds that Northern and southern Native American populations likely separated somewhere between 17,000 and 14,600 years ago south of the still-present ice sheets. 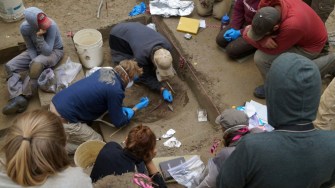 The recently published analysis is the result of genetic detective work begun in that central Alaskan burial pit. The Upward Sun River site had been discovered in the Tanana River Valley in central Alaska by study co-author, archaeologist Ben A. Potter in 2006, who actually discovered the remains of two infants in 2010. The other was named “Yełkaanenh T’eede Gaay”, or “Dawn Twilight Girl-Child.” (Cremated bones of a three-year-old were also found, though no useful DNA could be pulled from them.) 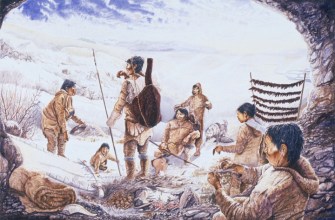 Mitochondrial DNA revealed the two infants had different mothers, and also that it was the same DNA found in contemporary Native Americans. Intrigued, Potter teamed up with Willerslev, who had in his possession the bones of North America’s oldest genome, the 12,700-year-old Anzick Child, as well as those of the 8,500 year old Kennewick Man found in Washington State. Only the genetic material from Xach’itee’aanenh T’eede Gaay proved complete enough and robust enough to allow the researchers to trace back her lineage. 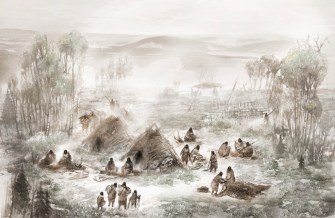 As for the Ancient Beringians, no one yet knows what happened to them. It seems from archeological clues found at the Upward Sun River site that they survived as a distinct culture for at least 13,000 years. People living nearby are genetically Northern Native Americans, but did they supplant the Ancient Beringians, interbreed with them, or did something else altogether happen? That’s a whole other mystery.

Related
Sponsored
Want to boost your happiness? Buy experiences, not material possessions
Some experiences even continue to pay dividends time and time again.
High Culture
Did Paul Cézanne hide an early self-portrait underneath a 160-year-old still life?
To answer that question, we may have to figure out when the famed painter started to go bald.
Strange Maps
Dutch government releases a genuine treasure map from WWII, sparking a hunt for the loot
X marks the spot. The Dutch town of Ommeren has been swamped by detectorists armed with shovels looking for $20-million treasure.
Thinking
Creative wisdom from Rick Rubin: embrace your inner gatekeeper
Unlock the full potential of your creativity with holistic detachment. This is the way of the editor.
If money doesn’t buy happiness, you’re spending it wrong
These money experts say you can buy happiness. There are some red flags to look out for, though.
▸
7 min
—
with
Lindsay Bryan-Podvin
Up Next
Surprising Science
Imagine All the Trees Are Gone — Maybe You Don’t Want To.
Our survival is rooted in theirs.