That may be changing, according to the latest research by Project: Time Off. Their annual survey, conducted by market research firm GfK, found that the average American worker took 16.8 paid days off in 2016–nearly .5 days greater than the year before. The findings came from an online survey of 7,331 American workers who work full-time and are eligible for paid time off.

The trendlines since 2000 have shown Americans taking fewer vacation days each year, so the significant recent uptick serves as a potential indication of a paradigm shift towards a better work-life balance. There may be some catching up to do; the average amount of paid vacation days used by American workers between 1976 and 2000 was 20.3 days per year. 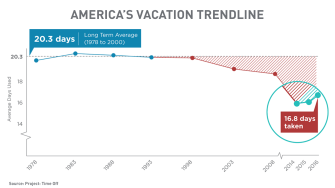 Americans Are Taking More Vacation. But is it Enough?

The United States stands out as the only industrialized country not to have mandated paid vacation for full-time employees. 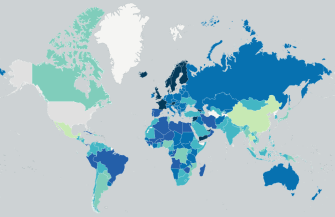 The vacation policies vary dramatically through the American workplace, along with the work-life balance focus (or lack thereof) within each company. A major distinction that we often overlook is that having paid vacation time is not the same as taking paid vacation. The research by Project: Time Off found that the average American worker left over five days of unused paid time off last year. 25% of the workers surveyed have a “use it or lose it” policy with paid time off (PTO).

Why Would Workers Not Use Vacation Days?

Even though 96% of the Americans surveyed said that using their PTO was important to them, a significant portion do not follow through on that desire. 39% of the workers surveyed said they wanted their boss to view them as a “work martyr.” However, this type of sacrifice may not pay off career-wise. According to study, those that forfeited their PTO were less likely to get promoted at work than those that used their PTO. 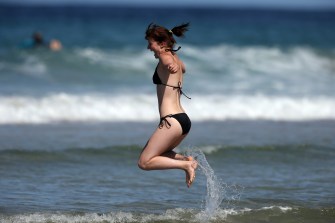 While many commentators have speculated about America’s puritanical roots attaching guilt to leisure, it is interesting to note that PTO is not taking evenly by men and women. It is particularly striking to see the differences between Millennial men and women–a generation portrayed in media as valuing experiences through vacation, along with an egalitarian outlook regarding gender roles.

Millennials were more likely than Gen Xers and Baby Boomers to want their boss to view them as a “work martyr.” And while 51% of Millennial men used all of their paid vacation days in 2016, only 44% of Millennial women did. 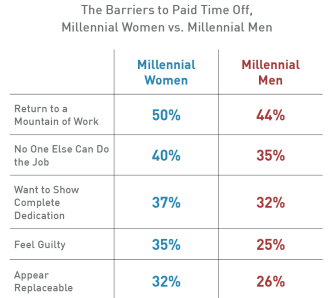 Unlimited Vacation Policies to the Rescue?

Don’t count on it.

Speaking to workplace strategist Erica Keswin, she emphasized that we shouldn’t let unlimited vacation day policies fool us–it is all about the workplace environment. Keswin is the founder of the Spaghetti Project and author of the upcoming book, Bring Your Human to Work. In addition, Keswin researches various workplace vacation policies and whether they are being modeled by management. She pointed out that oftentimes employees at companies with unlimited vacation policies take off less time.

“Regardless of the policy,” says Keswin, “senior executives need to walk the walk when it comes to taking vacation. If they don’t take – nobody else will.”

“I can feel the difference in myself when I take adequate time to sleep, to rest, to actually take a vacation every now and then versus when it’s just to go, go, go…I think we’re moving away from the workplace where people have to be butts in the seats from 9:00 to 5:00 and if they need to leave for a doctors appointment or because their kid is sick or maybe they’re just having a really challenging day and it would be better for them to leave and finish up that work later, I think that it’s really important to support your employees in being whole humans and do your best to let them do that.”–Kathryn Minshew, CEO and Co-Founder of The Muse.

Taking adequate vacation time is essential for workers to feel renewed, recharged, and respected. What American workers may need more anything is a feeling that vacation is not merely allowed, but encouraged.

“Salvator Mundi” sold for a record-breaking $450 million in 2017, but is it really as valuable as people were led to believe?

The U.S. military once used Google’s tech without their employees knowing. Anna Butrico explains the complicated history behind “Project Maven.”
▸
with
Anna Butrico
Starts With A Bang

In the 20th century, many options abounded as to our cosmic origins. Today, only the Big Bang survives, thanks to this critical evidence.
Up Next
Hard Science

Scientists are going into old science books to see if there’s anything they’ve overlooked or can improve upon.