There is a new radio telescope up and running based in Karoo, South Africa. The MeerKAT (Karoo Array Telescope), as it’s named, operated by the South African Radio Astronomy Observatory, is already producing brilliant images of the super massive black hole that is at our galaxy’s center, 25,000 light years away.

That center is obscured from view when using traditional methods of observation; it’s behind the constellation Sagittarius, where clouds of gas and dust hide it from view. However, MeerKAT’s radio wavelengths penetrate the obscuring dust and open a window into this distinctive region and its black hole. 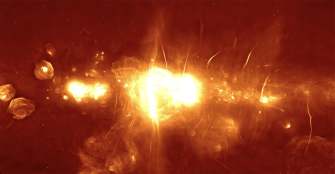 Taken by MeerKAT, this shot shows a 1,000 x 500 light-year area of the center of the Milky Way. The brighter the spot, the more intense the radio signal. Image by Square Kilometer Array, South Africa.

The “filaments” that you see in the image above are not yet fully understood, after being first discovered in the 1980s, but they only exist near that central black hole. The other objects are remnants of supernovae and star-forming regions, near dead center of the Milky Way.

“We wanted to show the science capabilities of this new instrument,” said Fernando Camilo, chief scientist of the South African Radio Astronomy Observatory (SARAO), which built and operates MeerKAT. “The center of the galaxy was an obvious target: unique, visually striking and full of unexplained phenomena—but also notoriously hard to image using radio telescopes.”

“Although it’s early days with MeerKAT, and a lot remains to be optimized, we decided to go for it—and were stunned by the results,” Camilo continued. 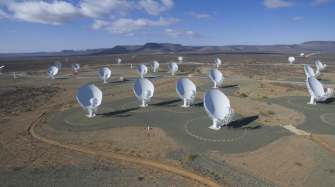 All 64 dishes of the MeerKAT radio telescope array, up and running in South Africa. Astronomers “celebrated” completion by taking a snapshot of the center of the Milky Way. Image by Square Kilometer Array Africa.

This is not the first image by MeerKAT; it captured an image two years ago of an area that scientists previously thought only held about 70 galaxies; MeerKAT captured over 1,300. 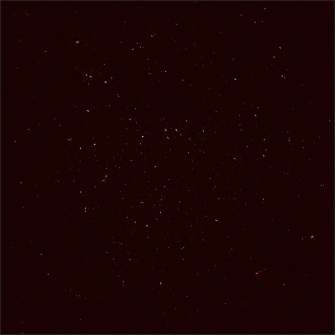 Bears, chimps, or humans? A track of five poorly preserved footsteps at Laetoli has puzzled paleontologists for decades. Now, a research paper from Nature claims to have solved the mystery.
Up Next
Culture & Religion

How one fence ruined an eco-system