Maybe it’s their facial expressions—or frequent lack thereof—that make us wonder. Or the  bursts of energy: I had a cat who would be sitting across the room, explode, and suddenly reappear behind me with my leg inexplicably bleeding. Cat owners and normal people find these characters fascinating. (If you haven’t caught the Simon’s Cat series yet, it’s highly recommended.)

Do you know about the slow blink? If you want to make a non-aggression pact with a cat, look right into his or her eyes and slowly blink. The cat will respond in kind. I believe it means, “Hey, I trust you enough to close my eyes in front of you, and you can trust me, too.”

But at least that makes sense. Then again, maybe the rest of their loopy behavior does, too, if, as Tony Buffington says, a lot of it comes from instincts developed during a long schizoid history of being both predator and prey. He lays it all out in a great TED-Ed video.

If you have a loft, for example, your cat’s probably likely to prefer its skinny, precarious bannister to the wide upper floor because in the wild, having a clear view from up high is the way to keep predators from sneaking up on you. (The top of a bookcase will also do.)

If that fails, hiding’s useful, too, and so your cat sneaks on occasion into your sweater drawer. The universal feline love affair with boxes may also be a safety thing. And, of course, a cat would never hide in a grocery bag. 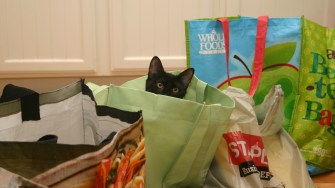 As far as predator instincts go, your cat winding up its butt before leaping at a toy, or a bird outside a closed window—doh—is merely the the launch of kitty’s natural stalk-pounce-kill-eat routine.

Instinct is also why cats like to reach under pillows and squeeze into small places since they’re the kind of hidey holes that often contained yummy prey in the wild. Nor does your tabby hate your couch, curtain, or rug—it just needs to shred these things now and then to keep its main offensive and defensive weapon, its claws, ready for action.

A lot of this instinctive behavior, obviously, isn’t necessary in our homes, but a cat has little reason to fight nature—we do keep feeding them, after all.

It turns out it’s hard to make work at an Amazon warehouse fun.
Up Next
Health

One Minute of Exercise Per Day Is All You Need, Say Researchers

Brief bursts of intense exercise give the same health benefits as a long moderate workout.