According to Donald Trump, “When (the USA) is losing many billions of dollars on trade with virtually every country it does business with, trade wars are good, and easy to win”.

Few economists agree with the second part of that statement, and this map indicates that there may be something wrong with the first part that presidential tweet as well. Yes, China is by far the biggest exporting nation in the world. But the U.S. is still a solid second. Which makes the trade wars unleashed by @POTUS potentially a lot worse than Trump thinks, and a lot easier to lose.

Based on WTO data for 2017, this world map shows the value of goods exported by countries across the world. It’s worth noting, too, that the map focuses on tangible exports, excluding services, which are immaterial. The countries are placed about where they would be on a regular map, but their size is skewed: the map doesn’t reflect their actual physical size, but the value of their exports.

On a normal world map, Russia, Canada and China would be the first to third-biggest countries, here it’s China, the U.S. and Germany (in that order). 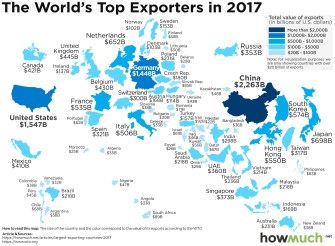 Their color further indicates the total value of the goods exported: 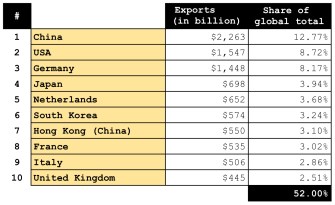 The map excludes countries with exports of goods less than $200 billion, hence the absence of the Caribbean, Central America and most of Africa.

According to the WTO, the total value of all exports in 2017 (including by those countries exporting less than $200 million) amounted to just under $17,730 billion (or, in a slightly more compact notation: $17.73 trillion).

China exports half more than the second-biggest exporter, but that’s not all: the figure for Hong Kong, counted separately but part of China, should be added to the figure, which then amounts to $2.81 billion (or almost 16% of the global total). 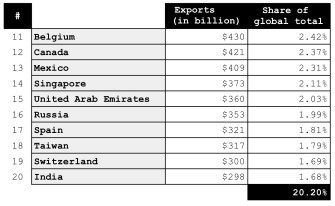 That’s almost double America’s exports. Still, only Germany is in the same league as the U.S.  which also means that both countries together represent the same export power as China plus Hong Kong. The seven other countries in the Top 10 each export less than half of the figure for the U.S. (or Germany). Together, they export almost $1.3 trillion less than the Top 3 added up.

Still, the entire Top 10 combined represents more than half of the world’s exports. The next ten barely manages 20%.

Surprisingly (or perhaps not), geographic nor population size correlate with export prowess. The Dutch, at #5 the highest-ranked ‘small’ nation, out-export both the British and the French. The Belgians export more than either the Canadians or the Mexicans. Singapore bests Russia. Tiny Taiwan outperforms enormous India. 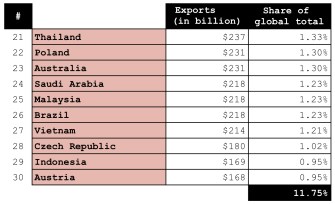 The atmosphere’s habitable zone is so small, several mountain ranges extend beyond it.
Up Next
Politics & Current Affairs

China has allegedly developed a 'laser gun' that can burn you to death. It probably doesn't exist.