Since last Wednesday, Venezuela has two presidents. The world map above shows which countries (in red) support Nicolas Maduro, whose re-election last May many observers say was rigged; and which ones (in dark blue) support Juan Guaidó, the opposition leader who declared himself ‘interim president’ last week.

There’s something more going on with that map, however – something ominous about the two camps that have coalesced on it. These are not just two random groups of countries. These are two camps, with plenty of grievance and enmity between them. Some of the borders between both blocs are even active frontlines. Could this be the outline of a new Cold War, or if cooler heads don’t prevail, a hot one perhaps? 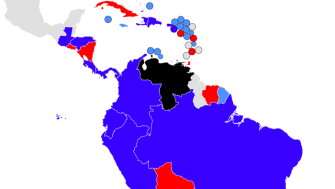 Most of Venezuela’s neighbors have recognized the presidency of Guaidó, but Maduro can count on the continued support of Cuba, Nicaragua and Bolivia, and a few others.

All that for Venezuela’s sake? If that sounds ludicrous, think back to 1914. Few people back then could find Serbia on a world map, let alone understand what its beef with Austria-Hungary was about. How quickly that escalated into the First World War.

Although the cause might have been obscure, the war itself was not a surprise. Decades-old rivalry between the great powers of that time had escalated into deepening enmity. The assassination of Franz Ferdinand on June 26 of that year set in motion a complex array of alliances and counter-alliances. Just over a month later, on August 4, German armies plowed into Belgium.

Of course, history never repeats itself exactly. But there are patterns. Like the Balkan conflict in 1914, Venezuela’s constitutional crisis is a local power struggle with a global dimension. So what do both sides look like? 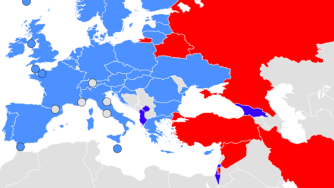 Europe’s compromise position: Recognize the authority of the National Assembly, but not yet the legitimacy of Guaidó’s presidency. In darker blue: the handful of countries already agreeing with the U.S. position.

Europe is on the fence, for now

Maduro is anti-U.S. and the U.S. is anti-Maduro. Following the ‘enemy of my enemy’ principle, the U.S. recognized Guaidó almost immediately after his self-proclamation, followed by most other countries in the Americas. Notable exception: Mexico, which initially took Maduro’s side, but has since moved into the neutral camp.

The main international allies of Venezuela are Cuba and Russia, which remained loyal to Maduro’s presidency; but he also got official support from other countries friendly to his regime: China, Iran, Turkey and South Africa, to name the most important ones. Regionally, Maduro can also count on the support of Bolivia, Nicaragua, El Salvador and Suriname.

Europe is colored light blue: The UK, Spain, Germany, France and most other EU members (plus a few other countries, including Ukraine, Norway and, further afield, Japan) have declared a compromise position. They support the National Assembly (run by the opposition and presided by Guaidó) but not yet the latter’s presidency. The UK, Spain, Germany and others have called on Maduro to call fresh elections. If he doesn’t do so within eight days, they will recognize Guaidó. 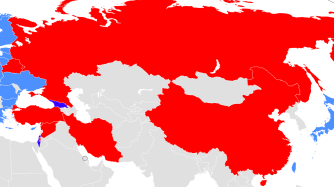 From Brest-Litovsk all the way to the Taiwan Strait, this is Maduro country.

In a number of cases, the Maduro/Guaidó split aligns with pre-existing local enmities: Palestine and Israel, Georgia and Russia, China and Taiwan – if one likes Maduro, the other likes Guaidó. Choices can also be markers of allegiance. The darkest blues in Europe (i.e. Georgia, Kosovo, Albania) are also arguably America’s most loyal allies in the region. Syria’s declaration for Maduro will have something to do with its alliance with Russia. Turkey, traditionally a U.S. ally, is siding with the other camp.

With the backing of globally relevant allies, and that of most of Venezuela’s military, Maduro is unlikely to agree to either the demands by the Europeans (for new elections) or the offer by Guaidó (of amnesty, if he leaves office peacefully).

Where does this go from here? On Saturday, U.S. Secretary of State Mike Pompeo told an emergency session of the UN Security Council that it was “time for other countries to pick a side”. One way to take the temperature of the crisis is to monitor this map on Wikimedia Commons, which is continuously being updated as countries do just that – pick sides.

Paradoxically, we lose wars because the world is peaceful and the U.S. is powerful.
Up Next
The Present

When did athletes get so rich?

Stephen Curry’s yearly salary is a cool $34 million. Where did all this money come from?