Europe’s population is ageing fast, and its younger generations are increasingly mobile. Both factors combine to explain the very uneven pattern on this map, showing in which regions the population is shrinking (blue), and where it is increasing (red).

It’s the first time an analysis of Europe’s population growth and decline has been mapped to such an extent (across 43 countries) and in such detail (at municipal level). The data used spans the first decade of the century.

As indicated by the large, dark blue spots on the map, the population has declined significantly between 2001 and 2011 in large areas of eastern and southern Europe. The regions most affected by population decline are the Baltics, the Balkans, and the Iberian Peninsula — areas hit particularly hard by poverty and unemployment, creating a population drain toward richer areas of the EU.

But even in the richer north, some areas are marked out by a noticeable population decline. Germany’s demographic crunch can be seen throughout the country, but especially in the east — contrasting sharply with areas of population growth just across the Czech and Polish borders. 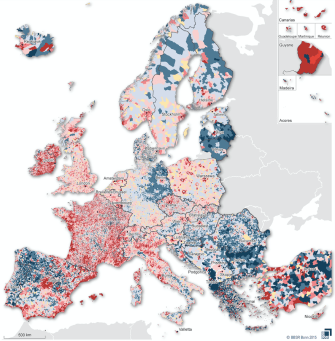 Rural areas are particularly prone to emigration and population decline. The large, sparsely populated north of Sweden and Finland are an obvious example, but the same process is taking place in the more densely populated interior of France.

Where are all those young, talented, unemployed people going? To the big cities and the urbanised areas of the north, mainly. Strong population gains can be seen in the Benelux countries, in the coastal zones of France and Spain, in London, but also, remarkably, in the north of Scotland and across Ireland.

To be fair, cities are booming everywhere, not just in the north or west. Also in the east and south, cities stand out as red dots in seas of blue (Budapest and Bucharest for example), or deep-red dots in seas of light red, like the urban centres of central and western Poland.

Although the pattern seems more exotic in Turkey, Europe’s closest neighbour follows essentially the same pattern: Rural areas are emptying, cities are filling up — only, Turkey has no fewer than 10 cities with over 1 million inhabitants, thanks to its still-booming population, hence the intense variation of red and blue. The largest Turkish city is of course Istanbul, at the heart of a deep red zone on the Bosphorus, which connects the Black Sea and the Mediterranean, and separates Europe from Asia.

Related
The Present
Radical idea: Redraw the U.S. map as a nation of city-states
While cities drive national economic growth, their political geography means they cannot effectively deal with inequality, poverty, and other socioeconomic problems.
The Learning Curve
Why do high IQ people stagnate in their careers? Emotional intelligence
Research suggests that emotional intelligence is more vital for success than IQ.
The Present
Even in the age of AI, some problems are just too difficult for computers
Computers are growing more powerful and more capable, but everything has limits
The Future
How the metaverse will revolutionize K-12 and higher education
Imagine going on a tour through the human circulatory system as a tiny cell. That is just one example of education in the metaverse.
Starts With A Bang
Ask Ethan: What are white holes, and do they really exist?
In General Relativity, white holes are just as mathematically plausible as black holes. Black holes are real; what about white holes?
Up Next
Surprising Science
Beware of ‘Tight Jean Syndrome’ Whilst Wearing Skinny Jeans
Consider the following tale of fashion gone wrong.