Every country is the best at something; even if it’s a bad thing, like murder, child marriages or spam email.

The aptly-named Information is Beautiful website has sifted through piles of data from the UN, the CIA, the Guardian and a bunch of other places to compile a world map that awards a gold star to just about every country on the planet (1). 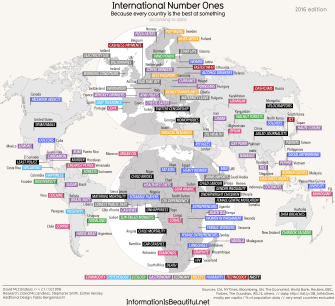 Some firsts are expected, or at least not surprising: Sweden is #1 in pop music, North Korea has more soldiers relative to its population than any other country, Cuba leads in doctors per capita and Afghanistan is the world capital of opium production.

Other world records we are storing for that pub quiz to end all pub quizzes. Fastest wifi: Lithuania. Most Facebook addicts: Canada. Most Scrabble players: Nigeria. Most languages: Zimbabwe. 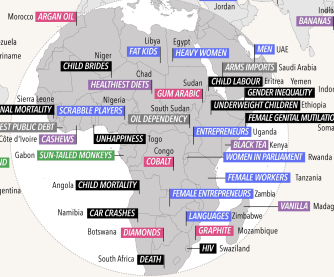 Most diamonds per capita: Botswana. 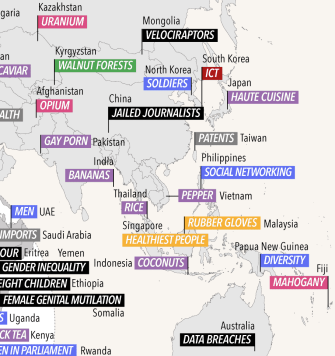 Healthiest people on the planet: Singaporeans

Scoring a distinction in the black category is a reverse compliment. Which country wants to be first in murders? None – but the accolade goes to Honduras nonetheless. Similar blemishes on national records are noted for Namibia (most car crashes), Eritrea (most child labour), China (most jailed journalists) and Mongolia (most velociraptors – although that can’t be a current problem. Can it?) 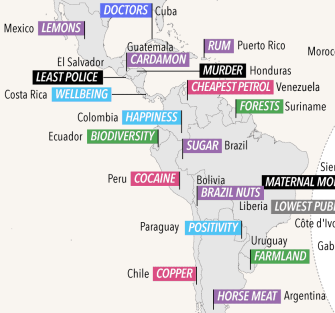 Looking at the map, one can’t help but feel that some countries could definitely benefit from being introduced to each other. Like Colombia (most happiness) and Togo (most unhappiness), Spain (highest LGBT tolerance) and Georgia (most homophobes), and Zambia (most female entrepreneurs) and Yemen (most gender inequality). 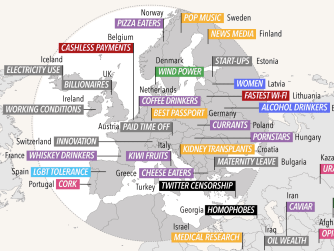 Talking of which, these stats may be fairly random, but there does appear to be something good going on in East Africa re gender equality: most female entrepreneurs, but also most female workers and most women in parliament.

And the U.S.? It leads the world in… spam emails. Take that, Nigeria!

Map found here at Information is Beautiful. Many thanks to Tanja Rutten for sending it in.

(1) Every country? No. As the compilers explain, “If your country is not on the image, it’s either because a) we couldn’t fit it in, or b) we couldn’t find something your nation is the best at (sorry!)”

Related
Life
Scientists use CRISPR to insert an alligator gene into a catfish
Disease kills off 40% of farmed catfish. This gene protects them.
Neuropsych
How you breathe affects your brain
Your breathing rhythm influences a wide range of behaviors, cognition, and emotion.
Health
What happens when regular porn watchers abstain for a week?
Researchers watched for signs of withdrawal — but didn’t find any.
Neuropsych
Daily caffeine intake temporarily alters your brain structure
Compared to people who took a placebo, the brains of those who took caffeine pills had a temporarily smaller gray matter volume.
Thinking
Why you should laugh at yourself, according to Seneca and Nietzsche
“It is more human to laugh at life than to lament it.”
Up Next
Hard Science
5 Reasons Why President Trump Should Build a Hotel on the Moon
As president, Donald Trump is uniquely positioned to bring America back to the Moon.