To us humans, the shape and location of oceans and continents seems fixed. But that’s only because our lives are so short.

For at least a few times already, all of our planet’s dry bits have come together to form a single, giant island in a single, giant sea. Roughly 200 million years ago, Pangaea was the last iteration of this recurring supercontinent (1). That deep history will repeat itself. In another 250 million years, we’ll have the next supercontinent. We’ve already got the name: Pangaea Proxima.

Here’s what our world will look like at that time: the Americas attached to Africa in the north and Antarctica in the south; Africa slammed into Europe and the Middle East; and Australia welded to Asia’s east. The giant continent is centred around the remains of the Indian Ocean, now an interior sea mirroring the former Mediterranean, with a boot-like India posing as a replacement Italy. 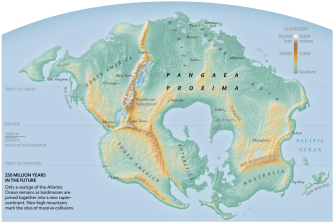 Where continents have collided, new mountain ranges have arisen. The world’s new high point is no longer located in the Himalayas, but in the as yet unnamed range that has sprung up where Florida and Georgia have slammed into South Africa and Namibia.

It’s unlikely that there will be any humans around to witness the reunification of the world’s land masses – we’ll be lucky to survive the next century, let alone the current millennium – but the map includes some present-day cities nevertheless, for your orientation.

Or more likely, for your disorientation. On Pangaea Proxima, Cape Town and Mexico City are just a day’s drive apart. Lagos is to the north of New York, and both are close to the Atlantic Sea, the shrunken remnant of the former ocean. And you could travel from Sydney to Shanghai and on towards Tokyo without having to cross a single body of water.

Europe has attached itself to Africa, and Britain – Brexit notwithstanding – has rejoined Europe. One thing has remained reassuringly the same: New Zealand is still an isolated place, forever threatening to fall off the bottom right part of the map. 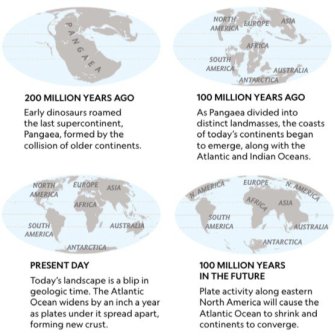 This map is featured in the new (July 2018) issue of National Geographic Magazine. More on that here. Thanks to Martin Foldager for sending it in.

(1) Earlier ones include Vaalbara, Ur, Kenorland, Rodinia, Pannotia and Gondwana.

Related
Hard Science
Some earthquakes last for seconds, others for minutes — and a few for decades
What do you call it when the Earth shakes for three decades?
Sponsored
What childhood “money story” is shaping your financial behaviors?
Here are the signs that you inherited “money anxiety” from your parents.
The Present
The “maritime Indiana Jones” who salvages shipwrecks now wants to tow icebergs
Simple physics makes hauling vast ice chunks thousands of miles fiendishly difficult — but not impossible.
Neuropsych
Inside the brains of aging dogs
In a citizen science project, thousands of pet dogs are helping scientists to understand what happens to memory and cognition in old age.
Neuropsych
The most common source of awe might surprise you
It’s us.
Up Next
Culture & Religion
The stress around money is damaging to our health. How do we stop it?
A new study from the Great Recession shows that anxiety around money is not helping us. How do we stop worrying?