What if Europe had been colonised like it has colonised the rest of the world? This is what the continent might have looked like: a map that completely ignores the history, culture and geography of the region. Boxy borders that are impractically straight and misplaced, countries that are tragically mutilated and/or hilariously misnamed.

On the Iberian peninsula, Portugal has been stood on its head: it still occupies two-thirds of the Atlantic coast, but has had to abandon the Algarve (its southern bit) while being given Galicia (the Spanish area to its north). Spain is no more, but divided into a bottom third, Andalusia; a middle bit called Castile; and a giant Catalonia, spilling across the Pyrenees into France.

Did we say France? We meant Gallia, the eastern half of our France. Gallia’s straight if slightly diagonal eastern border is boxed out to the east to include Paris, deprived of France, Gallia’s neighbour to the east. France gets most of Belgium, a good-sized chunk of Switzerland and a big bite out of northern Italy.

The rest of Italy is divided into Lombardia to the north and Italy to the south. The border between both seems to run straight through Rome, with at least the Vatican wholly Lombardian. Italy holds on to Sardinia, but Sicily is the independent state of West Lebanon. 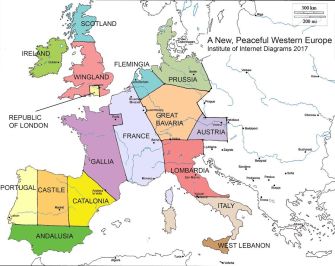 Austria looks like a horribly disfigured amputee, but at least it gets to keep Vienna. Great Bavaria occupies most of Bavaria, and southern Germany as well as bits of Switzerland, France, Belgium and the Czech Republic. To the north: Prussia. Containing Berlin, large parts of northern Germany, bits and pieces of Poland, and the Danish peninsula of Jutland but not the Danish islands.

Whats left of Germany is subsumed in a state that covers most of the Netherlands, but is named Fleminigia, presumably after the Flemish who occupy northern Belgium – most of which is now in France.

England? Forget it. You mean Wingland. Which also covers Wales but not Anglesey and has a straight border with Scotland that manages to place the Scottish city of Dumfries in England, and the English city of Berwick in Scotland. The south of Wingland is disfigured by a boxy Republic of London, which occupies an area just to the east of actual London. At least Ireland is united – although, presumably, not to the liking of some of the inhabitants in the north.

Stupid borders like these, demonstrate that the indignity of colonisation includes the imposed, wilful ignorance of the coloniser. Yet these borders have a habit of perpetuating themselves, even after these European colonies would have gained independence from their overlords. Even if they lead to unrest, instability and war.

For even artificial geopolitical entitities tend to develop power centres and structures that benefit from maintaining the status quo – if only because that power would disappear if their entity would be subsumed by a neighbouring one.

As has happened in Africa, for example: most of the current international borders dividing the continent are leftovers from the colonial era, when they were drawn with scant regard for the local situations and populations. Check #688 for what Africa might have looked like today if it hadn’t been colonised.

Many thanks to Robert Capiot and Juan Francisco Lehocky for sending in this map, found here at @KarlreMarks, the Twitter feed of Karl Sharro, “architect, satirist, and extremely bad cartoonist. Mostly Middle East stuff”. The map could therefore be construed as a comment on the Sykes-Picot Agreement, and the misery that its borders have caused in the Middle East. More on Sykes-Picot, and other arbitrary borders in the Middle East, here.

Ask Ethan: What should a black hole’s event horizon look like?

An illustration of a black hole. Despite how dark it is, all black holes are thought to have formed from normal matter alone, but illustrations like these are only partially […]