These two maps show the two starkly different countries that emerged from the latest U.S. presidential elections in November 2016. Trumpistan looks like a swiss-cheese version of America, but it is still yuuuge, and you can get around most of it without getting your feet wet. The bits left out form Clintonesia, a far-flung collection dry land, in some parts organised into island chains, but often stuck in the middle of nowhere, many days’ sail from likeminded places. 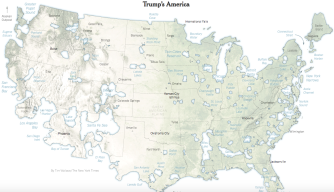 The U.S. professes to be one country, but each divisive presidential election gives map cartoonists ammunition to the contrary. After the 2004 re-election of George W. Bush, the Jesusland map meme captured the mood of exasperation on the losing side (see #3). The Democrat-leaning states were shown as having merged with Canada, leaving the Republican-voting states, a gigantic contiguous area (except for Alaska), free to go it alone as a Christian fundamentalist state.

At state-level, the presidential election maps for 2004 and 2016 aren’t that different: just add Colorado and New Mexico to the Democratic column, and Iowa, Wisconsin, Michigan and Pennsylvania to the Republican camp. To oversimplify: the West Coast and the Northeast remain solidly blue, the rest in between is mainly red.

Yet, by drilling down to voter preference on county level, these two ‘maritime’ maps present a very different view – and in doing so, generate the map meme that captures the country’s mood at this point in time. At that level, Trump won 85% (3,000,000 sq. mi) of the land area, leaving only 15% (530,000 sq. mi) of U.S. territory for Clinton. Despite the massive size advantage, Trumpistan is much less populated: home to only 46% of Americans (148 million), vs. 54% (174 million) in Clintonesia, which consists in large part of urban areas. 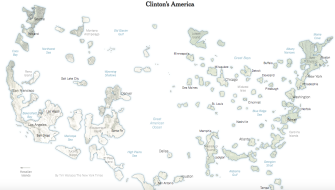 Showing the two sides each as separate island nations captures the sense of alienation and distance between both. The existence of the other is negated, submerged, reduced to lapping waves. On the Trumpistan map, pro-Hillary counties coalesce into nothing more than bodies of water: Las Vegas Harbor, the Santa Fe Sea, Des Moines Pond, the New York Narrows and the D.C. Delta. A similar nomenclature on the Clintonesia map shows the Wyoming Shallows, the High Plains Sea and the Great Bays (bye bye, Michigan). Not so much rival territory as another realm. Democratic islands in a conservative sea include Albuquerque Island, the Montana Archipelago and Isla Grande, in the south of Texas.

It is not the first time that a deep political divide has been portrayed as a surf-and-turf dichotomy. Some years ago, French mapmaker Julien Bousac drew up a map of Palestine as an archipelago, to illustrate the fragmentation and isolation of Palestine self-rule under Israeli occupation see (#370).

This map found here at the New York Times. Many thanks to Martin Foldager for sending them in.

They say that nobody understands quantum mechanics. But thanks to these three pioneers in quantum entanglement, perhaps we do.
Up Next

Storytellers Run the World: Welcome to the “Post-truth” Era

The “deep stories” that run your world are changing. The stories democracy and economics rely on aren’t working so well…