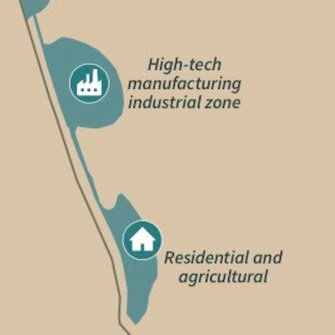 The Palestinians’ only gain: two zones ceded by Israel in the southern desert, one for ‘high-tech manufacturing’, the other for ‘residential and agricultural’ purposes.

Caught between a napkin and a conspiracy

“I say to Trump and Netanyahu: Jerusalem is not for sale,” fulminated Palestinian president Mahmoud Abbas in a televised speech from Ramallah. “Your (…) conspiracy will not pass.”

Meeting with such fury from one of the two parties it aims to reconcile, Trump’s Peace Plan, proposed in Washington DC with Israeli prime minister Benjamin Netanyahu in attendance, is unlikely to succeed.

But there is one major difference between this and all previous U.S. proposals to resolve the conflict between Israelis and Palestinians: it contains a map. And even if the Trump plan will follow all its predecessors into the dustbin of history, the map remains a significant first.

Never before has a U.S. administration officially proposed borders for a Palestinian state. Considering the close political concertation between the U.S. and Israel—its main ally in the region—it is safe to assume that those borders have been seen and approved by the Israeli side. Which would also be a first. Not that no borders haven’t ever been proposed, but they have never been published.

The Jerusalem Postcites the example of Ehud Olmert, when he was prime minister of Israel in 2008, showing Palestinian president Abbas a map during a private meeting. It showed Israel retreating from 94% of the West Bank (i.e. almost to the 1967 border), excepting some large settlement blocks. As an equivalent of the remaining 6%, land inside Israel was offered. Israel would also withdraw from East Jerusalem; the Temple Mount and the Old City would be placed under international control.

Due to the sensitive nature of Olmert’s plan—surely too generous for hardliners on the Israeli side—the Israeli PM did not want to hand over the map to Abbas, who sketched it onto a napkin after the meeting. The ‘napkin map’ became public in 2013. 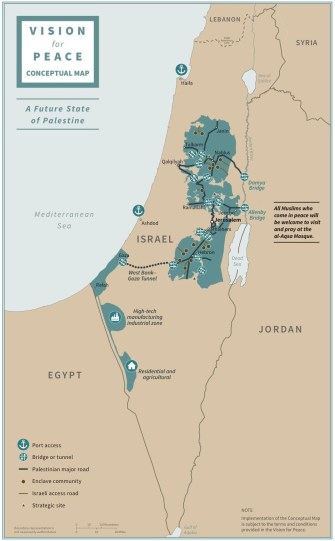 Under the Trump plan, Israel cedes 70% of the West Bank to the Palestinian state.

The ‘Conceptual Map’ in Trump’s plan is the first one ever published officially by the American (and/or Israeli) side. It is less generous than the Olmert plan:

President Abbas’s fury is understandable. This proposal turns Israel’s occupation and takeover of large parts of East Jerusalem and the West Bank into a fait accompli. But while the overall plan may fail, keep a good eye on this map. For the first time, it shows the extent of a Palestinian state that the Israeli state may feel comfortable living with. And that’s an important step. Even if this may not be a state the Palestinians may feel comfortable living in.

Increasing numbers of people are in pain. How do we cope?

A new study reminds us that physical and emotional pain are not far apart.