People who live in mountainous U.S. states are more introverted than their fellow Americans in the flatter states. That curious link between topography and personality is proposed by a recent article in the Journal of Research in Personality.

States on the left of the graph are flatter than states on the right; states at the bottom have relatively more introverts than states at the top of the graph. Alaska, by far the most mountainous state, is among the most introverted — only preceded by Maryland and New Hampshire (which are, however, much less incidented). North Dakota, America’s most extroverted state, is also one of its flatter ones. Extroversion runners-up Wisconsin and D.C. are almost pancake-flat too. 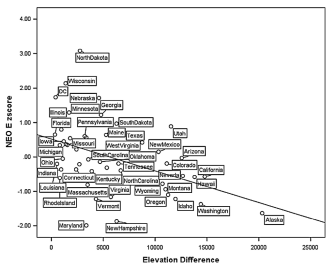 The graph does not explain whether people become introverted in a mountain state, or flat-state introverts have a tendency to head for the hilly parts of the country. The old nature versus nurture debate, in other words. But in a very strange context.

Full article herein the Journal of Research in Personality. Many thanks to Mark Feldman, who saw it mentioned here on The Washington Post’s Wonkblog.

Related
Starts With A Bang
Ask Ethan: What are white holes, and do they really exist?
In General Relativity, white holes are just as mathematically plausible as black holes. Black holes are real; what about white holes?
Life
Strange life forms create an “alien” ecosystem in an abandoned uranium mine
Slimy biofilms made up of bacterial and eukaryotic life forms have taken over an abandoned, flooded uranium mine in Germany.
Hard Science
Earth has an eerie “sodium glow,” and astronomers use it to image stars
Air currents in our atmosphere limit the resolving power of giant telescopes, but computers and artificial stars can sharpen the blur.
Health
How saliva changes the flavor of food
“It’s a liquid, but it’s not just a liquid.”
High Culture
Why are flood myths so common in stories from ancient cultures around the world?
Could the prevalence of flood myths around the world tell us something about early human migration or even the way our brains work?
Up Next
Technology & Innovation
What Amazon Is Getting Very Right About Its Workplace Environment
Disagreement helps prevent a company from becoming stale and succumbing to groupthink.