The so-called Muslim Travel Ban is President Trump’s most controversial measure yet.

The suspension of entry into the U.S. covers citizens of seven majority-Muslim countries, mainly in the Middle East. Comments by Trump indicating that he would exempt members of Christian minorities in those countries have fueled accusations that the measure specifically targets Muslims.

However, the travel ban does not include a few other important Middle-Eastern countries, also with a Muslim majority. To assume, as some have done, that the latter countries were exempted because the Trump Organization has vested business interests there would be to ignore former vice president Joe Biden’s parting advice: “Question a man’s judgment, not his motives”.

The ostensible motive of Trump’s executive order is “Protecting the Nation from Foreign Terrorist Entry”. However, as pointed out by CNN’s Fareed Zakaria on his show GPS, the total tally of Americans killed on U.S. soil by nationals of any of the seven countries is… zero. Or, as he quoted the list in full: “Iraq – zero, Iran – zero, Syria – zero, Yemen – zero, Libya – zero, Somalia – zero, Sudan – zero”. 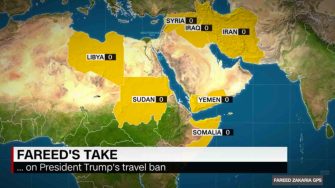 The figures quoted by Zakaria were produced by the Cato Institute, a conservative think tank. Comparing those figures to those of some countries left off the banned list: “That number for Saudi Arabia is 2,369, for the UAE is 314, for Egypt is 162, according to CATO,” Zakaria says. 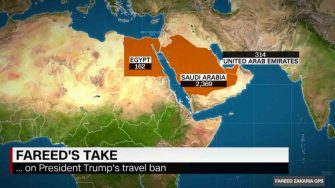 We could even benefit from more whataboutisms — if they’re used properly.
Thinking

Why, exactly, don’t you trust that person’s opinion?
13.8

Why is it so hard to understand what a theory is?

Even the dictionary doesn’t get the definition right.
Leadership

A new technique for analyzing networks can tell who wields soft power.
Thinking

Since at least 600 BC, people have been mesmerized by the concept of the infinite.
Up Next
The Present

How Basic Income Could Unlock Humanity’s Altruism and Creativity

Universal Basic Income an expensive system to be sure, but social justice commentator Eva Cox argues that the societal returns will be worth the investment.