Is belief in God a prerequisite for moral behaviour? The answer to that question varies widely throughout the world. As shown by this graph, most people in poorer countries will say yes, while no is the more likely answer in richer nations.

For those of a religious persuasion, the result validates the sentiment expressed in Matthew 6:24 — “Ye cannot serve God and mammon (1).” People of a more materialistic bent will take it as proof of Karl Marx’s maxim that “religion is the opiate of the masses,” at least as long as they can’t afford more expensive diversions.

It’s a strange map that makes close neighbours of Pakistan and Ghana, Russia and Chile, and Canada and Australia. What unites each pair is that they have similar attitudes toward God and morality, and comparable levels of per-capita income. 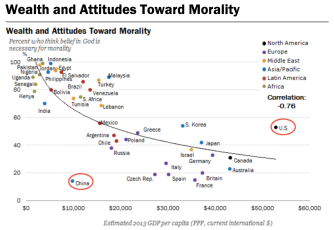 Pakistan and Ghana huddle together near the top left corner of the graph: poorest, and most religious (2). They are joined by a host of other low-income, high-piety countries, such as Indonesia, Jordan, Egypt, El Salvador, Nigeria, Uganda, Senegal, Kenya, and Bolivia. All have an average per capita GDP below $10,000. Religiosity is at or above 80 percent.

Russia and Chile are in the middle group of countries, together with Mexico, Argentina, Poland, and Greece. These countries are not very rich (average per capita GDP of about $20,000), but only half-religious (from just under 40 percent to a bit over 50 percent).

Canada and Australia are part of a more dispersed community of nations that also includes Italy, Spain, Israel, Germany, Britain, and France, with average per capita GDPs varying between $30,000 and $50,000, and levels of religiosity from below 40 percent to just over 10 percent.

Not all countries observe the median proposed by the graph too closely. India is quite poor, but relatively areligious. Malaysia and Turkey are relatively wealthy, but very religious.

But the two most remarkable countries on the graph are the two furthest outliers, each refuting one of both truisms quoted above. The U.S., the richest country of the bunch, is also way more religious than a lot of the other ones. It has the highest per capita GDP of any country on the graph — over $50,000. By that measure, its level of religiosity should be at 30 percent, around the median. In fact, it’s well over 50 percent.

And China, relatively poor, is atypically areligious. The average per capita GDP is almost exactly $10,000, which would imply a piety score of close to 70 percent. In fact, the score is just over 10 percent, the lowest of all countries shown, ex aequo with France, equally areligious, but much richer.

Why are Americans more religious than Greeks, whose income is less than half of theirs? And why are Chinese, who are poorer than Brazilians, less than a quarter as religious? Perhaps both Marx and Matthew got it wrong…

This map found here at the Pew Research Center.

(2) For the purpose of this text, ‘thinking the belief in God is necessary for morality’ is equated with ‘religiosity’. Doubtlessly, those big on God and/or morality will have a more nuanced view on the matter.

It is through speaking and listening that human beings become who they are.
Up Next
Culture & Religion

Nick Lane believes he can explain the “black hole” at the heart of biology. And in the process predict traits that even alien life will have. Here are some amazing facts from biology.