Never mind whether you regularly visit a place of worship: do you consider yourself a religious person? Yes, said 62% of 60,000 people across 68 countries polled by WIN/Gallup for a survey published in 2017. Back in 2005, the score for that answer was 77%.

Minus 15 percentage points in just 12 years – that’s a fairly steep decline. Does that mean that atheism is gaining ground worldwide? Yes, but not by as much as these figures seem to suggest, for three reasons.

Firstly, because there’s a large and growing middle between those who positively believe in God and those who positively don’t. In 2005, just 5% of those surveyed in 2005 considered themselves ‘convinced atheists’ – the remaining 18% were non-religious or ‘don’t knows’. In 2017, the fish-nor-fowl brigade had grown to 30%. ‘Convinced atheists’ had increased as well, but only to 9%.

Secondly, because our beliefs are not necessarily coherent. People may believe in aspects of religion even if they don’t consider themselves religious (and vice versa). As other results from the survey show, a higher percentage than those who say they’re religious believe in a soul (74%) and God (71%). Inversely, a lower percentage believe in things that many theologians would say are essential to religion, such as heaven (56%), hell (49%) and life after death (54%).

And thirdly, the battle between God and his Absence for a share of mankind’s mental space is not just a linear retreat of divinity before materialism. A 2012 WIN/Gallup poll showed a lower share of religiosity (59%) and a higher share of atheism (13%) than the more recent one.

While most of us consider our beliefs (or lack thereof) a highly personal matter, what the successive WIN/Gallup polls also clearly show is that a number of external factors predict whether or not we believe in a Supreme Being.

As these maps of atheism around the world show, geography also is a factor. For cultural, social and/or political reasons, some countries have a much higher degree of atheism. Europe is a regional hotbed, but even here, direct neighbours may be at great variance. 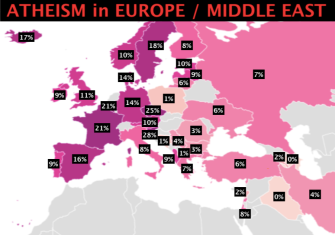 The most godless country in the world, however, is China. According to the survey, fully 67% of respondents in China considered themselves ‘convinced atheists’ – more than double the percentage in the world’s second-most atheistic country, Japan (29%). South Korea, at #5 in the ranking (with 23%) is another East Asian centre of atheism; but 18 of the other 20 leading countries are in Europe. 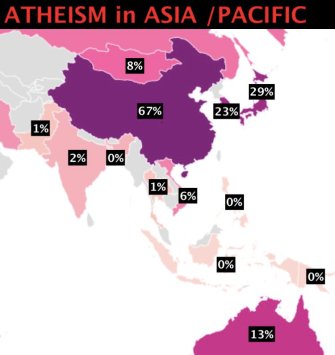 The only non-European countries this high up in the list are Australia (13%) and Canada (10%). At the same time, Europe is home to some of the least atheistic countries in the world (or at least in this survey): Bosnia, Macedonia and Poland only have 1% atheists, Bulgaria and Romania just 3%. 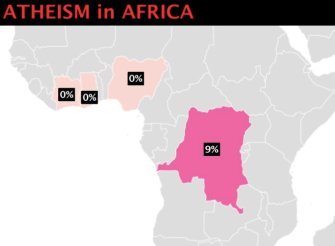 Outside the developed world, there are some surprisingly high scores, for example for DR Congo, with 8% atheists (the only three other African countries on the list, Ivory Coast, Ghana and Nigeria, score 0%).

Mexico is another regional champion, its 8% atheists outperforming all the other Latin American countries marked on this map (all scoring 2-3%). The darker-coloured patch just north of Brazil is French Guyana, which is counted as part of France. 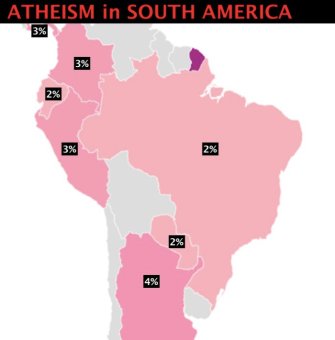 And what about the U.S.? America scores 7%, which is near the median, and in the company of Greece and Russia. Americans are only slightly less atheistic than Israelis, Finns and Mongolians (all 8%), and slightly more so than Ukrainians, Lithuanians and Vietnamese (all 6%).

If, as the saying goes, there are no atheists in foxholes, then there must be plenty of foxholes in Iraq, Azerbaijan, the Philippines, Indonesia and Papua New Guinea – all countries with 0% atheists. 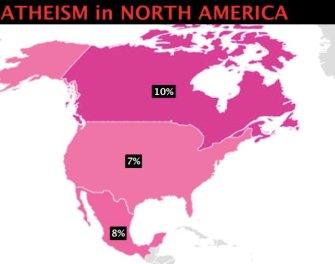 There’s just a little more room for unbelief in Pakistan and Thailand (both 1%), and Lebanon, India and Armenia (all 2%). The scores in fairly secular Argentina and Serbia are still fairly low (4%), but 1 in 25 inhabitants of the Islamic Republic of Iran also consider themselves a ‘convinced atheist’.

The relatively low scores for atheism don’t necessarily mean that religion has an unassailable position – far from it. Many places have very high scores of ‘non-religious’ people. However, that category is broad enough to encompass both believers who think of themselves as non-fundamentalist, non-believers who feel the need to obfuscate their disbelief, and anyone in between. 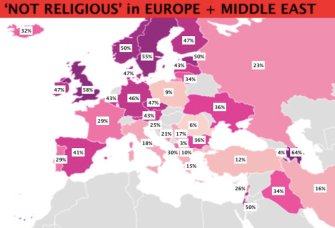 It’s no surprise that highly secularised societies such as Sweden (55%) and Australia, Estonia and Norway (all 50%) score near the top. A somewhat bigger surprise is that they’re all overtaken by Vietnam (57%) and Azerbaijan (64%). Britain (58%) is in second place worldwide.

As with the atheism ranking, most high scores are achieved in Europe (leaving little room for the explicitly faithful): Ireland, Finland, Denmark and the Czech Republic all score 47% (as does Canada). They’re followed by Germany (46%), Belgium, Austria and Latvia (43%) and Spain (41%). 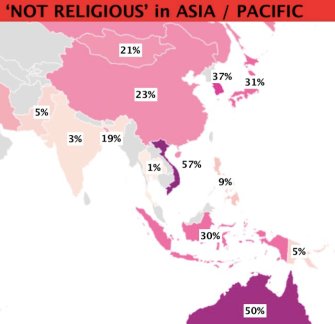 That puts the non-religious share of Iraq and Indonesia, both perceived as strongly Muslim nations, ahead of those of more secular countries such as France and Portugal (29%), Mexico (28%) and Slovenia (25%), and both Russia and China (23%). 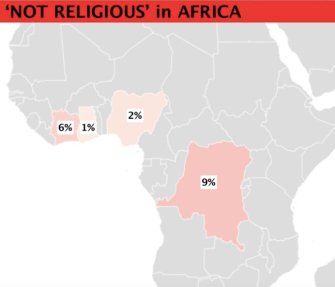 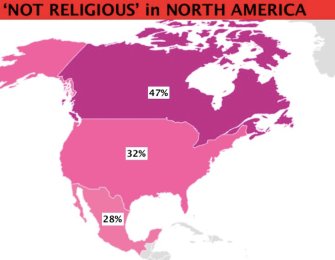 Aggregating all scores, the WIN/Gallup poll found that the least religious countries were China, Sweden, the Czech Republic and the UK, in that order. Most religious: Thailand, Nigeria, Kosovo and India.

As mentioned, being religious and believing in God are not entirely the same (at least from a statistical point of view). In five countries, fully 100% of respondents expressed their belief in God: Azerbaijan, Ghana, Indonesia, Kosovo and Nigeria.

And the various Scandinavian state churches report membership of between 60% and 85% of their national populations, while most Danes, Norwegians and Swedes consider themselves to be non-religious or full-blown atheists. 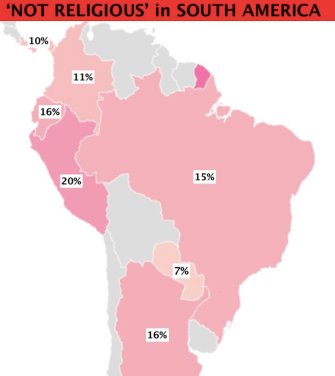 Some astrobiologists believe life is rare, while others believe it is common in the Universe. How can we find out which view is correct?
Up Next
Surprising Science

What makes you want to eat even when you’re not hungry? Scientists at UCLA now know exactly why.