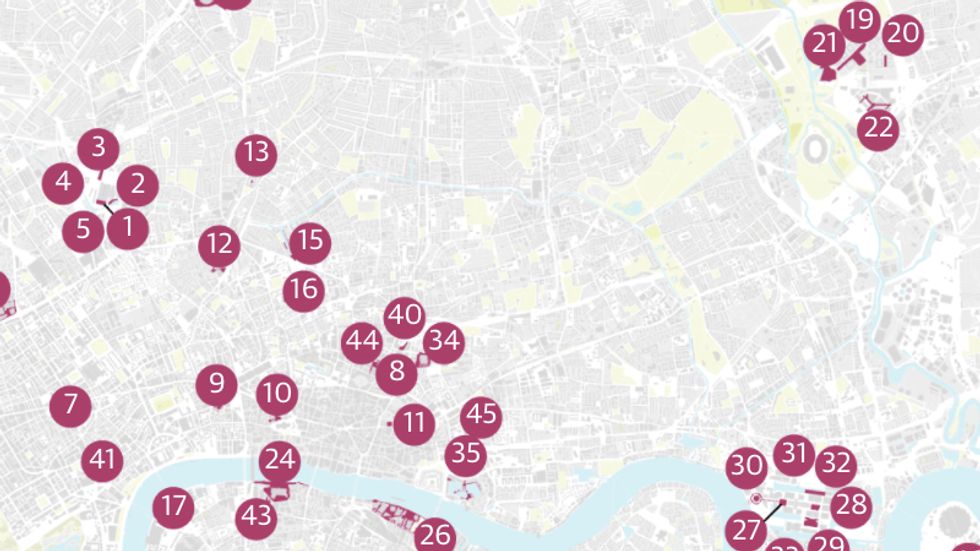 London’s public spaces are undergoing a quiet but profound transformation. An increasing number are, in fact, no longer public.

About 50 of these ‘privately-owned public spaces’, or Pops, have now been identified by the Guardian newspaper on this, the first comprehensive map of these areas. Many are in busy parts of the city centre, and are traversed by countless Londoners every day.

Not that they’d notice. Most Pops are not signposted; people generally only become aware of them when they break the rules that govern these spaces. Those rules are drawn up by their private owners, and are usually as un-advertised as the exact borders of each Pops. Quite often, they proscribe activities that are perfectly legal in ‘genuine’ public spaces: taking a picture, doing an interview, protesting, taking a nap.

One of these twilight zones of civil liberty is the More London estate. Located on the south bank of the Thames close to Tower Bridge, it surrounds London City Hall, the democratic heart of the British capital – home to the directly-elected Mayor, and the 25-seat Assembly that scrutinises him. But the area around the egg-shaped building is owned by the Kuwait Investment Authority, the sovereign wealth fund of the emirate.

As a Guardian reporter found out in person, More London’s private security guards can and will stop interviews on the estate. In fact, they told him that they can prevent any kind of unsanctioned journalistic activity – but refused to reveal the exact extent to which other ‘normal’ rights and liberties were restricted on the property.

The newspaper quoted Daniel Moylan, Conservative councillor in Kensington & Chelsea and Chairman of Urban Design London, complaining about the creeping democratic deficit caused by this and other ‘pseudo-public’ spaces:

"It’s extremely worrying (that) private landowners have the power to coerce us in what appear to be public streets and squares. If they have power over us then we must at least know what those powers are, where they get them from, and how they are held accountable".

London has long had a complex and problematic relationship between the private ownership of land and its public use – see entry #820 on this blog for more on the ‘landlordism’ "sucking out London’s lifeblood".

The Guardian recalls that large areas of Belgravia, Marylebone and Pimlico were fenced off in the 19th century. Only after lengthy legal battles were these ‘gated communities’ opened up to public access and scrutiny. Yet even today, hundreds of so-called garden squares in central London remain off limits to all except local residents.

Nevertheless, the trend in London has long been towards more public oversight of urban space. Only in recent years has that trend started to reverse. Local authorities, keen to save money on the design, upkeep and policing of public spaces, have ceded those prerogatives to the developers of large real estate projects such as Canary Wharf on the Isle of Dogs and Nine Elms in Battersea.

Virtually all large developments under way or planned contain some form of privately-owned public spaces. Some academics, comparing the current phenomenon with the privatisation of common lands in the 17th and 18th centuries, are even calling this the era of 'urban enclosure'. Indeed, if the process continues unabated, one could justifiably wonder whether genuine public space, with all the rights and liberties attached to it, will become an exception rather than the rule.

'Pseudo-public' spaces are an inevitable by-product of modern cities, in which privately-owned open spaces are accessible for the public to use the facilities (shops, bars, etc.) on offer. And indeed, some commenters on the article in the Guardian prefer these pseudo-public spaces to some of the less well-maintained and not so closely-monitored 'genuine' public spaces elsewhere.

Even so, the problem remains that unaccountable corporations – often based outside the UK – dictate rules of behaviour, which they can change as they please (or which staff on the ground can make up as they go along), without clear oversight in the interest of the general public. Some examples:

Confronted with the creeping privatisation of public space, London Mayor Sadiq Khan has promised that the next update of the London Plan – a document outlining the city’s urban development strategy – will contain a commitment to maximising access to Pops, while minimising the restrictions they impose on those who enter into them.

But a good start would be to know how many of those spaces there are. Other major cities, including New York, Toronto and Rotterdam, have registers of similar ‘pseudo-public spaces’ (see #441 for more on San Francisco’s version). London lacked one, until now. In cooperation with the Greenspace Information for Greater London (GiGL), the Guardian has drawn up the first comprehensive map of London’s Pops. Some extracts from the database:

The map is based on data reluctantly provided by local authorities and landowners themselves. The paper has invited the general public to add to the database - more on which at this GiGL page.

Images from the Guardian article on Pops. Many thanks to Jeremy Hoogmartens for sending it in. The article is part of the Guardian Cities series. Click here for access to GiGL.