The City States of Europe

Is this a map of Europe's future? 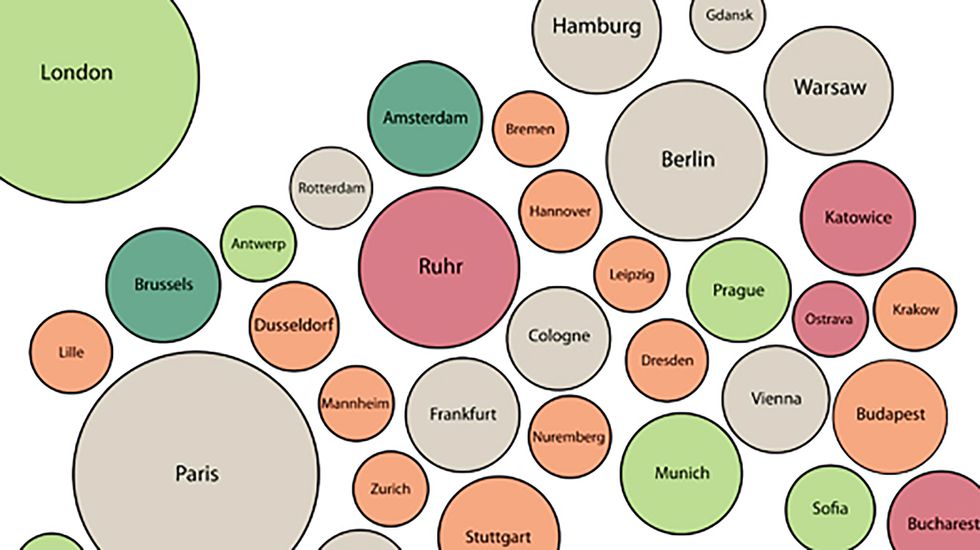 "The 21st century will not be dominated by America or China, Brazil or India, but by the city," writes Parag Khanna (1). The author of several books on global strategy, Khanna argues that (some) cities, as islands of good governance in an increasingly unstable world, will become the cornerstone of a new world order.

That new world order won't be a "global village" of nation states, for globalisation is corroding national sovereignty. Rather, it will be a loose network of semi-independent city states, perhaps resembling the Hanseatic League and other medieval trading alliances.

In all, Europe (2) counts 305 cities with more than 200,000 inhabitants, and 99 metropolitan areas with over 1 million people. The biggest of these metro areas have far outgrown their historical urban cores. Metro London has a population of around 13.6 million, of which only 24 percent live in Inner London. Of Metro Paris' 11.9 million citoyens, no more than 19 percent live inside the historical boundaries of the ville de Paris. Numbers three and four are both in Spain: Madrid (6.4 million) and Barcelona (5.4 million). Five and six are German: the Ruhrgebiet and Berlin (both around 5 million).

This map (3) shows the largest of Europe's conurbations. While maintaining the geographical shape of the continent, the map both erases national boundaries and shows with an immediate clarity which are Europe's major urban centres: London, Paris, and Istanbul — all counting more than 10 million inhabitants. Then come the Spanish and German megacities. Athens and Italy's three biggest cities are the only other larger conurbations. The rest of Europe is dominated by mid-sized metropolises such as Frankfurt, Birmingham, Budapest, or Lisbon, or smaller ones like Antwerp, Gdansk, or Bilbao.

For much of the 20th century, urban growth seemed a thing of the past, at least in Western Europe, where historical urban cores had been emptying out. Inner London lost 55 percent of its inhabitants between 1911 and 1991. Paris has shrunk by more than 25 percent compared to 1921. Copenhagen's population diminished by 35 percent over a comparable stretch of time. Most of the population drained away into suburbs and exurbs, effectively extending urbanity to well beyond the core city (see also #534).

Since 2000, this "urban draining" has been reversed, largely as a result of migration from beyond national borders. However, not all urban areas are growing at the same speed — or are growing at all. All of Italy's and Greece's urban centres are losing inhabitants, as are the Ruhr and Katowice, Ostrava and Bucharest. Biggest winners? Istanbul and Ankara, plus two other Turkish cities, and Brussels and Amsterdam — all gaining more than 2 percent p.a. Growing more modestly, at 1 percent, are the English and Scandinavian cities, and a scattering of towns across Europe and Turkey.