A Jewish state in Alaska? 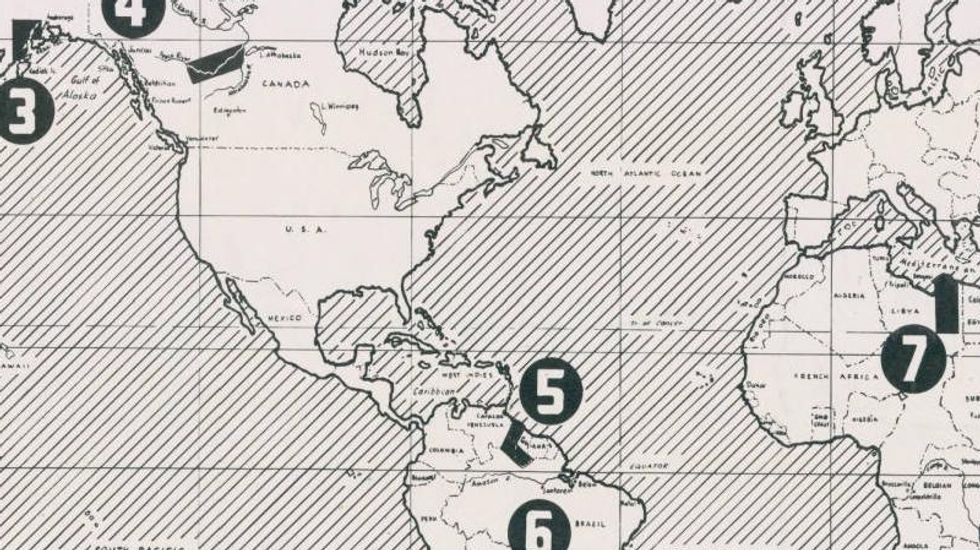 A Jewish state? Sure: in Australia, Libya or Guyana. Or half a dozen other remote places, on just about any continent. But… not in Palestine. This map is the brainchild of Joseph Otmar Hefter, a figure as forgotten today as the politics he espoused in the 1930s – non-Zionist Jewish territorialism.

Little evidence remains of Hefter's dream of Nai Juda ("New Judea") except 'Room for the Jew!', a pamphlet he produced in New York in 1938. It contains his answer to the Jewish question: a sovereign homeland with all the trappings of statehood - a flag, laws, and a national language (Yiddish) and even a national hymn.

(“March, Nai Juda / from the lands of strangers / build anew a home for yourself / and industries and farms // March, march stoutly / ring the bells of freedom / show the world that you are strong / proud and undefeated”)

In the nineteenth century, a significant portion of the Jewish people opted for Zionism as a way out of what they saw as the Jewish problem. That problem was that they were a nation without a country. Zionism's answer was a Jewish state in Palestine, the historic homeland of the Jews. In 1948, propelled by the Nazis’ own, more sinister attempt to solve the Jewish problem, Israel was founded and Zionism achieved its goal.

Yet this Palestine-focused version of Zionism was but one of many Jewish territorialist projects – there were about 30 such proposals throughout the 19th and early 20th century, historians reckon, although most were never more than utopian slogans.

One of the best-known Jewish territorialist projects not focused on Palestine was the Uganda Plan. Presented by Theodor Herzl at the Sixth Zionist Congress of 1903, it fell only six votes short of a majority. Another was/is Birobidzhan, established by Stalin in Siberia as a socialist haven for the Jewish people in the Soviet Union (see #333). The faint echoes of a third proposal, for a Jewish homeland in Alaska, provided the setting for Michael Chabon’s 2007 alternate-history noir detective novel, 'The Yiddish Policemen’s Union'.

Hefter's Nai Juda movement was to be the nucleus of a Jewish state, to be established somewhere in the Americas. At least according to a pamphlet distributed by Nai Juda, from its 'National Headquarters':

The NAI JUDA movement is now signing up able-bodied young men and women willing to join a JEWISH ARMY of SOLDIER-SETTLERS for service in a new Independent Jewish State within the American Hemisphere. Service will include opening up a large unoccupied territory to settlement and civilization, police and border patrol duty, farming, construction, roadbuilding. Volunteers who pass physical fitness requirements will receive free training in agriculture, engineering, transportation, aviation, seamanship and military defense. In the new Jewish State each soldier-settler will be given a house and four acres of land for live in accordance with the NAI JUDA program.

Further information and application forms may be obtained in person or by mail from Joseph Otmar Hefter, National Leader, New York.

Hefter’s call to arms had virtually no effect; even so, he was singled out for criticism in the November 1938 issue of The Jewish Veteran. In it, J. David Delman, National Adjutant of the Jewish War Veterans of the United States wrote:

From time to time, we have informed our readers about proposed new state for Jews. Last month one Oscar Hefter (sic) opened up headquarters, appointed himself “National Leader” and has proceeded to give interviews to the press. He stated that the locale of the new state is in Central America, that the financing thus far has been private and that he is recruiting young Jews as soldier pioneers to the new state which will be named Nai Juda. He claims to have 100 recruits but expects to have a nucleus of at least 1,000 trained and equipped recruits to start life in his Utopia. He hopes to absorb at least a third of the Jews in the world. Such is the chaos in Jewish life, that an unknown personage, not backed by any responsible organization, can negotiate and make deals – all in behalf of the Jewish people.

A year later, Hefter seems to have shifted his sights from Central America to the northern reaches of the continent. On September 11, 1939 – ten days after the Nazi invasion of Poland, but well before U.S. entry into the war – the 'National Leader' addressed a letter to president Roosevelt:

On behalf of the NAI JUDA MOVEMENT (to train American Jews for pioneering and frontier service in undeveloped regions of the Western Hemisphere) of which he is founder, requests permission to recruit, organize, train and equip for immediate active service an American-Jewish Border Regiment under the U.S. Army command, to be stationed preferably in a strategic location along the frontier of Alaska.

He strategically omits the ultimate goal of his movement – a Jewish state – but to no avail: the letter was “respectfully referred to the Secretary of War” and Hefter’s spontaneous offer was not acted upon.

After the war – and after the foundation of Israel, which rendered moot Hefter’s struggle for a Jewish home outside Palestine – he abandoned politics and focused on graphic design. He married a Mexican woman and moved south of the border, where he went on to produce a series of authoritative renderings of historical uniforms, collected in The Mexican Rurales 1830-1930 (1960),  El soldado de Juárez, de Napoleón y de Maximiliano (1962), Cronica del traje militar en Mexico del siglo XVI al XX (1968), The army of the Republic of Texas (1971-‘74), and other works of reference.

He died in 1974 in Cuernavaca, two hours south of Mexico City – by some accounts, after having been abandoned by his wife in hospital – his dreams of alternate Jewish nationhood obsolete and forgotten.

In 2011, Where To?, an exhibition at the Israeli Center for Digital Art on forgotten ideological currents in modern Jewish thought included Hefter and his work – but it merely managed to demonstrate how little evidence remains of Hefter's 'lost option' of Jewish territorialism, and of its inspirer himself.

Only the broadest outlines of Joseph Otmar Hefter's life can be described with any certainty. He was born at the end of the nineteenth century in Austro-Hungary, emigrated to the U.S. and spent the last decades of his life in Mexico, working as a graphic designer. A documentary about Hefter, titled Faktories und Felder and produced for the aforementioned 2011 Israeli exhibition, eventually had to change course and turn into a speculative biography, for lack of hard evidence.

Claims that he studied art in Vienna and served in the Austro-Hungarian army during World War I could not be verified. The same goes for even wilder claims – that he at some point was a settler in the North American wilderness, a CIA spy, an engineer in French Indochina, a target for right-wing groups in the U.S.

What little remains of his grand scheme is contained within his 1938 pamphlet, the full title of which is: 'Room for the Jew! A demand for a free and sovereign Jewish state - A permanent way out of Jewish dispersion & distress'. In it, Hefter explains his opposition to mainstream Zionism, which sought to establish a Jewish state in the ancestral homeland of the Jews, Palestine. He found that goal

"(…) anachronistic, insincere, unjustified, politically and economically untenable and unfair. Physically, the Jews have outgrown Palestine. What may have once been a land of milk and honey to a hundred thousand liberated Egyptian slaves is but a slippery toehold to the teeming millions of 20th-century Jews. Politically and economically, a Jewish Palestine would mean subjugating a native Arab majority to the rule of a minority imported from abroad".

This map seems to be from a later date, some time between 1939 and 1945, as Hefter – now based in Los Angeles - refers to the 'present catastrophic war'. He writes:

Recent history-making conferences disclosed no thought and made no open attempt to find a way out of one of the most persistent and most grievous international issues: the Jewish Problem. Failure to bring to a bold and permanent solution the explosive abnormality of the nameless, homeless, roaming Jewish nation will aggrevate (sic) the New Peace even more than it aggrevated the tragic period before the outbreak of the present catastrophic war.

This map presents a selection of ten territories. Any one of them can be sold or assigned by the land-holding Powers to the Jews. On any one of these, or on similar territories elsewhere, the Jews can establish an independent, sovereign, democratic Jewish Nation and a Jewish State of their own. Many precedents exist.

The resurrected Jewish Nation and State, this NEW JUDEA, is by no means intended as a mere refuge or shelter for persecuted or exiled individual Jews. It is to be a politically recognized country for all those Jews who have the courage to stand up and identify themselves as members of the Jewish Nation; for Jews who are ready to throw off the sordid comforts and the treacherous security of “minority rights” and to exchange them for the hard-won dignity and the solid shield of national independence.

Seven of the outlined territories have, at one time or another, been under discussions and negotiations for Jewish settlement. The fate and future of the Jewish Nation is not chained to any specific piece of real-estate. The Jewish Nation will live and grow and march to new greatness on any territory it can win or acquire for this historic purpose from the World.

JEWS HAVE A RIGHT TO DEMAND: A FAIR EXCHANGE

* INDEPENDENCE instead of Tolerance

* SOVEREIGNTY instead of Minority Rights

* SELF-RELIANCE instead of Protection

* DIGNITY instead of Sympathy

The Ten Territories here indicated, are suggestions made toward the earliest establishment of AN INDEPENDENT JEWISH NATION IN A SOVEREIGN JEWISH STATE in accordance with the proposals as outlined in the JEWISH INDEPENDENCE MANIFESTO.

Each one of these regions comprises about 50,000 square miles. The above projects, as such, are not official, nor were they, in this presentation, formally submitted to the governments of the described areas. But they present clear, tangible proof that there is an abundance of uncontested, undeveloped, unpopulated land on which a Jewish Nation and State can be established without alienating, crowding, imposing or displacing other populations and without injuring the integrity, wealth, stability or future of the affected nations, governments, states or regions.

The regions listed on the map are described as follows in the legend:

Map found here on Reddit. More here on the exhibition in the Israeli Center of Digital Art. Watch the Faktories und Felder here.