Choose Your Poison: a Map of the 'Square Mile' for Antiglobalist Protesters

"Print this map. Get off the internet. Take to the streets." 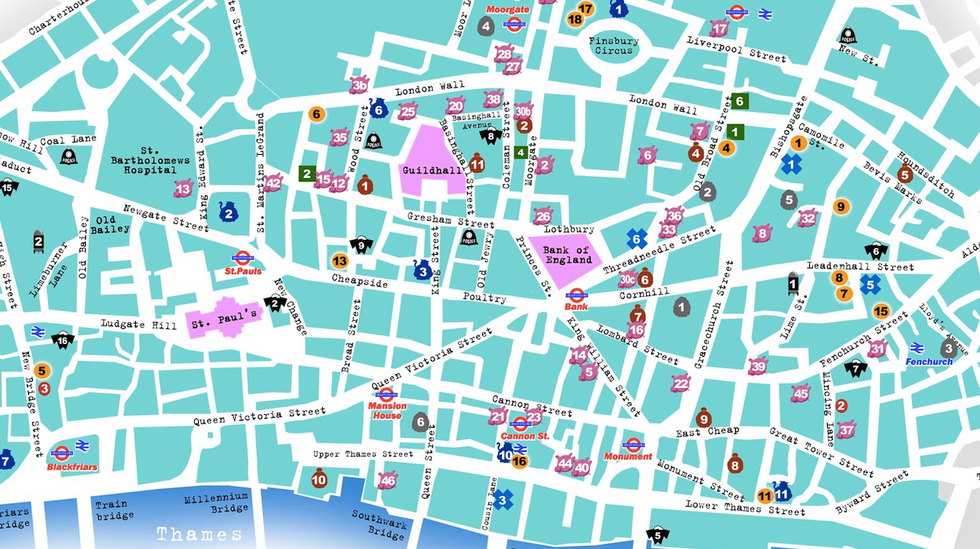 "A3 is the best size for the Square Mile map, so for those without A4 printers, there are two A4 versions you can print out and stick together with old-fashioned sticky tape."

Instructions to print out a map hardly sound like a subversive act, but that is exactly the idea behind this representation of the City of London, aka the Square Mile. Small in area, the City is packed with financial institutions, corporate headquarters, and other nodes of global economic power.

Which is why the city was a target of the massive protests that accompanied the G20 summit when it descended on London in 2009. The world leaders talked turkey in lockdown in ExCeL, the gigantic exhibition center in the east of London. So the thousands of protesters turned to the center of the British capital.

With concerns ranging from government inaction on climate change over rampant capitalism to the dysfunctional war on terror, there were plenty of places available to vent anti-establishment displeasure.

Ostentatiously built and obtrusively located, the Bank of England was a prime and obvious target. But global power has learned to use urban anonymity to its advantage. To quote C.S. Lewis in his preface to The Screwtape Letters:

"The greatest evil is not now done in those sordid 'dens of crime' that Dickens loved to paint. It is not done even in concentration camps and labour camps. In those we see its final result. But it is conceived and ordered (moved, seconded, carried, and minuted) in clean, carpeted, warmed and well-lighted offices, by quiet men with white collars and cut fingernails and smooth-shaven cheeks who do not need to raise their voices."

Hence this map, which lists villains in different categories, hiding in plain sight behind small copper plates screwed to smart glass buildings. Each of the categories has its own symbol, making it easier for protesters to direct their anger at their kind of villain.

"These maps show where it all happens — from the Stock Exchange to the Bank of England, from corporate law firms to biofuel companies, from investment bankers to carbon traders, from arms companies to the fortified conference centre — these corporations and institutions are the real force behind the governments of the G20," says the website that (still) distributes the information. "Print this map. Get off the internet. Take to the streets."

A blue fat cat denotes Energy & Other Corporations, including BP and BT, supposedly grouped together because of their eagerness to overcharge the consumer for their products and services. That would explain why Ben & Jerry's (parent company: Unilever, 100 Victoria Embankment) is explicitly included.

A big red bag of money marks out Financial Associations like the Association of British Insurers (51 Gresham Street), the British Bankers Association (105-108 Old Broad Street), but also the Tea Brokers Association (8 High Timber Street). Did Britain narrowly escape having its own Tea Party?

A nondescript grey blob hovers over a handful of Trade & Other Associations, including the American Hardwoods Export Council (3 St Michael's Alley) and the Institute of Risk Management (6 Lloyd's Avenue). Imagine the irony of setting fire to their offices.

The map also shows a handful of Ratings Agencies (red dot, as for Moodys, at 2 Minster Court on Mincing Lane); companies involved in the Arms Trade (a black bomb, e.g., Kroll Associates at 10 Fleet Place); Auditors (purple triangle, like KPMG at 8 Salisbury Place); and Exchanges (blue cross, for the London Stock Exchange at 10 Paternoster Square and for others).

All of this information is publicly available. Collated into a map aimed to guide thousands of antiglobalisation activists, it becomes a powerful tool for political agitation.

Or it would have been, had not the Metropolitan Police used tactics like 'kettling' — cordoning off a large number of protesters for an indefinite period. The eagerness of the police to use physical force to contain the protests contributed to the death of Ian Tomlinson, a newsagent who died within one such police cordon after being shoved and clubbed by a police officer.

The pen may be mightier than the sword, but at the London G20 protests, the police baton proved more consequential than this map.