Take look at a map of Turkey and you’ll have to agree: it’s a curiously box-shaped country. Why is the wrong question. Like most international borders, Turkey’s are the result of geopolitical accident, not of aesthetic or geometric design. A more pertinent query: How rectangular is Turkey? Is it, perhaps, the most rectangular country in the world?

To answer that question, you’d have to find a dataset that minutely describes the borders of all countries on Earth and devise an algorithm that compares each country’s shape to an optimum rectangle with the same area.

That’s exactly what Australian geo-statistician David Barry did. His conclusion: Turkey is only the 15th most rectangular country in the world. The winner: Egypt.

Inevitably, one esoteric geographical question led to its opposite: What is the roundest country in the world? That one was answered by Gonzalo Ciruelos, an Argentinian mathematician. The top of that ranking is Sierra Leone.

As the winners in both categories indicate, Africa is a country of great diversity in geopolitical morphology. But the most curious country in either ranking is… the Vatican. As it turns out, the Papal State is both the 4th roundest and the 2nd most rectangular country in the world. How is that possible?

First, let’s have a closer look at the results. In Mr Barry’s definition, ‘optimum rectangularity’ is the maximum percentage overlap of a country with a rectangle of the same area.

He’s the first to admit that his algorithm may be inadequate for some countries with complex shapes (“Italy looks like the biggest country that might be wrong”), scattered geographies (e.g. Norway, because it includes Bouvet Island, a Norwegian dependency located between South Africa and Antarctica, freakishly far from the motherland) or locations on either side of the 180° longitude meridian (New Zealand, United States, Russia).

Cutting through empty deserts, Egypt’s eastern and southern borders are completely straight—the Bir Tawil Trapezoid (2) is a notable but statistically insignificant exception. Combined with a fairly straight Mediterranean coastline in the north and its only slightly slanted Red Sea shore in the east, Egypt gets a ‘rectangularity’ score of 0.955 (out of 1), and the first place. 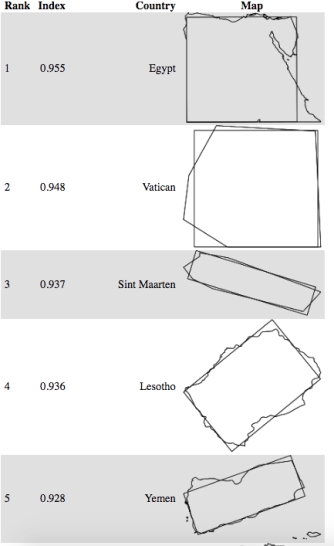 The Vatican’s actual borders are a lot more varied than this boxy rendition—perhaps because the database wasn’t built to reflect the delineation of the world’s smallest state in the greatest possible detail. That may explain why the geopolitical headquarters of the Catholic church manages to rank second in this list.

Smallness and concurrent lack of detail may explain the high score of Sint-Maarten, one of the Dutch dependencies in the Caribbean, but not of Lesotho—a much bigger enclave state inside South Africa—nor Yemen. Currently torn by a vicious civil war, the latter country may yet dissolve back into North and South Yemen, as was the case until 1990. Its constituent parts would likely tumble far down the global rectangularity rankings, perhaps the most trivial effect of such a separation. 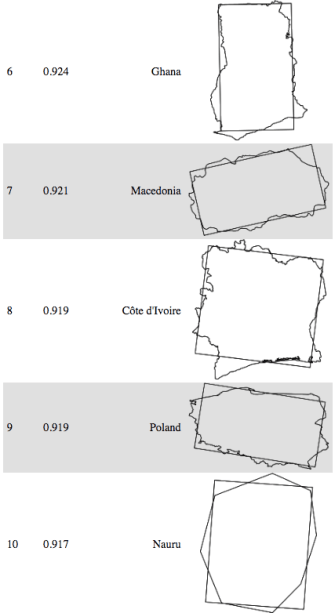 Still rating higher than 0.9 on the rectangularity scale are Ghana and Ivory Coast in Africa, and in Europe Macedonia and Poland—indeed also one of those preternaturally ‘boxy’-looking countries. The tiny Pacific island nation of Nauru, for its part, is another one of those countries that looks rectangular by lack of detail in the database. 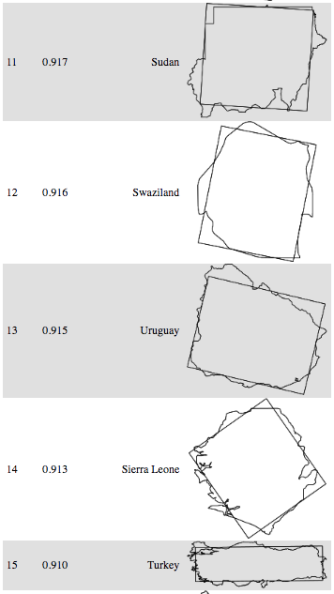 Sudan lost its southern third (3) in an independence referendum in 2011. As the emptiest of  consolations, it gained in rectangularity. It now ranks 11th in the world. Rating 0.916, Eswatini (since 19 April 2018 the new name for Swaziland) loses out by a small margin from its near neighbor Lesotho. Uruguay is the highest Latin American entry.

Both the U.K. and the U.S. are down towards the bottom of the ranking, by the way. The United Kingdom (rating 0.763) is down in 159th place. Largely due to the eccentricity of Alaska (and Hawaii), the United States (rating 0.735) is only the 169th most rectangular country in the world. 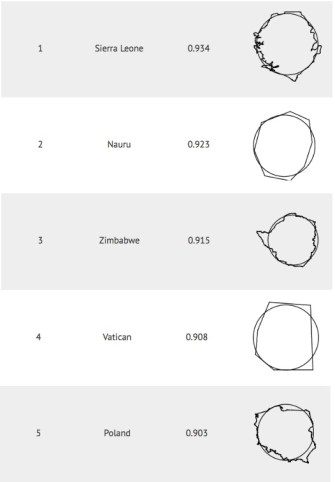 Zimbabwe (0.915) might have finished first, if it weren’t for the Hwange region in Matabeleland, jutting out of the country’s circle of Optimal Rotundity. The Southern African country is also the world’s 30th most rectangular country, by the way. 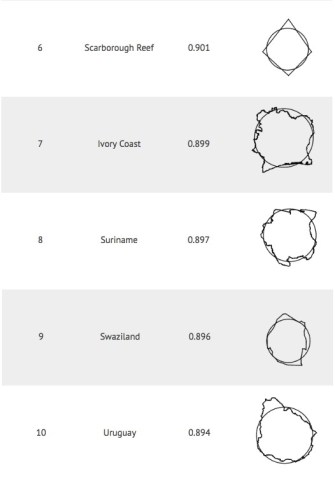 So what does this teach us? Little of any practical value, except this: the fact that the Vatican scores pretty high on both lists has nothing to do with divine intervention. Contrary to common sense, countries can be both very rotund and very rectangular at the same time. 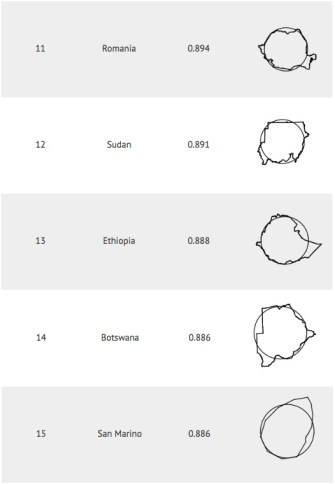 (2) Quite possibly the only officially ungoverned territory on Earth, outside Antarctica. See also #396.

(3) South Sudan—infamous as one of the world’s data holes (see #843). But not for the aforementioned researchers: the world’s youngest nation is the 63rd roundest and 89th most rectangular country in the world.

Related
Sponsored
Want to boost your happiness? Buy experiences, not material possessions
Some experiences even continue to pay dividends time and time again.
High Culture
Did Paul Cézanne hide an early self-portrait underneath a 160-year-old still life?
To answer that question, we may have to figure out when the famed painter started to go bald.
Strange Maps
Dutch government releases a genuine treasure map from WWII, sparking a hunt for the loot
X marks the spot. The Dutch town of Ommeren has been swamped by detectorists armed with shovels looking for $20-million treasure.
Thinking
Creative wisdom from Rick Rubin: embrace your inner gatekeeper
Unlock the full potential of your creativity with “holistic detachment.” This is the way of the editor.
If money doesn’t buy happiness, you’re spending it wrong
These money experts say you can buy happiness. There are some red flags to look out for, though.
▸
7 min
—
with
Lindsay Bryan-Podvin
Up Next
Surprising Science
Scientists discover strange new shape called the ‘scutoid’
Scientists have identified a new shape called the scutoid, and it helps explain the how cells in the body arrange themselves in tightly packed three-dimensional structures to form tissues.