This is probably the most recognisable map of the latter part of the 20th century. It’s certainly the only one guaranteed to provoke outbursts of humming in viewers of a certain age. But where is the Ponderosa exactly? 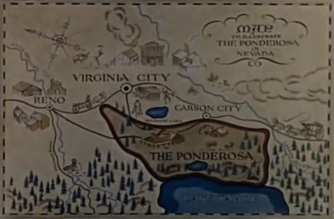 From September 1959 to January 1973, this Map to Illustrate the Ponderosa in Nevada was standard Sunday evening fare on millions of American television screens. The opening visual for Bonanza was paired with the show’s ridiculously catchy theme tune (hence all that pavlovian humming). Ten seconds in, the map dissolved in a ring of fire, revealing the show’s four horsed protagonists – Ben Cartwright and this three sons.

Bonanza was the first prime-time western to air in color. The pilot episode wasn’t well received however, and NBC considered axing the series after 6 episodes, also because colour TV content was 25% more expensive to produce. But Bonanza soon proved true to its name, and became a hit show for the network – America’s highest-rated show for three consecutive seasons (1965-’67). Its popularity helped boost the sale of colour TV sets. Bonanza ran for 14 seasons, totalling 430 episodes, thus becoming the second-longest running TV western (after Gunsmoke‘s 20 seasons). It still runs in syndication today. 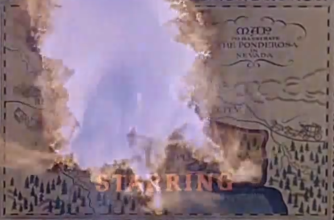 The map dissolving into a shot of the protagonists (via YouTube)

The series was was set in the 1860s, during and after the American Civil War and centred on the Ponderosa, a ranch on the Nevadan shore of Lake Tahoe, a two-hour horse ride from Virginia City. It focused on the dealings of the ranch’s owners, the Cartwright family clan, led by patriarch Ben (played by Lorne Greene) and his three sons, one from each of this three marriages: Adam (Pernell Roberts), Hoss (Dan Blocker) and Little Joe (Michael Landon). Its popularity derived from its focus on family values over gunfights, and its attention to contemporary social issues.

The burning map in the opening credits does more than just provide a geographical framework for the series. In the grand tradition of cartography as narrative device, dating back to Treasure Island (#378) and even Utopia (#51), the map of the Ponderosa adds an air of excitement and adventure. The original map in its full glory, now on permanent display at the Autry Center (image: Autry Center)

The map was designed by Robert Temple Ayres (1913-2012), a cousin of Shirley Temple. The Lansing, Michigan native started out illustrating The Golden Treasury of Bible Stories for the Southern Publishing Association in Nashville, but soon switched to a more secular line of work, as artist and set illustrator for a string of Hollywood studios. At MGM, he helped design the chariots for Ben Hur. He also worked for Paramount, Warner Brothers and Universal, among others. Ayres worked on hundreds of films. He completed his career at Disney Studios; his last project before retirement was providing artwork for restaurants and other venues at Florida’s Epcot Center.

While at Paramount in 1959, the artist was asked to produce a map for Bonanza‘s opening credits. Ayres used the actual geography of northwestern Nevada as the basis for his map of the (fictional) Ponderosa ranch. The map, however, is not oriented to true north, as most maps traditionally are, but rather east-northeast. The artist later explained that this was done “so it would go good on the screen”. 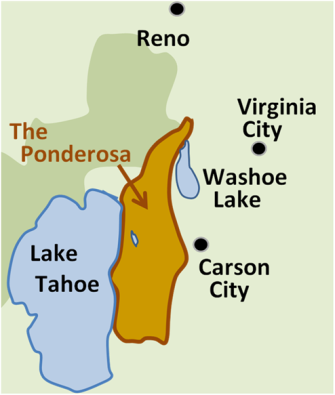 Approximate location of the Ponderosa on a north-oriented map (Image: Brews ohare via Wikimedia Commons)

The Ponderosa ranch is represented by a red-edged area bordering the eastern shore of Lake Tahoe. The ranch almost touches the Reno to Virginia City highway, Washoe Lake, Carson City and the Carson River. The map also shows a stage coach speeding towards Carson City, a miner panning for gold in the Truckee River, and high up in the Sierra Nevada some of the ponderosa pines for which the ranch is named.

For decades, Mr. Ayres’ famous map of the Ponderosa hung in the home of David Dortort, creator and producer of Bonanza. After his death in 2010, his family donated it to the Autry National Center of the American West, at Griffith Park in Los Angeles, where it has been on permanent display since May 2011.

The Autry invited the artist to revisit his work more than 50 years after he made it. His reaction: “Oh, for goodness’ sake! I had no idea where it had gone!” Also, he couldn’t believe how big the original was. Mr. Ayres made the trip to the Autry three times in total, the last time on February 23, 2012, with his grand-nephew visiting from Michigan. He died two days later at his home in Cherry Valley, east of Los Angeles. 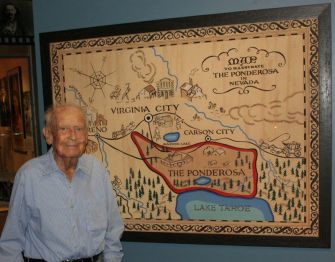 After more than half a century, the artist reunited with his work (Image: LA Times)

Interestingly, Mr. Ayres’ original map differs in small details from the one seen in the opening credits of Bonanza. Obviously, since the original survived, it wasn’t the one burning up. In all likelihood, the show’s production crew made a few (imperfect) copies until they had one that ‘burned right’. 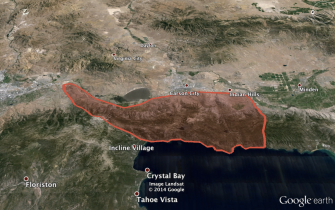 The Ponderosa ranch is one of only a handful of cartographic fictions that managed to become actual, tangible reality – another example being the ‘paper town’ of Agloe (#643). Sensing a business opportunity, a small family ranch near Incline Village, located in the area on the map designated as the Ponderosa, requested and received permission in 1967 to turn itself into the Ponderosa Ranch theme park. The park featured sets from the series: the ranch building and Virginia City. In fact, some episodes of the last 5 seasons and three TV movies were shot at the theme park instead of at the show’s usual backdrop: Stages 16 and 17 at Paramount Studios. The Ponderosa Ranch survived its fictional counterpart by more than three decades, closing only in 2004. 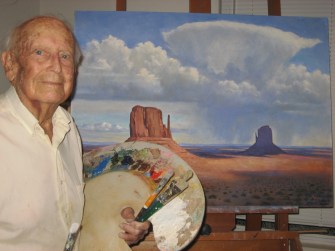 Mr. Ayres was an accomplished painter; prints for some of his works are for sale at his website.

The high pitches from the flute and the harp would reach your ears before the notes from the tuba and the cello.
Up Next
Personal Growth

At the end of the day, the to-do list becomes a record of things you didn’t accomplish: not a great reward for a long day’s slog.