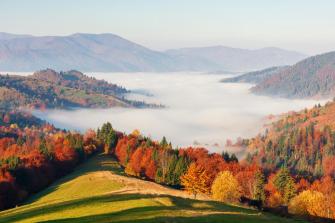 In the northern hemisphere, the longest day is more than two months gone. Since the summer solstice, each day is about two minutes shorter than the previous one — which makes our nights already two hours longer than the year’s shortest night.

And those nights are getting chillier too: autumn is in the air. Or fall, if you prefer. The more formal term for the season has an obscure Latin origin; the more popular name refers to its main feature: the falling of the leaves. Right before the foliage abandons the trees to bare-branched winter, it draws extra attention to itself by exploding into a riot of colors; first on the trees, then on the ground.

That visual fiesta feels like a last hurrah against the waning of the year’s vital forces. Yet those very colors are in fact proof of death (for the leaf, anyway). The leaves turn because the plant has decided to shut down chlorophyll production, after which it ejects the leaves. Their various color changes are sort of like death throes — early stages of decomposition.

Choice words from the prince of comedy 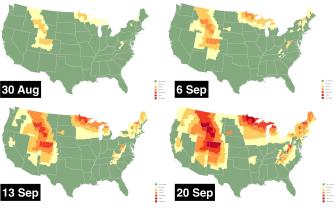 The leaves first start to turn in the Rockies, near the Canadian border, and in Appalachia. The areas expand rapidly.Credit: SmokyMountains.com

Nothing like a Greek playwright to twist that pointy knife with a few choice words. In Birds, Aristophanes links the fate of the falling leaves to our own: “Weak mortals, chained to the earth, creatures of clay as frail as the foliage of the woods, you unfortunate race, whose life is but darkness, as unreal as a shadow, the illusion of a dream (…)”

Pretty grim reading, especially from someone known as “The Prince of Ancient Comedy.” But perhaps Aristophanes had a point. The popular pastime of leaf-peeping is a displacement of our own anxiety about death, further pacified by the certainty of spring ( a.k.a. the hope of resurrection).

Or perhaps foliage tourism is simply all about experiencing and enjoying pretty colors. Either way, the colors change in predictable patterns, both geographically and chromatically.

The steady march of color 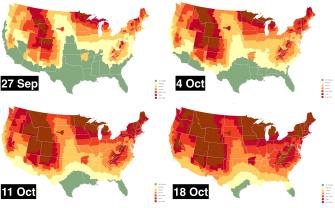 As fall color territory expands, the colors deepen. The South puts up scant resistance. By October 18 this year, only the southern bits of Texas and Florida remain unaffected.Credit: SmokyMountains.com

Directionally, the changing leaves are like a wave that ripples from north to south. Topographically, it hits high altitudes like the Rockies and Appalachians before it does the lowlands. And in terms of scale, it shifts from light to dark: yellow, orange, then red. Light brown, dark brown, done.

Based on those parameters, you can predict with some accuracy which colors will predominate where and when. And that’s exactly what the Fall Foliage Prediction Map does. The map is updated each year by David Angotti and Wes Melton, co-founders of SmokyMountains.com.

In weekly increments from the end of August to the beginning of November, it shows the steady march of color across the North American landscape — north to south, high to low, light to dark.

The map’s scale refers to the typical discoloration process of leaves, but that does not mean the trees in any particular area are monochromatically yellow, red, or brown. Various tree species and even individual trees change color at differing speeds. The scale denotes that mixed picture on the ground. That is why the legend changes from “minimal” and “patchy” over “partial” and “near peak” to “peak” and “past peak.” 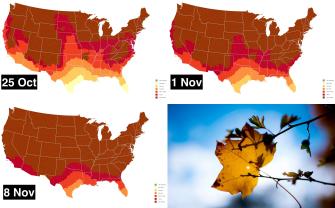 The South has fallen, but the leaves have yet to turn completely, as they already have in most of the North.Credit: SmokyMountains.com; Ina Fassbender/AFP via Getty Images.

Of course, weather may influence the advance of the foliage frontlines this way or that. So do not bank on these predictions, the mapmakers say — or at least, do not sue them when the leaves on the trees at your holiday destination are the wrong shade: “While no tool can be 100% accurate, this tool is meant to help travelers better time their trips to have the best opportunity of catching peak color each year.”

Leaf-peeping is a pastime not limited to the dip in the arboreal life cycle. In the spring, go to Japan for an opposite version. Cherry blossom viewing (or hanami) is such an integral part of Japanese culture that the national weather bureau forecasts the progress of the “cherry blossom front” (or sakurazensen), south to north through the Japanese archipelago. (See Strange Maps #371).

Check out the 2021 Fall Foliage Map on SmokyMountains.com.

Tags
mapstrees
In this article
mapstrees
Related
Strange Maps
Did dark magic conjure up the British Empire?
Esoteric evidence points to a ritual performed by Queen Elizabeth’s court magician John Dee.
Strange Maps
Europe’s oldest map shows tiny Bronze Age kingdom
Discovered in 1900, the Saint-Bélec slab languished unrecognized in a castle basement for over a century.
Strange Maps
Here’s how early school begins – and why it is bad for students
In Louisiana, high school starts at 7:30 am. Research shows that is at least an hour too early.
Strange Maps
Famous map of a woman’s heart tells only half the story
One of the best-known allegorical depictions of love has a rather pessimistic male twin.
Strange Maps
Just four colors are enough for any map. Why?
The four-color theorem was one of the past century’s most popular and enduring mathematical mysteries.
Up Next
Starts With A Bang
How Small Was The Universe At The Start Of The Big Bang?
If it wasn’t a singularity, how small could it have been?Today, when you look out in any direction as far as the laws of physics allow us to see, the limits […]