London used to be famous for its ‘pea-soupers’: combinations of smoke and fog caused by burning coal for power and heating.

All that changed after the Great Smog of 1952, when weather conditions created a particularly dense and persistent layer of pollution. For a number of days, visibility was reduced to as little as one foot, making traffic impossible. The fog even crept indoors, leading to cancellations of theater and film showings. The episode wasn’t just disruptive and disturbing, but also deadly. According to one estimate, it directly and indirectly killed up to 12,000 Londoners. 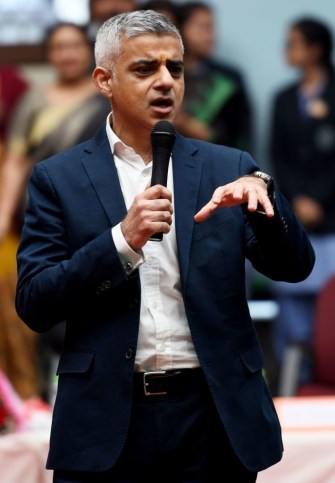 After the shock of the Great Smog, the UK cleaned up its act, legislating to replace open coal fires with less polluting alternatives. London Mayor Sadiq Khan is hoping for a repeat of the movement that eradicated London’s smog epidemic, but now for its invisible variety.

The air in London is “filthy, toxic,” says Khan. In fact, poor air quality in the British capital is a “public health crisis”. The city’s poor air quality is linked not just to thousands of premature deaths each year, but also to a range of illnesses including asthma, heart disease and dementia. Children growing up in areas with high levels of air pollution may develop stunted lungs with up to 10% less capacity than normal. 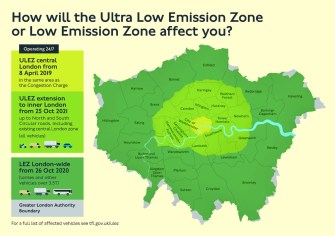 Khan has led a very active campaign for better air quality since his election as London Mayor in 2016. Some of the measures recently decided: 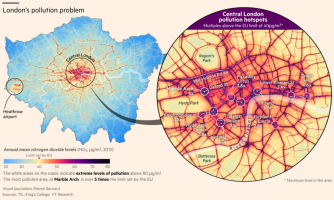 Heathrow (bottom left on the overview map) is another pollution hotspot

What worries experts is that despite considerable efforts already made, levels of air pollution stubbornly refuse to recede – and remain alarmingly high in locations where traffic flows converge.

It’s not something you’d think of, given our atmosphere’s fluctuating nature, but air pollution hotspots can be extremely local – as the above map demonstrates.

One important lesson for all Londoners: Don’t inhale at Marble Arch! Levels of nitrogen dioxide (NO2) are five times the EU norm – the highest in the city. Traffic permitting, quickly cross Cumberland Gate to Speakers’ Corner and further into Hyde Park, where levels sink back to a ‘permissible’ 40 milligrams per cubic meter. Now you can inhale!

Almost as bad: Tower Hill (4.6 times the EU norm) and Marylebone Road (4 times; go to nearby Regent’s Park for relief).

Elephant & Castle is the only pollution hotspot below the Thames and, perhaps because it’s relatively isolated from other black spots, also the one with the lowest multiplication factor (2.8 times the maximum level).

On the larger map, the whole of Central London, including its relatively NO2-free parks, still shows up as more polluted than the outlying areas. Two exceptions flare up red: busy traffic arteries; and Heathrow Airport (in the bottom left corner). 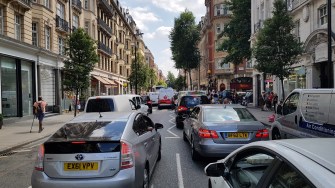 Cycling has really taken off in London. But despite all pro-cycling measures, a wide range of other transport options and car-dissuading measures, central London is still a very congested place. Average traffic speeds on weekdays has declined to 8 miles (13 km) per hour – fittingly medieval speeds, as the road network was largely designed in medieval times.

The large share of diesel vehicles on London’s streets only increases the problem. Diesel vehicles emit lower levels of carbon dioxide (CO2) than petrol cars, which is why their introduction was promoted by European governments.

However, diesels emit higher levels of the highly toxic nitrogen dioxide (NO2) than initial lab tests indicated. Which is why they’re being phased out now. 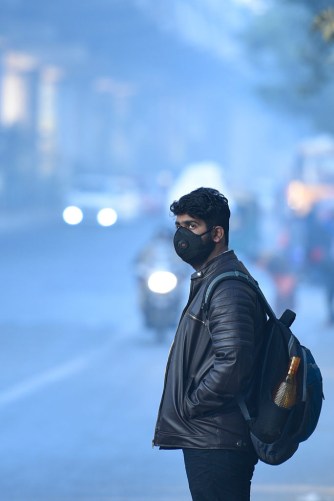 By some measures, London’s air quality is almost as bad as New Delhi’s.

As bad as Delhi, worse than New York

By some measures, especially NO2, London’s air pollution is nearly as bad as big Asian cities such as Beijing or New Delhi, and much worse than other developed cities such as New York and Madrid.

The UK is bound to meet pollution limits as set down in the National Air Quality objectives and by EU directives, for example for particulate matter and nitrogen dioxide. 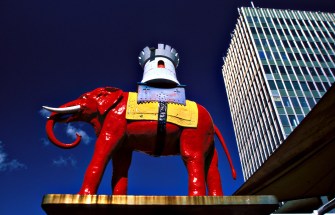 Studies predict London’s air pollution will remain above legal limits until 2025. Sadiq Khan – himself an asthma sufferer – is working to make London’s air cleaner by measures great and small. Earlier this week, he announced that two of Google’s Street View cars will be carrying air quality sensors when mapping the streets of London

Over the course of a year, the two cars will take air quality readings every 30 metres in order to identify areas of London with dangerous levels of air pollution that might be missed by the network of fixed sensors. An additional 100 of those fixed sensors will be installed near sensitive locations and known pollution hotspots, doubling the network’s density.

It’s all part of Breathe London, a scheme to map the British capital’s air pollution in real time. Breathe London will be the world’s largest air quality monitoring network, said Mr Khan, launching the scheme at Charlotte Sharman Primary School in the London borough of Southwark.

Up to 30% of the school’s pupils are said to be asthma sufferers. Charlotte Sharman is close to Elephant & Castle, as the above map shows, one of Central London’s air pollution hotspots.

Far from acting as the conduits of a benevolent deity, these religious leaders threw the teachings of their own church out of the window.
Up Next
Neuropsych

To remember something, draw it

It works better than other memorization techniques.