An alarming new study found evidence that childhood exposure to significant traffic-related air pollution, or TRAP, is linked with structural changes in the brain. The longitudinal study conducted by the Cincinnati Children’s Hospital Medical Center (CCHMC) discovered that children who were exposed to higher levels of TRAP during their first year of life had reductions in their gray matter volume and cortical thickness at age 12 when compared to peers with lower levels of exposure. Traffic-related air pollution is a toxic cocktail of gaseous pollutants that come from the emissions of motor vehicles as a result of fossil fuel combustion. These latest findings support evidence that TRAP, which can directly access the brain through nasal inhalation, contributes to neurological developmental disorders and diseases.

How the study was done

The participants in the study were a subset of children enrolled in the Cincinnati Childhood Allergy and Air Pollution Study. Researchers wanted to see if early life exposure to traffic-related air pollution was associated with changes in brain volume and cortical thickness. To do this, they used magnetic resonance imaging (MRI) to get anatomical brain images from a group of 147 12-year-old volunteers characterized by either high or low levels of TRAP exposure during their first year of life. That exposure was estimated using an “air sampling network” of 27 sites around Cincinnati. The average TRAP exposure for the high exposure group was about twice as high as the low exposure group. Using the anatomical brain images, researchers measured cortical thickness and differences in regional brain volume among the group of child-participants. 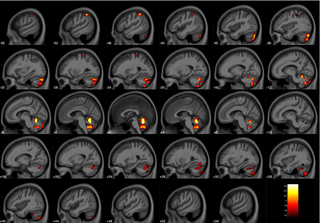 The results of the study suggest that where a child lives and the air quality in that location can affect how his or her brain develops.

“Our study found that children with higher levels of exposure to TRAP demonstrated regional reductions of cortical thickness and gray matter volume relative to children with lower levels,” write the authors of the study.

Gray matter includes areas of the brain that are involved in sensory perception (seeing, hearing, smelling, etc.) and motor control. Cortical thickness reflects the depth of outer gray matter. Among the children exposed to higher levels of TRAP, researchers found smaller regional gray matter volumes in certain areas of the brain including the cerebellum. This brain region grows rapidly in the first two years of life and is involved in the regulation of motor function, cognition, and emotion. “Cerebellar abnormalities are consistently associated with numerous mental health disorders including anxiety, ADHD, ASD, and schizophrenia,” the authors note.

Decreased cerebellar volumes have also been linked to levels of depression and anxiety, and the researchers found evidence that each .25 mg per cubic meter increase in early life TRAP was associated with increases in depression and anxiety scores for the children. Similar evidence has associated air pollution with higher levels of anxiety and depression in adults. The study, however, is limited in that the findings hinge upon a single MRI examination showing a single moment in time of ongoing brain development.

“While the results are concerning, there still needs to be more research conducted to confirm and replicate the results, and to expand the analysis to include those whose [TRAP] exposure level falls in the middle as our study design only examined the high and low exposed participants,” writes Dr. Kim Cecil, a researcher at CCHMC and lead author of the study, in an email to Big Think. “It is also important to note that elevated exposure doesn’t necessarily mean children will experience any adverse effects.”

She notes that at this point in the research, the study participants have been found to have normal IQ distributions.

How to know what the air quality is in your area

In 2018, one-third of Americans were living in an area that experienced poor air quality due to pollution. To find out what the air quality is in your area, you can go to the World’s Air Pollution: Real-Time Air Quality Index. If you want to monitor the air quality in your own home, investing in an air quality monitor might be worth it, but what can you do if the numbers are showing a concerning level of air pollution?

“Though it can be difficult to avoid air pollution itself, doing things like exercising (in lesser exposed environments such as parks and other green spaces) and eating foods high in antioxidants may help mitigate the effects,” writes Cecil. ” We think inflammation is the primary mechanism behind our results, so things you can control like diet and exercise can be beneficial.”

There’s also a growing need to address the root of the problem. The fossil fuel industry, and government support of it, facilitate American reliance on fossil fuels that causes traffic-related air pollution. National, state, and local policy makers have a large role to play in protecting public health by strengthening air quality protections. Rather than subsidizing fossil fuels, elected officials can propose or support legislation that reduces our reliance on pollutants that diminish our air quality and put children’s health at risk.

Quantum mechanics + consciousness: There is nothing better than mixing two great mysteries to produce an even bigger one.
Neuropsych

The internet has made it easier than ever to keep in touch with our exes. For people in relationships, that can cause problems.
Health

The cause of Alzheimer’s is still not fully understood, but we might be able to vaccinate against it anyway.
Up Next
Strange Maps

Why Trump’s Palestine map is important

Trump’s Middle East peace plan contains the first map of a Palestinian state that ‘Israel can live with’.