It Works for the Turks: A Colour for Each Direction

Turkish cardinal directions? I didn't even know they had cardinals in Turkey! 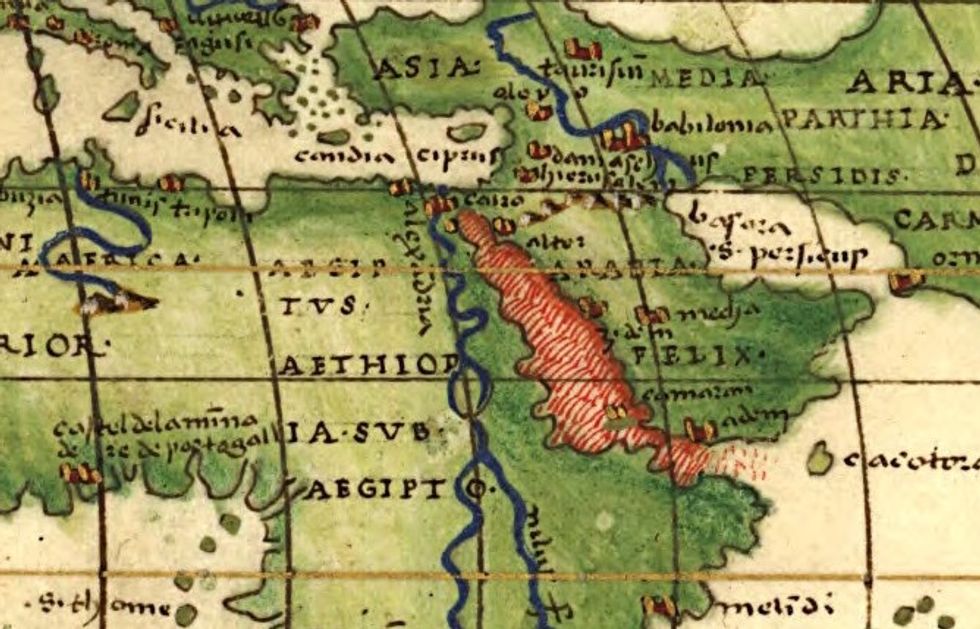 What colour is the sea? Why, blue of course (1). Unless you're Homer. In which case your numerous references to the Aegean as the "wine-dark sea" will puzzle scholars for centuries to come (2).

There are other curious exceptions. If you're Turkish, the question What colour is the Mediterranean? is its own answer. The Turks call that body of water Akdeniz, which literally means: the White Sea.

Some maps, like this late-19th-century serio-comic map of Europe, take the Black Sea's name literally.

But then of course English also has its coloured seas – four, to be precise, although none of the toponyms is native to the English language. One also is a White Sea, though not quite blessed with the same balmy climate as its Turkish namesake. A direct translation from the original Russian (3), the white in this sea's name refers to the ice floes that block shipping to and from Arkhangelsk, the region's major port, for at least half the year.

The Yellow Sea is another direct translation. Called Huánghǎi (黄海) in Chinese, the sea gets its name from the sand particles that travel down the Yellow River, or Huánghé (黄河), from the Gobi Desert, and can turn the sea's surface golden yellow.

Another popular literalist representation, this time of the Red Sea.

The Black Sea is rich in iron sulfide, allowing very little else but sulfur bacteria to thrive. Hence the darkness of the sea's sediment, and of its waters when stirred. The oldest recorded name for the sea, dating from around 500 BC, already refers to its colour: the Achaemenids called it Axšaina, (Persian for 'black').

A proposed alternative flag for Turkey, composed of the colours associated by Turkish with the cardinal directions.

Greek popular etymology transformed the Persian word into axeinos ('inhospitable') when Greek settlers first arrived on the sea's shores, and into euxinos ('hospitable') when they became more numerous in and familiar with the region.

The last coloured body of water is the Red Sea, separating Africa from Arabia. The Greeks already called it Red Sea, or Erythra Thalassa (Ερυθρὰ Θάλασσα) (4). One theory is that the red of the name refers to the seasonal blooming near the water's surface of a red-coloured cyanobacterium called Trichodesmium erytrhaeum – sometimes also known as sea sawdust.

The traditional Chinese colour/direction scheme seems to match the Turkish one.

But there is another theory. Certain Asiatic languages use colours to refer to cardinal directions. In his Histories, Herodotus on one occasion refers to the “Erythrean or southern” sea, using the terms interchangeably. Could it be that the Red Sea owes its name to something else than bacteria - and perhaps the Black Sea too?

Let's go back to the curious Turkish name for the Mediterranean. Turkish is one of several languages and cultures to associate the cardinal directions with colours. White, you guessed it, is linked to west, as the Mediterranean lies to the west of Asia Minor, homeland of the Turks. Two other names also fall into place: north is black, south is red. And indeed: the Black Sea – Karadeniz – is to the north of Turkey, the Red Sea – Kizildeniz – to the South.

Sea the sights: a Turkish colour scheme for the Middle East.

What about east? In Turkish, that direction is associated with blue. But there is no Gökdeniz ('Blue Sea') to the east of Turkey. The likeliest candidate is the Caspian Sea, landlocked between Russia in the north and Iran in the south, flanked by the Caucasus region in the west and the 'stans in the east. But it is called Hazar denizi in modern Turkish. Literally translated, the 'Khazar Sea', after the disappeared Turkic tribe that famously converted to Judaism around the 9th century.

However, on Emanuel Bowen's 1747 Map of Iran, a northern inlet of the Caspian Sea is labelled the Blue Sea. The area has been known afterward as Tsesarevich Bay and, in communist times, as Komsomolets Bay. It is currently called Dead Kultuk. Could its former name be a residue of an older Turkish toponym, one that covered the entire sea? Then again, other sources seem to suggest that the Aral Sea may have been the Turks' orlginal Gökdeniz.

At the crosshairs of the four coloured seas: the original Turkey?

The question of coloured cardinal directions is not just of interest from a historical or linguistic point of view. Linking Turkish culture to ancient toponyms provides a proximate location for Turkish ancestral lands. In a region riddled with ancient grudges about territorial loss and conquest, such archaeo-linguistic evidence of residential antiquity is highly valuable.

Many thanks to Luis Alipio for sending me the colour maps of the Black and Red Seas.

The 'serio-comic map' is Das Heutige Europa, published in 1887 by Caesar Schmidt in Zürich for the satirical magazine Nebelspalter ('Fog-cleaver'). Image found here on russianuniverse.org. The Red Sea map is an excerpt from Battista Agnese's 1544 world map, found here on Wikipedia. Alternate Turkish flag found here on the Steampoweredwolf page at Deviantart. Chinese cardinal direction scheme found here on Xue-Hanyu.com. Map of the Caspian Sea by E. Bowen (1747), found here on Wikipedia. Images of the four seas and of the putative Turkish ancestral homeland taken here from the blog Tareh ve Arkeoloji ('History and Archeology').

(1) From Blackadder, recall Baldrick's pathetic attempt at lexicography by defining the letter C as: "Big blue wobbly thing that mermaids live in".

(2) It has been suggested that Homer was colour-blind, that ancient Greek lacked a word for 'blue', that marine algae gave the Aegean that particular hue, that it referred to dust-induced red sunsets, and even that Greek wine in antiquity was... blue! Indeed, in a 1983 letter to the science journal Nature, two Canadian scientists proposed that the water used by the Greeks to dilute their wine contained alkalines of such quality and in such quantity that it turned the originally red-coloured drink blue. Likeliest still is the standard explanation: that of poetic licence.

(3) Byeloye More (Белое море). Curiously, the related Slavic languages of Serbian and Bulgarian use their equivalent to describe... the Aegean.

(4) Also the origin of the name of the modern state of Eritrea, thus, literally: "Redland".