England is the home of football, and baseball is a quintessentially American sport. But no nation can claim chess as its own. It is a truly global game. Yet as this map shows, it too has a history, and a geography.

The origins of chess can be traced all the way back to 6th-century India. From there it spread around the world, mutating along the way. But its journey was considerably slower than the viral memes of our connected age, which shoot across the globe in mere minutes. It took chaturanga a thousand years to reach Iceland as skak.

This map, taken from the endpapers of A Short History of Chess (1949) by Henry Alexander Davidson, shows the routes both to the east and west travelled by the game, the approximate dates when it reached various parts of the world, and the local names for the game.

The game is first attested as chaturanga in India, around 600 AD. Chaturanga is Sanskrit for “four-limbed”, a reference to the four divisions of the Indian army (as also mentioned in the epic Mahabharata): infantry, cavalry, elephantry and chariotry. Pieces denoting those four divisions are the respective precursors of the pawns, knights, bishops and rooks of the modern game.

Chaturanga had two features still in evidence in modern chess: pieces having different powers, and victory being dependent on one piece (i.e. the king in the modern game). It did not appear out of nowhere; there is archaeological evidence of similar board games from the Indus Valley Civilisation (2600–1500 BCE).

The game’s first excursion outside India is to Persia (700 AD, chatrang), where it became part of the courtly education. Persian players exclaimed “shāh māt!” (“the king is helpless”) when they had cornered their opponent’s main piece – the origin of the term ‘checkmate’.

The Arab scholar al-Masudi reports that chess was introduced into Persia under the reign of Sassanid emperor Chosroës I, also known as Nushirwan (r. 531 to 579), more than a century earlier than mentioned on this map. 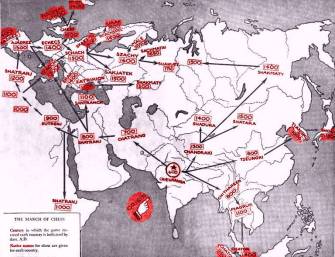 After the Muslim conquest of Persia, the game – and the Persian exclamation of victory – travels to Arabia (800 AD, shatranj), and eventually further west, with the expanding Islamic empire to Egypt (900 AD, sutrenj).

The earliest recorded game of chess dates to 10th-century Baghdad, and is between a historian Abu-Bakr Muhammed Ben Yahya as-Suli and his pupil Abu’l- Faraj bin al-Muzaffar bin Sa’-id al-Lajlaj.

From the crossroads of Africa, Europe and Asia, the march of chess branches off to the south, towards Ethiopia (1000 AD, shatranj); to the west, through North Africa to the Maghreb (1200 AD, shatranj); and to the north, through Asia Minor (1100 AD, santranch) to Constantinople (1200 AD, zatrikion). Muslim invaders also imported the name, and the game to Spain (1300 AD, ajedrez) and Portugal (1400 AD, xadrez).

In India, the chess pieces had been ornate and lifelike. The Islamic interdiction on depicting living creatures – a rule meant to prevent idolatry, and enforced most strictly against depictions of the prophet Muhammad – led to the chess pieces becoming more abstract and nonrepresentational.

In Christian Europe, human and animal shapes reappeared, reinterpreted by and for the age: the split top of the piece now known as the bishop could refer to a bishop’s mitre – or a fool’s cap.

This became a factor in the popularisation of the game those areas of Europe not in direct contact with the Islamic world. Here, incidentally, the game was usually renamed after the Persian name of the main piece, the king (“shah”). Hence scacchi in Italian, échecs in French, Schach in German, chess in English, etc.

Known also as the King’s Game, chess was part of high culture in medieval and renaissance Europe. One of the first books printed in English was William Caxton’s The Game and Playe of the Chesse (1474).

By late 15th century, chess had evolved in Europe into the game that we know today. For example, between 1475 and 1500, the queen’s moves were expanded from two moves in any direction to as many as possible. This innovation, thought to originate in one of the Romance countries (Italy, Spain, Portugal or France), was originally called scacchi alla rabiosa (“madwoman’s chess”), and sped up the game, which previously often lasted for several days. Those rule changes found their way back into the Islamic world, keeping the rules of the game fairly homogenous.

Extremely popular with all layers of society, chess also had its detractors. In The Courtier (1528), Baldassare Castiglione wrote:

I think chess has a fault, which is that a man may be too cunning at it. For to be excellent in the play of chess, one must spend so much time on it, and study so much, that one may as soon learn some noble science, or encompass any other matter of importance. And yet after all that labour, one knows no more but a game. Therefore I believe here happens a very rare thing, namely that being average at chess is more commendable than being excellent.

By 1650 AD, chess had reached Finland (male) and northern Russia (sachmatai), and half a century later it had penetrated into western Siberia (shamaty).

But – at least according to this map – the game had already reached the vastness of Russia via two other routes: via the Byzantine empire into southern Russia (as shakmaty, around 1300 AD), and into the Russian Far East (as shakmaty) by 1400 AD, pushing into the Ural region by 1500 AD, via one of the eastern branches coming of chess coming out of India.

The eastern versions of chess are quite distinct from the western ones, often merging with or deriving elements from local board games such as go – under the influence of which Chinese chess is played on the intersection of lines instead of squares, for example.

Shogi, the Japanese variety of chess, uses a board of nine by nine squares, has a second queen for the king, and allows opponents to reuse captured pieces as part of their own forces.

The game even crossed over to Alaska, where chessmen made by the local Yakutat people have been documented – no doubt used in a game that is a distant cousin of the one developed from the Indian original in Persian palaces, Arabian serails and European courts.

On the other side of America, Benjamin Franklin answered Castiglione by singing the praises of that western version of the game, in his article The Morals of Chess (1750):

The Game of Chess is not merely an idle amusement; several very valuable qualities of the mind, useful in the course of human life, are to be acquired and strengthened by it, so as to become habits ready on all occasions; for life is a kind of Chess, in which we have often points to gain, and competitors or adversaries to contend with, and in which there is a vast variety of good and ill events, that are, in some degree, the effect of prudence, or the want of it. By playing at Chess then, we may learn Foresight […], Circumspection [… and] Caution.

As this map shows, the ‘global’ game of chess actually is the result of a very particular journey, and still bears the fingerprints of all the cultures that passed the pastime on to each other.

The rules of chess these days are no longer set by consensus, but by the World Chess Federation (FIDE). Although the rules have not changed substantially in recent times, they are still being adapted to current circumstances. According to FIDE rules, a player whose mobile phone makes a noise during a game – even if to indictate low battery – loses the game by forfeiture.

The real risks of psychedelics, explained by a Johns Hopkins expert.
▸
5 min
—
with
Matthew W. Johnson
Up Next
Starts With A Bang

Is there really a cosmological constant? Or is dark energy changing with time?

Constant? Not-a-constant? Or is there a fundamental flaw in the way we’re doing business?This article was written by Sabine Hossenfelder. Sabine is a theoretical physicist specialized in quantum gravity and […]