He’s been maligned for birtherism, racism, sexism, and half a dozen other isms. A growing number of Republicans no longer support his candidacy. The opinion polls show a widening gap in favour of his main opponent. But Donald J. Trump would still easily win the presidency. If only it were truly a man’s world.

If only men could or would vote, Trump would win by a landslide. The real-estate mogul would come out on top in 35 states, garnering 350 votes in the electoral college. Hillary Clinton would win only 188 electoral votes, and only 14 states. Most of the country would turn red, the exceptions being Hawaii, Washington, Oregon and California in the west; a huddle of northeastern states – Maryland, Delaware, New Jersey, New York, Connecticut, Rhode Island, Vermont and Massachusetts; and in between only New Mexico and Illinois. Maine’s electoral votes would be split between both candidates. 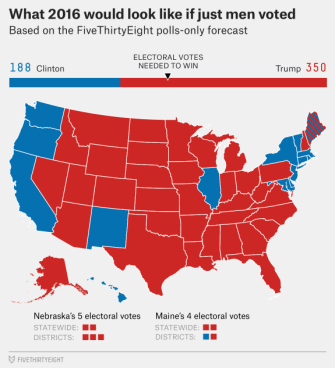 But what if women ruled the world, or at least what if only their votes counted? It’s an even bigger landslide – in the other direction. Hillary would get 458 votes on the electoral college, Donald only 80. That would give him only 12 states: a western clump consisting of Idaho, Wyoming, Utah and North Dakota; and a southern string, from Oklahoma, Arkansas and Louisiana through Mississippi, Alabama and Tennessee to Kentucky and West Virginia. In this scenario, the Republican and Democratic candidates would have to share Nebraska’s electoral votes. 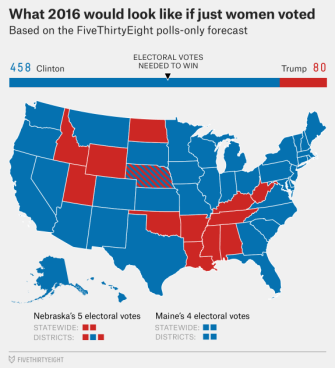 These maps are from FiveThirtyEight, where Nate Silver expands on the “massive gender split” that caught his eye in a recent poll: “Clinton trail(s) Trump by 11 percentage points among men but lead(s) him by 33 points among women. To put those numbers in perspective, that’s saying Trump would defeat Clinton among men by a margin similar to Dwight D. Eisenhower’s landslide victory over Adlai Stevenson in 1952, while Clinton would defeat Trump among women by a margin similar to … actually, there’s no good comparison, since no candidate has won a presidential election by more than 26 percentage points since the popular vote became a widespread means of voting in 1824”.

Granted, the gender split isn’t as pronounced in all polls, but the average still adds up to a Clinton lead of 15% among women, and a Trump lead of 5% among men, Silver says. Factoring in those differences to the current, gender-neutral polling averages for each state pushes them into the Trump or Clinton columns on these maps. Leaving the dual monarchy of gender-separated electorates behind for the less divisible republic in which the November 8 election will take place, Silver concludes: “If Trump loses the election, it will be because women voted against him”.

Related
Hard Science
Some earthquakes last for seconds, others for minutes — and a few for decades
What do you call it when the Earth shakes for three decades?
Sponsored
What childhood “money story” is shaping your financial behaviors?
Here are the signs that you inherited “money anxiety” from your parents.
The Present
The “maritime Indiana Jones” who salvages shipwrecks now wants to tow icebergs
Simple physics makes hauling vast ice chunks thousands of miles fiendishly difficult — but not impossible.
Neuropsych
Inside the brains of aging dogs
In a citizen science project, thousands of pet dogs are helping scientists to understand what happens to memory and cognition in old age.
Neuropsych
The most common source of awe might surprise you
It’s us.
Up Next
Starts With A Bang
The science of how a hurricane works
We might have been spared the worst of Hurricane Matthew, but the underlying science is informative at any time!“She didn’t even know what she’d do when she got back to New […]