How the U.S. teaches foreign languages to its diplomats. 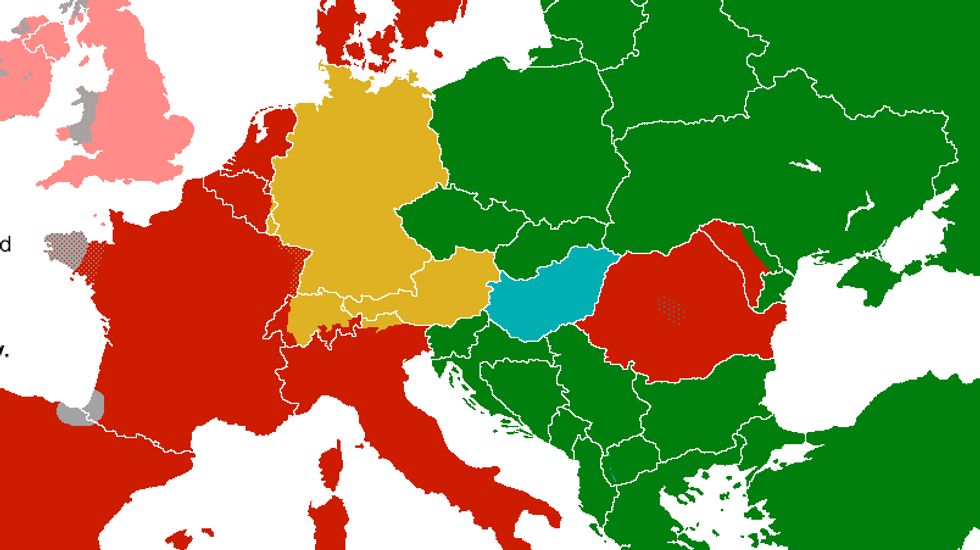 For English-speakers, Romanian is easier to learn than German. And you’ll be speaking Russian sooner than Hungarian.

How is that? Because the Foreign Service Institute says so. Located in Arlington, Virginia, the FSI is the U.S. government’s main provider of foreign affairs training, including language courses.

As the chief learning organisation for the State Department, the FSI is where diplomats go to study the languages they will need on foreign postings. The Institute has a very practical approach to languages, dividing them into five categories, depending solely on how long it takes to learn them.

This map shows how the FSI judges the difficulty of European languages. Note that the Institute only teaches languages that are required for diplomatic intercourse; hence the grey spots on the map.

You won’t find any courses in Basque (the area straddling the Franco-Spanish border), Breton (in the ‘nose’ of France), Welsh (in, ehm, Wales) or Scots or Irish Gaelic in Arlington. In the countries where those minority languages are spoken, you’ll get by with Spanish, French and English.

English, by the way, is a ‘Category 0’ language (pink on the map), meaning that Americans are expected to be proficient in it. English is of course an official language in Ireland and the UK, but also in Malta (although it is coloured grey on the map, since it also has its native Maltese language, which is based on Sicilian Arabic and is the only Semitic language to have official status in the European Union).

‘Category I’ languages (in red on the map) are the easiest for English speakers, who should be able to reach reading an speaking proficiency within approximately 24 weeks (i.e. a little less than half a year of intense study).

These languages include both Germanic ones (Dutch, Danish, Norwegian and Swedish) and Romance ones (French, Spanish, Portuguese, Italian, Romanian). That may seem strange, since English is more closely related to the former than the latter.

However, the peculiar history of English means that it is heavily influenced by French (and Latin), especially in vocabulary. One study says that the share of Latin and French words in English is greater than that of Germanic origin (29% each, versus 26%).

German, on the other hand, might share a lot of basic vocab with English (1), but according to the FSI it is a ‘Category II’ language (orange) – meaning that it would require around 30 weeks of intense study to master written and spoken proficiency.

That doesn’t quite chime with the experience of Mark Twain, who wrote that

“(m)y philological studies have satisfied me that a gifted person ought to learn English (barring spelling and pronouncing) in thirty hours, French in thirty days, and German in thirty years. It seems manifest, then, that the latter tongue ought to be trimmed down and repaired. If it is to remain as it is, it ought to be gently and reverently set aside among the dead languages, for only the dead have time to learn it” (2).

So why is German rated a grade more difficult than, Dutch, which is a directly related language, or even than Romanian, which is from another language family altogether?

Because, despite the large extent to which the vocabulary of German is cognate with that of English, the grammar of German is way more complex than that of Dutch or Romanian among others – or English itself, for that matter.

For example, German nouns are gendered, meaning they are either male, female or neutral. This is not always logical. Yes, der Mann is male and die Frau is female, but das Mädchen (the girl) is neutral. And like Latin, German has different cases – ‘of the man’: des Mannes (genitive), ‘to the woman’: zu der Frau (dative), and so on. And don’t get us started on verb conjugations, word order and detachable prefixes!

The latter four are mutually (3) completely unintelligible, as are the Baltic and Slavic families with all the others, but they share a level of difficulty. According to the FSI, it will take you about 10 months (i.e. 44 weeks) of full-time study to get the hang of any of these.

But wait, it gets worse. If you’re an American diplomat about to be stationed in Hungary, Finland or Estonia, you’re going to have to deal with the asterisk behind either of those ‘Category IV*’ languages. It means they’re not quite ‘Category V’, but still a lot harder than, say, Icelandic or Greek. So you’re looking at about a year of full-time study to make yourself understood in either Finnish, Estonian or Hungarian.

There are no 'Category V' languages in Europe, but the blue bits on the map hint at where – and what – they might be: Arabic, spoken, among other places, in Morocco, Algeria and Tunisia, on the southern edge of this map. Getting a good grasp of Arabic would require at least 88 weeks of day in, day out studying.

So why is Arabic harder than for example Turkish? Both languages are equally unrelated to English. While that may be so, Turkish has an easy orthography (in Latin script, unlike Arabic), an uncomplicated case system and extremely regular verb declensions – all factors which distinguish it from Arabic.

There are no ‘Category III’ languages in Europe, but of course the FSI system does not stop at Europe’s borders.

Considering all that effort, why would an English-speaker –even a diplomat – learn another language? Doesn’t everybody else speak English anyway?

True, English will get you pretty far in the world, but not everywhere. Speaking the local language – or at least making a decent effort to do so – will earn you good will and open doors that otherwise may stay closed.

Another reason is that being English-only speakers may be a disadvantage even if everybody else speaks English. According to a recent BBC article, native English speakers are the world's worst communicators. Being monolingual means they are less proficient in detecting the subtleties of language variation than non-native speakers of English.

Those non-native speakers will be less proficient in slang, word-play and cultural-specific references, and will avoid them more than monolingual Anglophones. In fact, they are better at using English as a lingua franca than native English speakers.

Also, learning another language exercises the brain, and provides insight into another culture. As the saying goes: “As many languages you speak, so many times are you human”.

In the original Latin, that’s: “Quot linguas calles, tot homines vales”. The quote is by Emperor Charles V (1500-1558), who also said: “I speak in Latin to God, Italian to women, French to men, and German to my horse”.

Neigh twice for the accusative, Misty!

(2) In Appendix D to ‘A Tramp Abroad’. Twain’s attitude towards German can be described as abhorrent admiration, as witnessed by these two further quotes:

"Whenever the literary German dives into a sentence, that is the last you are going to see of him till he emerges on the other side of his Atlantic with his verb in his mouth”;

“Some German words are so long that they have a perspective. Observe these examples: Freundschaftsbezeigungen; Dilettantenaufdringlichkeiten; Stadtverordnetenversammlungen”.

(3) Thanks for pointing out that indispensible adjective, Andy!