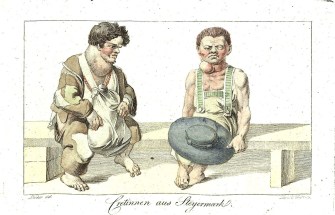 How do you make Captain Haddock swear like the drunken sailor he is, without R-rating the comic that stars his much milder-mannered friend Tintin?

Eventually Hergé, Tintin’s spiritual father, found the answer. Whenever Haddock verbally exploded, his stream of invective was colorful rather than off-color. The captain merely shouted scientific and esoteric terms at the victims of his frequent displeasure.

So when Haddock let out “crétin des Alpes” (‘Alpine cretin’) in the original French-language version of The Seven Crystal Balls (serialised from 1943), the expression was sufficiently obscure to be inoffensive, its topographic specificity only adding to the humorous effect (1).

Yet the word ‘cretin’ has a very real, very shocking and at that time still very recent history, and indeed a link to the Alps. When Haddock used the term, the age-old blight of cretinism had been erased only a few decades earlier. But the relative isolation of the sufferers, and the pitiful nature of their suffering, had already wiped the disease from public memory. 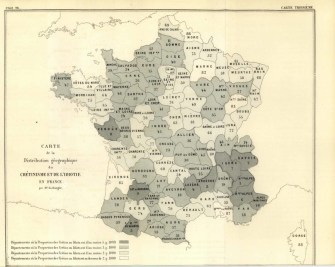 From the 18th century onwards, travellers exploring the then remote Alps for their natural beauty were often horrified by the region’s human geography. Among the inhabitants of some secluded valleys, they found many who suffered from physical deformities and mental retardation.

In the Guide du Voyageur en Suisse (1788), Thomas Martyn observed: “These imbeciles, known as ‘cretins’, are plentiful (in the Valais region of Switzerland). Their body resembles that of a dwarf, they appear misshapen and sombre, their minds are devoid of all activity. Their smile only indicates that the cretin is merely a living animal.”

The most prominent physical symptom was a so-called ‘goiter’ (2) – a greatly enlarged thyroid gland, bulging forward from the neck. Other physical symptoms included dwarfism (with adult sufferers as short as 1 meter (3 ft 3 in), loss of hair, thick skin, enlarged tongue and/or belly, and muscle impairment sometimes severe enough to prevent walking or even standing.

Additionally, cretinism could manifest as cognitive impairment, from slight to severe mental retardation. Some sufferers were so afflicted they couldn’t speak or take basic care of themselves. 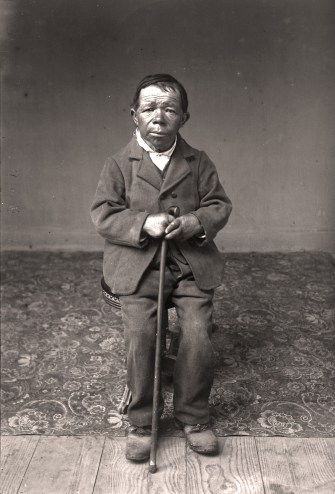 Although not yet by that name, ‘cretinism’ was known to the ancients and was described by Roman writers. However, because its most severe manifestations were limited to isolated mountainous regions, it was long underreported – and misdiagnosed. Early medical hypotheses blamed stagnant valley air, bad water, ‘geological toxicity,’ or inbreeding for the congenital disorder.

The actual cause of cretinism is iodine deficiency, which is why the current preferred term is ‘congenital iodine deficiency syndrome’ or CIDS. Iodine is a mineral that is needed for the production of thyroid hormones, without which the human body’s metabolism can’t properly function.

Iodine is most abundantly present in the oceans and is transported to land by rain. However, it is not uniformly present in soil. It is most notably absent from mountainous and other inland regions, especially those subject to frequent flooding.

Plants grown in these regions will also be iodine-deficient, and will locals eating only locally-sourced foods. The soil in some Alpine regions is severely iodine deficient. In combination with dietary monoculture, this explains the abundance of cretinism in the region. 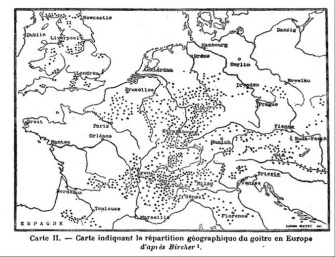 Geographic distribution of goiters throughout Europe in 1883: not just in the Alps or Pyrenees, but also notably throughout western Germany, northern Italy, Austria and Britain.

From the 18th century, ‘cretinism’ became the common term for the disease in French medical texts. The word’s origin is uncertain but may derive from the French ‘chrétien’ (‘Christian’), a common greeting in the French Alps – or perhaps a term used as a reminder of the basic humanity of the sufferers. Other possible etymologies:

Around 1850, the French state identified around 20,000 of its citizens as ‘cretins’ and around 100,000 as sufferers from the goiter, in 24 of its around 90 departments – especially in its mountainous regions, in both the Alps and Pyrenees.

In the 19th century, so-called ‘goiter belts’ were identified in Europe and North America: regions where the most visible symptom of cretinism was relatively common – even if the severity of the illness was usually much less than in the worst-afflicted parts of the Alps.

Originally a neutral term, ‘cretin’ fell out of use as an official medical term (in both English and French) in the early 20th century due to pejoration, i.e. the downgrading of a word’s meaning (3), and its use is now shunned. 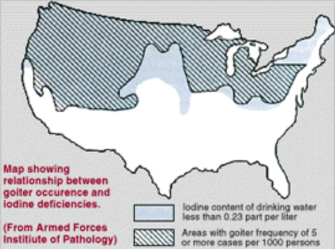 With the growth of trade in the 19th century, the dependence on locally grown produce throughout Europe diminished, greatly reducing the occurrence of the disease. Around that time, Swiss doctors were the first to propose iodine deficiency as the genuine cause of cretinism. However, it took three generations for this theory to be proven – if action had been taken immediately, about 50,000 sufferers would have been saved the disorder’s debilitating effects.

From 1922, Switzerland began to distribute iodised cooking salt, as well as iodised lozenges for children. Almost immediately, new cases of cretinism ceased to occur. At present, more than 120 countries have mandatory programs for adding iodine to food staples (typically salt, but also flour, rice or oil).

In developed countries, cretinism has almost completely been wiped out, thanks to standard screening for thyroid function on newborn babies. Iodine deficiency is still a sufficiently serious problem to remain the most common preventable cause of brain damage in new-borns and young children today. If the condition is found, its symptoms can be suppressed by lifelong administration of thyroxine.

(2) Derived via Provençal and French from the Latin gutturus, ‘throat’.

(3) A similar process occurred with ‘lunatic’ and ‘spastic’, no longer neutral descriptors, now adjectives with a decidedly negative connotation.

Tags
diseaseenvironmenthistoryhuman bodyillnessmap
In this article
diseaseenvironmenthistoryhuman bodyillnessmap
Related
Health
New blood types are often discovered following medical disasters
New blood types are regularly discovered by an unusual absence or an unusual presence — both of which can result in tragedy.
Neuropsych
How you breathe affects your brain
Your breathing rhythm influences a wide range of behaviors, cognition, and emotion.
Hard Science
200 years of exploring Antarctica
What we’ve learning from the world’s coldest, most forbidding, and most peaceful continent.
Health
COVID, RSV and the flu: A case of viral interference?
Viruses, it turns out, can block one another and take turns to dominate.
Neuropsych
Shopping with your nose: How body odors influence your buying behavior
Sniffing out a deal.
Up Next
Starts With A Bang
This Early Warning Signal Could Successfully Predict Betelgeuse’s Supernova
When the supernova occurs, a whole slew of signals will arrive at once. But there’s one hint that could successfully warn us in advance.As Betelgeuse continues to vary in brightness in […]