Three-quarters of tree species common in the eastern U.S. have moved their population centres westward over the last 30 years – an effect not predicted by assumptions about global warming. 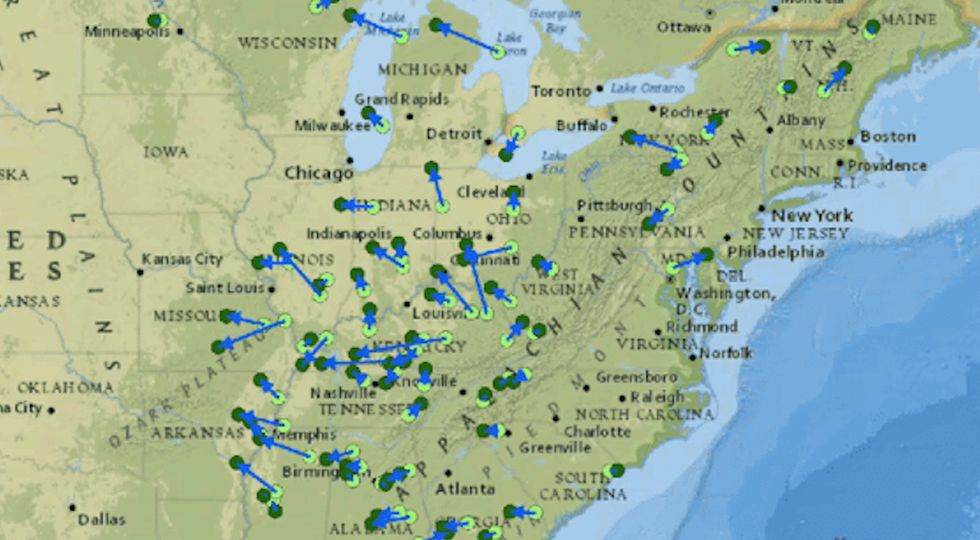 In our minds, few things are as place-bound as trees – with Birnam Wood in Macbeth and the Ents in Lord of the Rings as fictional exceptions to prove the rule. However, while individual trees are rooted, tree species as a whole are indeed capable of movement. Enough to baffle scientists, as shown on these maps, published in Science Advances.

The scientists studying abundance data for 86 tree species in the eastern U.S. (ranging from 1980 to 2015) knew what to expect: as the average temperature increases (1), tree species will migrate to higher altitudes or more northern latitudes. And indeed: 62% of the examined species showed a 'poleward shift'.

The direction and distance of the abundance shifts for 86 species.

“When (this result) came out, our eyes opened wide. Like, 'Wow, what's going on with this?”, Songlin Fei told The Atlantic. It's a riddle, wrapped in a mystery. The forestry professor at Purdue University and the other authors of the study have formulated a theory that explains “about 19%” the westward drift: the change in rainfall patterns over the past 30 years, which is also linked to overall climate change.

Total annual precipitation in the central U.S. has increased by more than 150 mm and has declined significantly in the Southeast, where severe droughts have occurred. Both changes can have a significant impact on ecosystems and species distributions.

Drilling down to regional level reveals huge peaks in the direction and speed of the migration.

The fact that the overall westward shift is 1.4 times faster than the drift northwards “suggests that vegetation dynamics are more sensitive to precipitation than to temperature, at least in the near-term time frame”, the study says.

That's not to say the northward movement isn't a major event in itself. Scientists know of a similar northward shift in the New England area during the early Holocene (10,000 to 8,000 years ago). “However, the historical process took place over several thousand years, whereas the observed shift in this study happened in a few decades, suggesting the impact of recent climate change”.

The study does not rule out non-climatic factors, such as conservation efforts, land use changes and forest management practices. For example, “the observed abundance change is positively correlated with the densification of forests, which is often attributed to diminishing fire frequency and severity”.

Meaning that 'conservation' is a relative term: paradoxically, preserving forests changes them into something they were not. And despite conservation or management efforts, America's trees are likely to continue their march west and north, following the changing patterns of temperature and rain.

East-west shifts mapped on a phylogram showing the evolutionary relationships between the species.

Study found here at Science Advances. Atlantic article here. Both sent in by M. Feldman, who wryly remarks: "Note that the trees appear to be escaping from Washington, DC".

(1) Over the past 30 years, the mean average temperature in the eastern U.S. has increased 0.16°C, with a larger increase in the northern part.