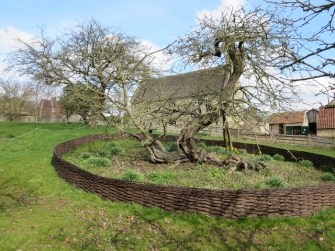 Isaac Newton’s apple tree at Woolsthorpe Manor, Lincolnshire. In the background: the house where he was born.

What a weird place this planet is. But especially southern Illinois, according to this map of gravity anomalies across three Midwestern states.

Gravity is what made the apple fall from a certain tree (in Woolsthorpe, Lincolnshire), causing Newton to wonder why it fell down straight. But the law of universal gravitation he formulated (and published in 1687) by way of explanation is a lot less uniform than you’d think. 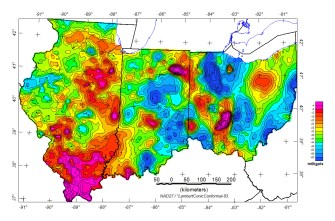 While the first four factors can be compensated for mathematically, it’s the local geology which produces random gravity anomalies of the kind mapped here.

This is a Bouguer gravity anomaly map, showing gravity variations resulting from lateral density variations in the earth. It looks like a relief map of invisible elevations and imperceptible depressions, grouped together in plateaus and peaks of higher-than-average pull and valleys and troughs of lower-than-average gravity. 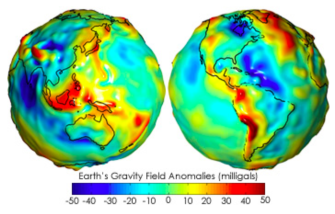 Of course, gravity anomalies are not exclusive to Illinois, Indiana and Ohio. Here’s a gravity anomaly map of the entire earth, in two hemispheres.

The Bouguer (pronounced boo-gay) gravity anomaly is named after French scientist Pierre Bouguer (1698-1758), a prodigy who succeeded his father as professor of hydrography at the tender age of 16. Among his many discoveries was the fact that small regional variations in the earth’s gravity field could be related to the varying density of subterraneous rocks in the subsurface.

It looks like Newton’s apples weigh a bit more in southern Illinois than they do on average, and a bit less in central Indiana and large parts of Ohio. While these anomalies may only account for variations in decimal points, the difference is big enough to have measurable effects: these gravitational anomalies cause the sea to bulge in certain places, and throw pendulum clocks out of sync.

What’s the anomaly in your neck of the woods? Check out this page at the International Gravimetric Bureau.

Mathematically, it is a monster, but we can understand it in plain English.
Life

Technology designed to listen for atomic bombs can also hear tornadoes.
Up Next
The Present