These maps are both data-rich and absolutely gorgeous. You’re looking at watershed maps, showing the flow of tributary streams into main rivers, and of those water courses into the sea (or final destinations inland). The streams are shown in the Strahler Stream Order Classification, which uses width to indicate the hierarchy of streams. Watersheds (a.k.a. drainage basins or catchment areas) are grouped together by color.

The maps are the work of Hungarian cartographer Robert Szucs, 33, who combines expertise in GIS with a passion for beautiful maps. “GIS is short for Geographic Information Systems. It’s a collective word for anything using spatial or geographic data — from monitoring changes in forest cover with satellite data to creating crime density maps for the police,” Szucs explains. “In this case, I’ve used GIS to create artistic maps, which is a beautiful hybrid of the artsy and geeky sides of my personality.” 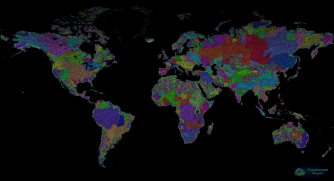 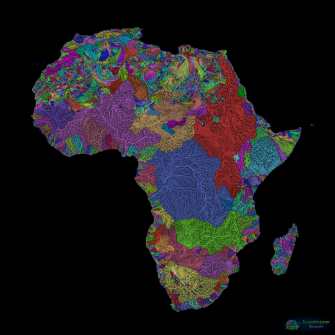 Africa is home to the rivers with the world’s second- and third-largest catchment areas: the Congo (in blue), with a basin of 1.44 million square miles (3.73 million km2), and the Nile (in red), with basin area of 1.26 million square miles (3.25 million km2). The Nile is the longest river in Africa, though (4,130 miles; 6,650 km), followed by the Congo: 2,900 miles (4,700 km). The Congo River’s alternative name, Zaire, comes from the Kikongo nzadi o nzere (‘river swallowing rivers’). Image source: Grasshopper Geography 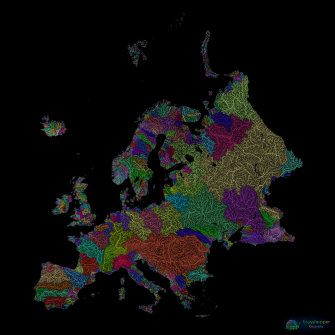 The Volga (in yellow) is the river with the biggest catchment area in Europe (just under 545,000 square miles; 1.41 million km2). It flows exclusively through Russia, and the catchment area is entirely within Russia as well. Europe’s number two is the Danube (in orange), which flows through 10 countries — more than any other river in the world. Its drainage basin (just over 307,000 square miles; almost 796,000 km2) includes nine more countries. Image: Grasshopper Geography 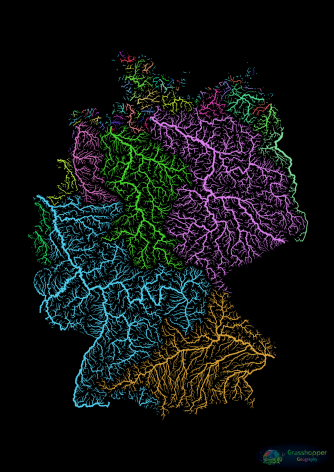 The hydrographic map of Germany is dominated by just four major drainage systems: the Danube (in orange) in the south, the Rhine (in blue) in the west, the Elbe (in purple) in the east and the Weser (in green) between the latter two. In Antiquity, the Rhine was the border between the Roman Empire and the Germans. Rome once attempted to shift the border to the Elbe, which would have radically altered the course of history, but it suffered a massive defeat in 9 CE at the Teutoburger Wald (roughly between both rivers). Image: Grasshopper Geography 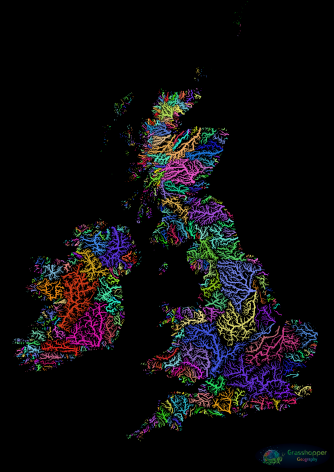 Both Ireland and Great Britain are islands, as a result of which neither boasts a continental-class river. Twenty of the 30 longest British rivers are less than 100 miles (160 km) long. The longest river in Britain is the Severn (220 miles, 354 km), its catchment area shown in blue in the southwest. Ireland’s longest river is the Shannon (224 miles, 360 km). Even combined they’re not as long as France’s Seine (483 miles, 777 km). Image: Grasshopper Geography 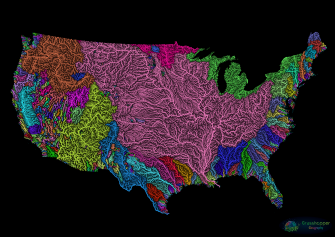 Spread-eagled across the central part of the United States, the Mississippi’s drainage basin covers all or parts of 32 U.S. states (and two Canadian provinces). The easternmost point of Ol’ Man River’s catchment area is really far east: Cobb Hill in northern Pennsylvania. Here rises the Allegheny, tributary of the Ohio, which in turn flows into the Mississippi at Cairo, Illinois. Image: Grasshopper Geography 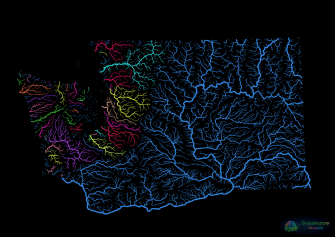 Even leaving out the Mississippi, there’s enough going on in the rest of North America to keep the eye occupied. Here’s a drainage map of Washington State. The big fish in this much smaller pond is the Columbia River (drainage area in blue), the largest river in the Pacific Northwest. Only in the western third of the state is there a colourful counterpoint, in the multitude of smaller river basins that are draining into the Pacific or into Puget Sound. Image: Grasshopper Geography 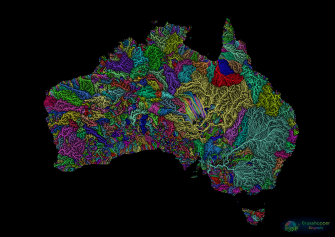 At 1,558 miles (2,508 km), the Murray is Australia’s longest river. It is often considered in conjunction with the Darling (915 miles, 1,472 km), the country’s third-longest river, which flows into the Murray. The Murray-Darling basin (in blue, in the southeast) covers just under 410,000 square miles (1.06 million km2), or 14 percent of Australia’s total territory. Don’t let that spidery network of river courses in the interior fool you: Australia is the world’s driest inhabited continent (Antarctica, bizarrely, is drier). Image: Grasshopper Geography 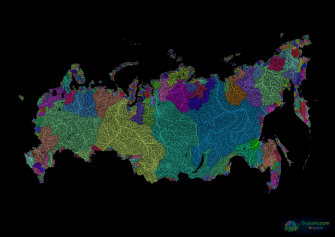 Four of the world’s largest drainage basins are in Russia: the Ob, Yenisei and Lena (origin of Vladimir I. Ulyanov’s nom de guerre, Lenin) entirely and the Amur, shared with China. The Volga may be Europe’s longest river, but 84 percent or Russia’s surface water is east of the Urals, in Siberia. The sparsely-populated region is traversed by 40 rivers longer than 1,000 km. Combined, the Ob, Yenisey and Lena rivers cover a drainage area of about 8 million km2, discharging nearly 50,000 m3 of water per second in the Arctic. Image: Grasshopper Geography

Szucs has managed to parlay his love for beautiful maps into a job designing them:

“I made a huge elevation map of Eurasia which was used in a documentary about horses and their migrations. There’s also a 12-foot wide mural in the making at Louisiana State University, based on one of my maps. And I made some maps for the BBC after they reached out, saying my work inspired a show on rivers. I’m not saying I was jumping on my bed from excitement after any of those requests, but maybe I was.”

Szucs is not just a theoretical map enthusiast, but also a practical one. He tries to move to a different country every few months, “donating” his mapmaking skills to worthy causes. He’s worked with archeologists on St. Eustatius, an island in the Caribbean, with marine biologists in Alaska, and for an orangutan conservation programme on Borneo, among other destinations.

“My moves are always temporary, linked with volunteering for an NGO. It’s a way of developing my skills, but also of seeing the world and experiencing new cultures,” Szucs said. Meanwhile, new map ideas bubble up. “My current favourite map as yet only exists in my head as an idea. I might have to learn a few new software applications to make it. Let’s hope I can find a way to make it happen. After that, I hope to be back in Alaska for a few months, working with whales again.”

Many thanks to Mr. Szucs for sending in these maps. See more at Grasshopper Geography.

Tags
environmentmapnatural resourcesnatureriverswater
In this article
environmentmapnatural resourcesnatureriverswater
Related
Life
Strange life forms create an “alien” ecosystem in an abandoned uranium mine
Slimy biofilms made up of bacterial and eukaryotic life forms have taken over an abandoned, flooded uranium mine in Germany.
The Present
Climate change is altering the chemistry of wine
Smoke taint from wildfires is gross, even to wine amateurs.
Life
Our antidepressant drugs are affecting animals and ecosystems
A toxicologist explains the impacts of antidepressants on fish — and no, they’re not getting any happier.
Hard Science
200 years of exploring Antarctica
What we’ve learning from the world’s coldest, most forbidding, and most peaceful continent.
Life
Most of the seafloor is a thick graveyard of ooze
Each year, several trillion pounds of microscopic silicon-based skeletons fall down the water column to pile up into siliceous ooze.
Up Next
The Past
It’s February and according to pagans, spring is upon us
Have we turned the corner of a cold winter?