Last year, when nobody was paying attention, Germany got a bit bigger. In the previous century, the central European country waged two wars to increase its territory. But some time in the past months or years, it gained about 500 square meters (5,382 sq. ft) without a single shot being fired. All thanks to the Kirnitzsch, a small river that forms part of Germany’s border with the Czech Republic. As someone noticed in April 2016, it changed course – to the advantage of the Germans.

The Kirnitzsch flows in the south-east of the German state of Saxony, in a picturesque, hilly area nicknamed Sächsische Schweiz (Saxon Switzerland), also the name of a National Park on the border with the Czech Republic. 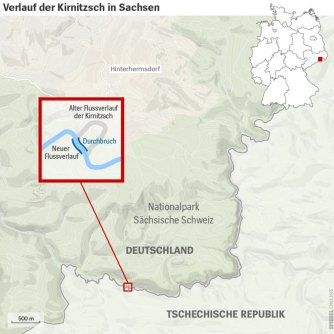 Setting an administrative border in a river may seem like a good idea, but over time, rivers change course. Leaving governments to ponder: does the border follow the river, or stay as it was? The latter option is the preferred one for the U.S. states whose border runs along the Mississippi: zoom in on the map, and you go see little enclaves and exclaves on either side of the Big Muddy, marking its ancient course, and the present state borders (see also #178 and #208).

Judging by the firmness of the ground on the Kirnitzsch’s former course, Böhm suspects the straightening to have happened as far back as 2013, when the area was last flooded. An oxbow is all that remains of the former riverbed. As a result, Germany has gained – and the Czech Republic has lost – an area of about 18 by 28 meters (60 by 90 feet).

Image taken here from the article in Der Spiegel. Many thanks to Till Vallée for pointing it out.

Could dark energy be caused by frozen neutrinos?

Image credit: NASA / GSFC / Dana Berry.A new idea links the Standard Model’s most elusive particles with the zero-point energy of the Universe.“If you’re puzzled by what dark energy is, […]