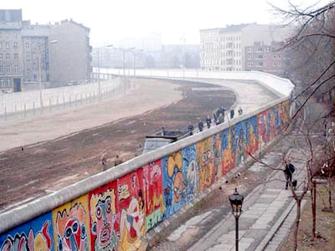 The GDR may be forgotten, but it’s not gone. Apart from a shrinking handful of diehard nostalgics, nobody mourns the passing of the German Democratic Republic, as communist East Germany (1949-1990) was officially known.

It became such an exemplar of the chasm between the high ideals and grim reality of Soviet-style socialism that the regime literally had to fence in its citizens to keep them from running away. Up until the building of the Berlin Wall (1961), hundreds of East Germans each day ‘voted with their feet’, defecting to West Germany – decadent and capitalist, yes; hence also a lot more fun.

Inevitably, the fall of the Wall in 1989 was the death-knell for East Germany. We’ve just passed the 30th anniversary of German reunification, which came into effect on October 3, 1990. But after three decades of painful economic, political, and cultural adjustments, the ghost of East Germany lingers on the map.

Like secret messages that become visible under UV light, the contours of the GDR come out when you apply the right data filters. And not just once or twice. Again and again, we see the old (and to some, familiar) borders emerge. In other words, the German Democratic Republic is a map zombie. That’s because life continues to be different in former East Germany – even if it’s now just the east of Germany.

Below are some examples, selected from the Facebook group with the self-explanatory name: East Germany is discernibly visible on this relatable map. 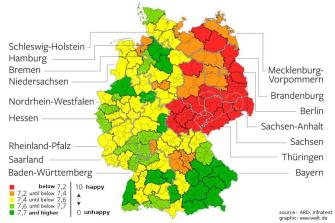 Happiness map of Germany. Can you spot the GDR?Credit: Facebook / ARD, infratest / welt.de

East Germans are less happy than their western compatriots. Out of a maximum of 10 on the happiness scale, most of the former GDR colors red (below 7.2), the rest orange (between 7.2 and 7.4). 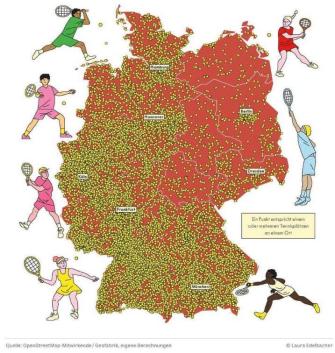 In the old Soviet bloc, sports were a propaganda tool, and athletic excellence a way to prove the regime’s supremacy on the world stage.

But apparently, tennis was not the right vehicle – perhaps the East German communists thought it too bourgeois. That would explain why there is such a marked difference between east and west when it comes to the distribution of tennis courts. 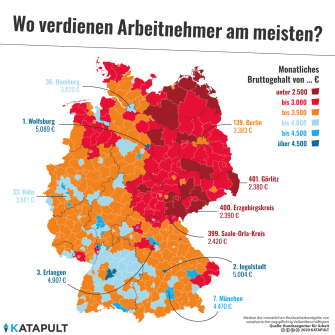 The average wage in Wolfsburg is double that as in the adjacent area in the former GDR.Credit: Facebook / Katapult

Thirty years after reunification, Germany’s economy remains unbalanced along familiar lines. This map shows the averages for gross monthly wages: below €3000 in red areas (below €2500 in dark red zones). Almost all of the light red areas are in the east, none of the dark red ones are in the west.

Tantalizingly, Germany’s highest-earning area (Wolfsburg, €5089) is right on the former East German border, next to an area with half the average wages. Car aficionados will recognize the name of the city as the home of Volkswagen HQ and the world’s largest car plant. 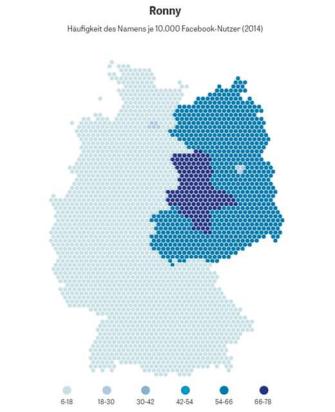 Older British TV viewers will remember a comic duo called “The Two Ronnies.” If they had been German comedians, their names would have immediately pegged them as Ossis (eastern Germans).

‘Ronny’ is as popular in the east as it isn’t in the west. In the eastern German state of Saxony-Anhalt (the dark-blue area on the map), between 66 and 78 out of 10,000 Facebook users carry that first name. In the rest of the former GDR (the middle-blue area), it’s 54 to 66. In almost all of western Germany, the rate is below 18. 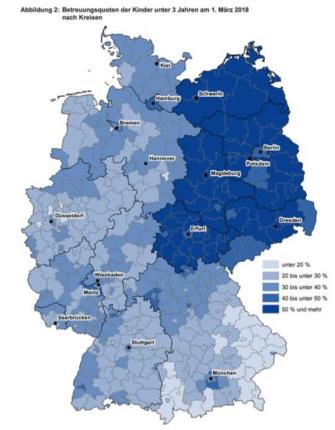 In the east, more than half the kids under three attend publicly-funded daycare. Credit: Facebook

The legacy of the communist past isn’t all bad, it seems. Some collectivist traditions and provisions survive. Like more public childcare. This map shows the share of under-threes going to publicly-funded daycare centers: over 50 percent in most of the former GDR. 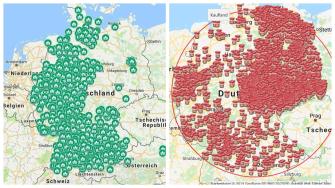 Like one of those sets of twins separated at birth, East and West Germany are a fascinating study in similarities and differences – some large, some small. The economic powerhouse that West Germany became needed foreign workers. Many came from Turkey, as evidenced by this map of mosques in Germany: only a handful are in the east.

In its decades alone, East Germany developed a range of household products, often barely disguised copies of western consumer goods. Many are on display in Berlin’s DDR Museum. Nudossi, often dismissively called ‘Ost-Nutella’, is one of the rare brands that survived reunification. Perhaps that’s because the spread contains 36 percent hazelnuts, almost three times the amount of actual Nutella (13 percent). Still, Wessis (western Germans) are clearly less keen on the stuff. 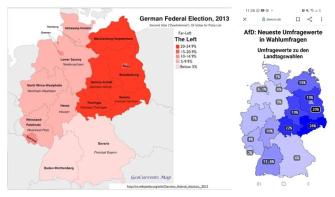 Voting patterns in the east tend to be more eccentric in the east.Credit: Facebook / GeoCurrents

Voting patterns in the east tend to be more eccentric in the east. The map on the left shows the results for the 2013 federal elections of Die Linke (the Left Party), which positions itself firmly to the left of the SPD, the mainstream social-democratic party. Die Linke garnered between 20 percent and a quarter of the votes right across the former GDR, and was nowhere near as successful anywhere else in Germany.

More recently, the right-wing populists of Alternative für Deutschland (AfD) have found a lot of support in the east. The undated map shows voting intentions for recent upcoming state elections. AfD is particularly strong in the south of the former GDR (26 percent in Saxony, 22 percent in Thuringia). Its highest score in the west is 11.6 percent in Baden-Württemberg. 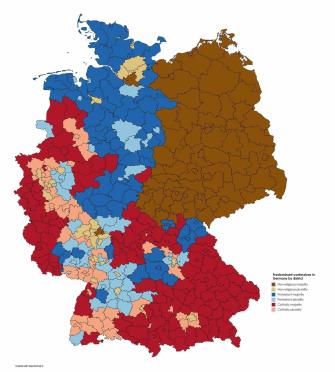 Confessionally, Germany also remains a divided nation. This map shows which religion dominates where. Catholics predominate in the south and west (dark red: majority, light red: plurality). Protestants are a majority in the north and middle (dark blue), a plurality in the southwest (light blue).

East Germany is easily discernible: it’s the part where the main religious affiliation is ‘none’. That also includes the whole of Berlin (including the western half), plus the western cities of Hamburg and Frankfurt. 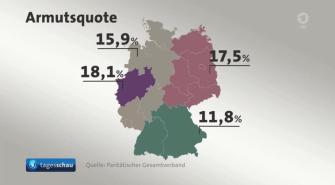 The western state of North Rhine-Westphalia has an ever higher poverty rate than the former GDR.Credit: Facebook / Tagesschau

The former GDR has a consistently high poverty rate: an average of 17.5 percent throughout all six Länder (states). But there’s a silver lining, of sorts: the poverty rate is even higher in the western state of North Rhine-Westphalia (18.1 percent), which contains the Ruhrgebiet, a.k.a. Germany’s Rust Belt. 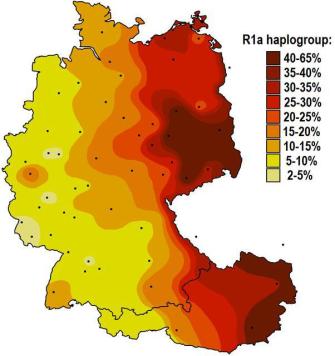 The R1a haplogroup is a genetic marker associated with Slavic populations.Credit: Facebook

The former border between East and West Germany mirrors a much older one: the western extent of the Slavic zone around the year 1000. This map shows the spread of the R1a haplogroup among locals.

This genetic marker is associated with Slavic populations. It is prevalent throughout the former GDR, particularly the south – and in eastern Austria, by the way. R1a ‘islands’ further west may be the result of more recent immigration waves, by Polish guest workers for example. 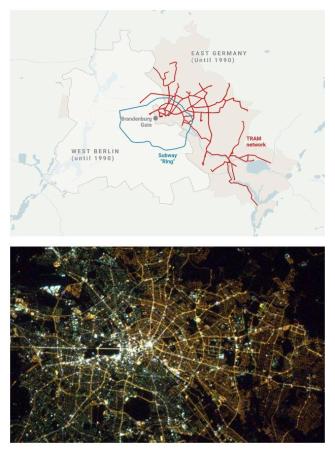 In Berlin, the past is never dead. In fact, it’s not even past.Credit: Facebook

And finally, two images that zoom in on Berlin. Now the reunified capital of a reunified country, before 1990 it was as divided as Germany itself. And that is still visible, if you know where to look.

At the map of Berlin’s streetcars (top), for example. West Berlin never took the step to restore the pre-war streetcar network on its territory. East Berlin did. And that’s still the case – with one exception: a single line was extended from the east to the west, a rare example of the west adopting anything ‘eastern’.

When night falls, the division between east and west can still be seen from the sky. In the east, street lights use sodium vapor lamps, providing a warm orange glow. In the west, the lamps are fluorescent, resulting in a brighter yellow light.

All maps taken from the Facebook group East Germany is clearly visible on this relatable map. Where possible, credit was given to the original content provider.

Like Dua Lipa, he had to create new rules.
Up Next
Health

Interventions in school years can prevent “deaths of despair”

While most of these deaths are driven by external factors, interventions can still help prevent them.