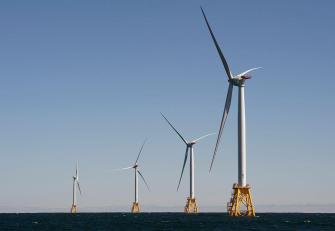 Wind turbines of the Block Island Wind Farm, so far the only offshore wind project in operation in the U.S.Credit: Don Emmert/AFP via Getty Images

​On Monday, President Biden designated a ‘Wind Energy Area’ in the waters between Long Island and New Jersey. It’s part of an ambitious plan to build giant wind farms along the East Coast. There’s currently only one offshore wind farm in the Eastern U.S., off Rhode Island (1).

In February, the Danish government announced it would build the world’s first ‘Energy Island’. Everybody else in the world, take note: if the Danes pull this off, similar islands could soon pop up off your shores – perhaps also in the New York Bight.

So, what’s an Energy Island, and why does Denmark want one? For the answer, we spool back to June 2020, when a broad coalition of Danish parties, left and right, in government and opposition, concluded a Climate Agreement. This is Denmark’s plan not only to make a radical break with fossil fuels but also to show the rest of the world how it’s done. 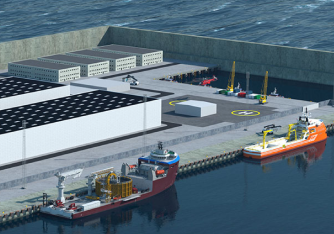 Close-up of Energy Island, with two of the seawalls at the back and the port at the front. Credit: Danish Energy Agency

Due in large part to its pioneering work with wind energy, Denmark has a green image. But that hasn’t always reflected reality. Yes, in 2019 the country generated 30 percent of its energy from renewable sources – earning it 9th place worldwide (2). But in 2018, Denmark also was the EU’s leading oil producer (3).

Under the Climate Agreement, that will stop. Denmark will no longer explore and develop new oil and gas fields in its section of the North Sea. Extraction will be gradually reduced to zero. In exchange, Denmark will dramatically scale up the production of sustainable energy via offshore wind farms. The ultimate goal: nationwide carbon neutrality by 2050. 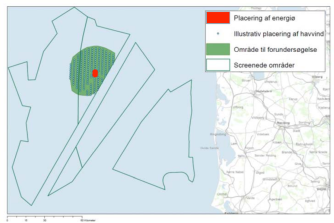 As the shallow parts of the North Sea (<66 ft; <20 m) fill up with wind farms, the issue of managing the energy flow produced by these farms becomes acute. The obvious solution would be to build a central point where the energy is collected, converted from AC to DC and transmitted to one or more points onshore. Centralised management of the wind farms would mitigate the fluctuations in energy production and make it easier for supply to meet demand.

If supply is greater than demand, these collection points can also serve as storage units. Excess energy could be stored in batteries or transformed into hydrogen via electrolysis. If and when necessary, the hydrogen can then be transported onto land and reconverted into electricity.

The Dutch are thinking about it, and some have suggested the Dogger Bank as an ideal location: shallow and central within the North Sea, ideally placed to distribute energy to the various countries bordering the sea. But the Danes are doing it. The Climate Agreement envisaged not one, but two energy islands.

One would be Bornholm, Denmark’s Baltic island, halfway between Sweden and Poland, which would serve as the hub for local offshore wind farms. But the other would be an entirely new, entirely artificial island in the North Sea, to be built about 50 miles (80 km) off Thorsminde, on the western coast of Jutland. 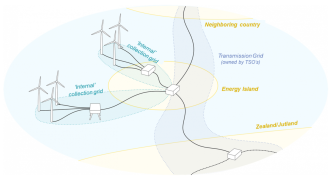 Schematic overview of how an Energy Island could serve as a hub for collecting and redistributing sustainable energy.Credit: Danish Energy Agency

In February, the Danish government revealed how much this Energi-Ø would cost, how long it would take to build – and what it might look like.

The plan also foresees a plant for hydrogen production on the island, either to be piped onshore, or stored and transported in large batteries. 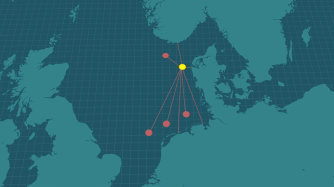 In all, the island would cost DKK 210 billion (US$33 billion) to build – by far Denmark’s largest construction project (6).

The project will be undertaken in a public-private partnership between the Danish state and commercial interests. Because it is ‘critical infrastructure’, the state will retain a stake of at least 50.1 percent in the project. There are two scenarios for co-ownership:

The Danish government needs private-sector input to overcome unknown and as yet untested aspects of the project, not just in terms of design and building an entire island from scratch, but also on how to operate and maintain it, and even when it comes to financing and risk management.

But where there’s risk, there is potential. If the project is successful, it will become the blueprint for similar energy islands the world over – and the companies that helped build the first one, will be in high demand to build the other ones too, perhaps soon in Biden’s ‘Wind Energy Area’.

(5) The Bornholm energy hub is projected to top out at 2 GW.

(6) Inaugurated in 2000, the famous Øresund Bridge (Øresundsbroen), connecting Sweden to Denmark, cost about DKK 25 billion (US$4 billion) in today’s money. When it’s finished (by 2029, if work continues apace), the Fehmarn Belt Fixed Link (18 km) between the Danish island of Lolland and the German island of Fehmarn, will be the world’s longest road/rail tunnel. It will have cost about DKK 55 billion (US$ 8.7 billion).

A “bio-battery” made from genetically engineered bacteria could store excess renewable energy and release it as needed.
Strange Maps

The site will be the first working example of a geological disposal facility.
Up Next
Hard Science

Can spacekime help us make headway on some of the most pernicious inconsistencies in physics?