Where exactly is the grave of Andreas Vesalius? This historical mystery, at the unlikely intersection of anatomy, archeology and cartography, could soon be solved. But not without a final crowdfunding effort.

It’s a mystery tinged with irony. Vesalius (1514-1564) popularised autopsies and (unwittingly) kicked off the centuries-long trend of ‘resurrectionism’: snatching bodies for dissection by medical students. Now it’s his own grave that scientists are after, and their search involves a studious postmortem of the landscape where he was buried, with ancient maps as material evidence.

The search started some time before 2014, the 500th anniversary of Vesalius’s birth. To celebrate that event, medical artist Pascale Pollier set out to reconstruct the face of Vesalius, from his actual skull – a fitting tribute to the father of modern anatomy. But where was that skull? The historical record showed that Vesalius died on the Greek island of Zakynthos. And that’s where the trail went cold.

It’s fair to say that few scientists have been as consequential for the development of modern science – in particular medical science – as Vesalius. So how could his last resting place have been neglected, forgotten and ultimately lost?

Born in Brussels to a family of apothecaries and physicians, Andries van Wesel later latinised his name to Andreas Vesalius, as was the fashion among Renaissance scholars. He studied anatomy in Paris and Louvain, where he famously robbed a corpse from a gibbet outside the city walls in order to procure a complete skeleton. He obtained his doctorate in Padua in 1537, then immediately received a professorate there, teaching surgery and anatomy.

His seminal work is the seven-volume De humani corporis fabrica (‘On the Fabric of the Human Body’), published in Basel in 1543, when Vesalius was just 29 years old. The book is a milestone in the transition from the symbolic approach to medicine to an empirical one. With his insistence on learning via dissection of the human body, Vesalius not only improved upon, but even superseded Galen, whose teachings on medicine had been authoritative for over a millennium, despite the fact that Galen’s autopsies on Barbary macaques were as close as he got to human anatomy.

The Fabrica has been called “the most beautiful medical book ever published”, combining the best science, art and typography that 16th-century Europe had to offer. In 2011, the only completely coloured first-edition copy of the Fabrica known to exist (probably the one presented by Vesalius to Charles V in the autumn of 1543) sold at Christie’s for over $1.6 million, more than double the highest estimate of $600,000. Because the colouring was most likely carried out under the supervision of Vesalius himself, the author’s portrait provides the only historical basis for our knowledge of Vesalius’s complexion and hair colour.

For Vesalius, publication of the book also marked a turning point in his career. He left academia to become the personal physician to Emperor Holy Roman Emperor Charles V and from 1556 to his successor Philip II and their respective entourages, in Spain.

In 1564, Vesalius, a devout Catholic, left Spain for a pilgrimage to Jerusalem. He visited the Holy Places, but never made it back. It was long assumed that he had been shipwrecked on the island of Zakynthos, then a Venetian colony. Scientists now think Vesalius fell ill on the sea voyage home – with scurvy, some argue; general fatigue, say others. Recently rediscovered eyewitness reports say he collapsed on the quay of Zakynthos, dying in October 1564.

Previously, Vesalius was thought to have been buried at the Franciscan abbey at Kalogerata, near the beach. However, reports from European pilgrims to Jerusalem place the tomb at the local Catholic church of Santa Maria delle Grazie (1).

Ground plan of the church of Santa Maria delle Grazie (1806)

That further complicates matters, as the church was destroyed in the big earthquake of 1953 which levelled most of the buildings on the island. The ruins of the church were bulldozed into the sea, and it was never rebuilt. The city itself rose from its ashes on a slightly different street grid.

So in 2014, with the help of Belgian embassy in Greece, Belgian archeologists conducted Phase One of the Quest for the Lost Grave of Vesalius. Painstakingly matching historical maps of the area to satellite imagery and modern cartographic data, Dr. Sylviane Déderix identified the exact location of the ruins of the Santa Maria delle Grazie church: on the north side of the city, partly under the intersection of Kolyva and Kolokotroni streets, and partly under some adjacent houses built after the quake. 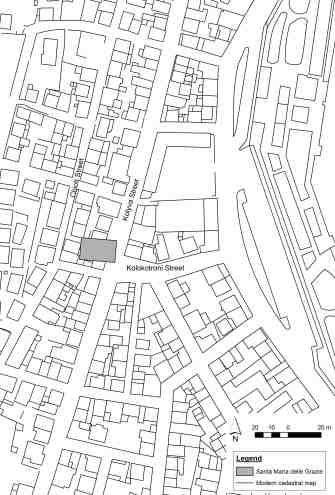 Location of the vanished church on the current street grid.

So far, so good. But now, to enrich the data of the first phase, more applied cartography is necessary, specifically: tracking down cavities, foundations and other subterranean anomalies via ground-penetrating radar (GPR) and electrical-resistivity tomography (ERT). The archeologists have now received permission from the Greek ministry of Culture to perform this non-invasive research. Work could start as soon as September, if the crowdfunding campaign to raise the necessary funds, now tantalisingly close its goal, is successful.

Location of the church on Google Earth.

If Phase Two produces actionable results, Phase Three would consist of targeted, small-scale excavations in areas that could hold the grave. And there is indeed a good chance that Vesalius is still in the ground, says Theo Dirix, of the Vesalius Continuum project: “Previous construction work on the spot has already turned up funerary slabs, proving there was a cemetery. Moreover, one of them dates from around the time Vesalius was buried here”.

One report suggests Vesalius’s tombstone may have been looted in 1571 by the Turks. If bones are found without identifying inscriptions, it is hoped they will yield enough DNA for forensic analysis; the project has already tracked down descendants of Vesalius’s mother Elisabeth Crabbé for mitochondrial DNA comparison.

There is however a small chance that bones yielded by the underground on this specific plot of Zakynthos belong to another luminary from centuries past. The church was constructed over a much older cemetery; in the 1540s, about two decades before Vesalius was interred at the church, a grave believed to be that of the famous Roman orator Cicero was discovered in its grounds.

Many thanks to Theo Dirix for the images used here. For more on the search for Vesalius’s grave, go to Vesalius Continuum.

Even with all the recent impacts we've seen, it might be more "foe" than "friend" to us.
Up Next
Thinking

Where are the four "horsewomen" of new atheism? Well, here are two of them, secular scholars Rebecca Goldstein and Susan Jacoby.