Take all the Christians out of the United States and these are the biggest religions for each state: a Buddhist West, a Muslim crescent across the South and Midwest, and a Jewish Northeast. 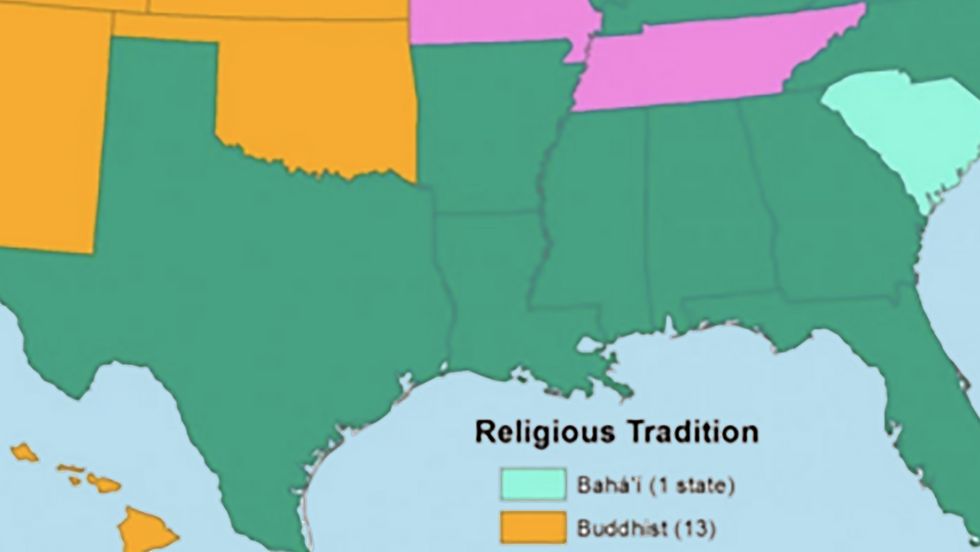 Take all the Christians out of the United States (yes, you too, Mormons!), and these are the biggest religions for each state. An interesting pattern emerges: a solidly Buddhist West, a Muslim crescent across the South and Midwest, and a Jewish Northeast.

To be fair, imagining America without Christians is a big ask. Just over 70% of all Americans are affiliated with a branch of the Jesus-based faith – a vast majority of those (46.5%) with one of the Protestant denominations, most others (20.8%) with the Catholic church.

But America is home to many faiths. The two other Abrahamic faiths are also the biggest of those smaller religions: Judaism (1.9%) and Islam (0.9%). Hinduism and Buddhism, both originating from the Indian subcontinent, each represent 0.7%.

According to the 2014 Pew Forum survey on religion in the U.S., that leaves 1.8% for other religions, and 22.8% for the unaffiliated (atheists, agnostics, 'spiritual but not religious').

In our world, Christianity is the biggest religion in each state of the Union. But in the alternate-universe, non-Christian America of this map, the nation is divided between three main faiths (and two smaller ones).

The Muslims dominate the biggest number of states (coloured green), but fall short of an outright majority: they rule the roost in 20 states across the old Confederacy, the Midwest and the Northern Plains. It's a contiguous area, but only just: the North Carolina-Georgia corridor is threatened by a Jewish-Bahai pincer movement.

Jewish America consists of 15 states (in pink): all of the Northeast, down to Maryland and west to Ohio. Three Jewish outposts – Minnesota, Missouri, Tennessee – almost form a second contiguous kosher zone, if it weren't for the halal stumbling block of Iowa.

The West Coast (plus Alaska and Hawaii) are solidly Buddhist (orange), an area which extends all the way to Oklahoma and Kansas. The 'eastern' leanings of the western U.S. are somewhat reminiscent of the Japanese sphere of influence as described in The Man in the High Castle (see also #700).

Hindus (red) form the majority in two states far away from each other: Arizona and Delaware. The Baha'i faith (light green), numbering no more than a few hundred thousands, manages to capture the state of South Carolina.

Map produced by the Association of Statisticians of American Religious Bodies in 2012, based in the 2010 U.S. Religion Census. Found here at the Washington Post.