After the Apocalypse, when what’s left of humanity huddles together in spherical cave cities below Manhattan, there’ll still be Coca-Cola. And at least one (subterranean) helicopter.

At least that’s according to this map, which appeared in the December 1969 issue of Esquire under the title “Plan for an Underground Nuclear Shelter.” This was the height of the Cold War, when the fear of nuclear annihilation was constantly at the back of people’s minds — if not the front.

The map was devised by Oscar Newman, architect and urban planner. He proposed creating these underground cities by… using nuclear explosions. Was he being serious? Is this map a damning, darkly sarcastic indictment of the horror of nuclear war, or was it intended (and received) as an achievable countermeasure?

One thing’s for sure: Newman didn’t get the idea of using nuclear weapons for ‘civilian’ use ex nihilo. He was recalling a nuclear test conducted in 1962 in Yucca Flats, Nevada. Code-named Storax Sedan, it explored the possible application of nuclear explosions for mining and other civil engineering purposes.

The blast created the so-called Sedan Crater, at 1,280 feet (390 m) wide and 320 feet (100 m) deep the largest human-made crater in the U.S. Within seven months of the explosion, the bottom of the crater could safely be walked upon without protective clothing.

On the other hand, Storax Sedan on its own generated almost 7% of all radiation which fell on the U.S. population during the whole period of atomic testing at the Nevada Testing Site (1). No other nuclear test contaminated more Americans than Storax Sedan.

Oscar Newman’s idea here was that a series of nuclear explosions would hollow out spherical caves in the rocks below Manhattan. According to John F. Ptak, who discussed Newman’s plan on his blog, one of Newman’s nuclear spheres would have a volume of 1.2 cubic miles (5 km3), equal to “a goodly chunk” of the volume of Lake Mead. 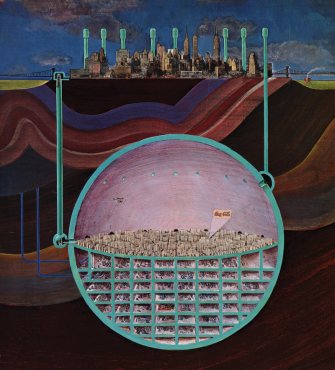 The widest horizontal level of each sphere would be turned into a city grid with space for residential and commercial development, with industry and/or power generation going on underneath – in the under-underground, so to speak. Giant air filters would provide clean air from the surface of the planet, and add a of tower building to the New York skyline.

“Manhattan (could) have a half-dozen such atomic cities strung under the city proper (…) the real problem in an underground city would be the lack of views and fresh air, but consider its easy access to the surface and the fact that, even as things are, our air should be filtered and what most of us see from our windows is somebody else’s wall”.

So, living under an iron-clad dome underground after a nuclear strike has reduced the surface city to rubble won’t be that different from what life was like before. There’ll still be a shortage of views and of fresh air, and a helicopter will be whizzing overhead while in the distance a Coca-Cola sign blinks on and off.

However, the sneaking suspicion that Oscar Newman had a talent for double-layered social criticism is cancelled out by his Defensible Space Theory, which deals rather humourlessly with crime prevention and neighbourhood safety (2).

Launched in the early 1970s, DST’s heyday passed by the late 1980s. Yet it still has a residual influence, and continues to have its proponents. The same cannot be said about his idea to nuke New York City’s underground by way of advanced city planning.

But with nuclear was once again a conceivable threat – although this time coming from North Korea rather than Soviet Russia – and housing costs in New York going through the roof, perhaps it’s time to revisit Newman’s plans to create extra living space under Manhattan – even if by nuclear explosion.

Got a strange map? Let me know at[email protected]

(1) In 2005, U.S. Representative Ellen Tauscher used the Sedan explosion as an example of a test with high fallout. The Congressional Record incorrectly transcribed the name of the test as ‘Sudan’. Within days, the Sudanese government protested the misuse of its name, and the Chinese new agency Xinhua published an article claiming that Sudan blamed the U.S. for increased cancer rates among its people.

(2) Developed in the early 1970s and influential on the later development of the Broken Window theory, the DST states that urban areas are safer when local residents feel a sense of ownership and responsibility with regard to those areas. According to Newman, this explains why there is more crime in high-occupancy high-rise projects, and less in lower, less densely populated ones. Following the logic of this theory, crime can be prevented via the design of the urban environment.

Related
The Present
The Taoist philosophy behind Alibaba, China’s e-commerce giant
Alibaba has played a key role in China’s meteoric economic rise.
The Well
Can we condition ourselves to be heroes?
Neuroscientist Robert Sapolsky on the science of temptation, and the limitations of your brain’s frontal cortex.
▸
6 min
—
with
Robert M Sapolsky
Thinking
3 brain games to practice deductive, inductive, and abductive reasoning
Take a closer look at the different types of reasoning you use every day.
Starts With A Bang
The galaxy cluster that broke modified gravity
19 years ago, the Bullet Cluster provided an empirical proof for dark matter. Even today, modified gravity still can’t explain it.
Neuropsych
Psychology studies that go viral are likelier to be bogus
A new 20-year analysis of over 14,000 psychology studies finds that a study’s media coverage is negatively linked to its replicability.
Up Next
Politics & Current Affairs
Millennials are at higher risk for mental health issues. This may be why.
The results are higher levels of anxiety, depression, and even thoughts of suicide.