Most maps are directional tools, means rendered meaningless beyond their end. But some maps are their own destination. Like this one, by Tom Gauld – a map one would like to get lost in.

Gauld’s map is not a standalone, though. It illustrates ‘Fable’, a short story by Charles Yu in The New Yorker. Like the story – and like much of Gauld’s cartoon work – the map is both minimalist and highly detailed, mixes the mythical past with the pedestrianism of the present, and manages to be genuinely ominous while also knowingly self-ironical. 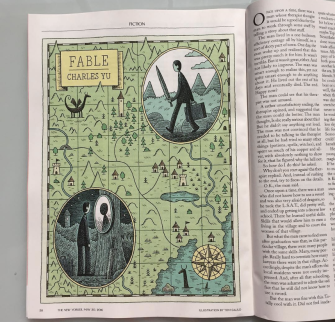 Two vignettes illustrate key aspects of the map, and the story: the one at the top shows the sword- and briefcase-wielding hero, out on a quest. The bottom one shows the hero, reflecting – literally as well as in the other sense.

Fitted with a compass rose at bottom right, the map is dotted with hills both pointy and round, with trees both singular and in a forest-like huddle, and with the pennanted turrets and castles where the 1% dwell, as well as the various cramped cottages housing the rest of us. The landscape is criss-crossed by roads, rivers and bridges across rivers, suggestive of the voyage implicit in a quest.

Rearing an adorable head above the waves, a sea monster pokes up from the southern ocean. Its land-based cousin stalks the map’s northwest. The hero in the top vignette is taking his sword to that dragon, but what happens is not the slaying you could have expected from your standard-issue fairy tale, once upon a time.

To find out what happens, read the story, or hear the author read it, here at The New Yorker. Or make up your own story, based solely on this map. Get lost! 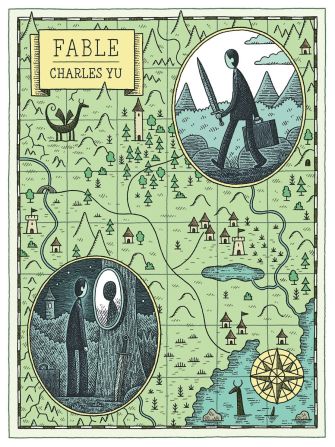 There were many other species of human on the planet. Svante Pääbo discovered one of them.
Up Next
Technology & Innovation

Why Is the Navy (We Think) Jamming The West Coast’s GPS This Month?

The FAA has issued a mysterious advisory telling pilots not to trust their GPS for several days this June.