A Map of the Universe, According to René Descartes

Cartesian vortices are *so* 17-th century. 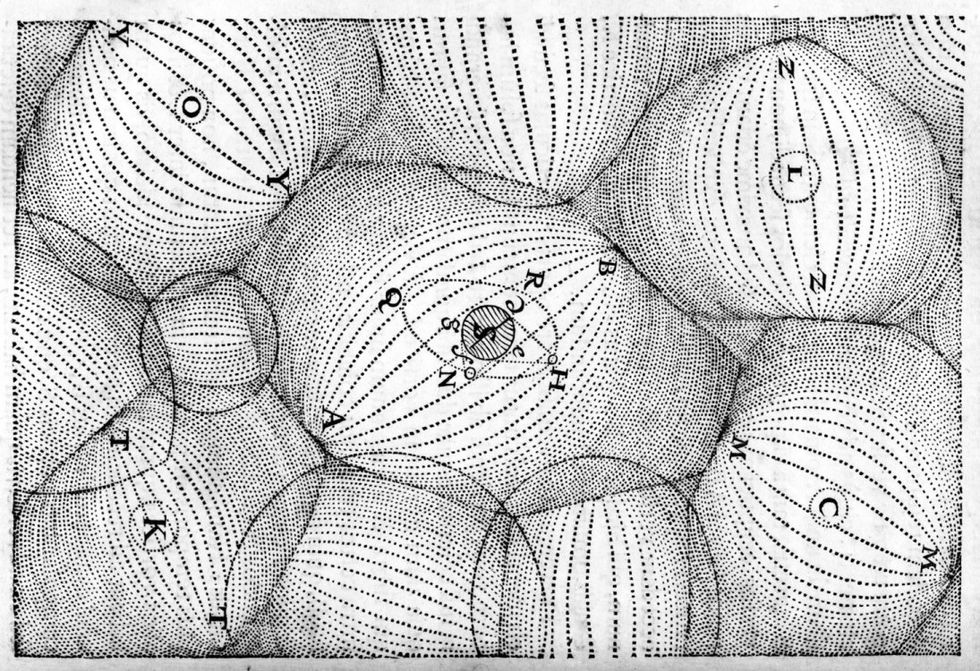 Often regarded as the father of Western philosophy, René Descartes (1596-1650) is mostly remembered by the pithy summary of his method: Cogito, ergo sum - 'I think, therefore I am'.

Descartes shifted the philosophical debate from the question What is true, which implies a God as the ultimate guarantor of truth, to What is certain, requiring that human intellect alone sort the knowable from the unknowable.

But the cogitating Frenchman did even more than this. He also was a mathematician (developing analytic geometry) and a scientist (contributing to the field of optics), and had a thing or two to say about the cosmos as well.

This map of the universe was taken from his Principia philosophiae ('The Principles of Philosophy', 1644). The map illustrates Descartes' vortex theory of planetary motion, by which he attempts to explain the orbits of planets and comets and other celestial phenomena.

In cartesian cosmology, a vortex is a large circling band containing these planets or comets and other material particles. Our solar system and the entire universe consist of a network of interlocking vortices, which are subject to gravitational and centrifugal powers.

All matter in the universe exists in one of three elements, and the universe itself operates, mechanically and circularly, as it did when it was created by God. By placing the earth at rest within a vortex band as it circled the sun, Descartes aimed to endorse a form of heliocentrism without confronting Church doctrine, which stated that the earth rests motionless within a celestial system that revolves around it.

While this vortex theory originally was one of the most influential aspects of cartesian physics, that influence was on the wane by the mid-18th century.

Map found here at Pinterest and here at Brain Pickings. More on the vortex theory here at the Stanford Encyclopedia of Philosophy.