Scientists from the Douglas Mental Health University Institute’s Translational Neuroimaging Laboratory at McGill have developed an algorithm that reliably detects signs of dementia before its onset. The technology could be used to help families prepare for treatment options, and to help researchers select better candidates for clinical trials that test drug effectiveness.

The findings were detailed in a study published in the journal Neurobiology of Aging.

“If you can tell from a group of of individuals who is the one that will develop the disease, one can better test new medications that could be capable of preventing the disease,” said co-lead study author Dr. Pedro Rosa-Neto, an associate professor of neurology, neurosurgery and psychiatry at McGill University, to Live Science.

The algorithm works by searching brain scans for the buildup of amyloid, a protein that accumulates in the brains of people who develop mild cognitive impairment and, later, dementia. Amyloid starts accumulating in the brain years, or sometimes decades, before the onset of dementia, and it does so at differents rates and locations in the brain. What’s more, not everyone with amyloid buildup necessarily develops cognitive impairment. This has made spotting the development of dementia difficult for scientists.

Machine learning could make it much easier.

Using hundreds of PET scans available through the Alzheimer’s Disease Neuroimaging Initiative (ADNI), scientists trained an algorithm to spot signs of dementia by having it first analyze the amyloid buildup in the scans of patients who had mild cognitive impairment. They then showed it brain scans taken before patients had developed the disease. 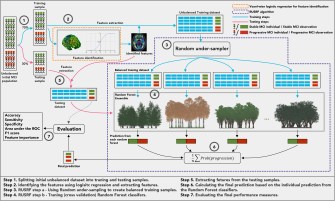 (Summary of the steps followed to train the algorithm to predict the progression of dementia.)

Scientists then presented the algorithm with a new set of brain scans, some of which were from patients who currently had mild cognitive impairment. All of the scans, however, were taken before any of the patients had developed the disease. The algorithm was able to predict which patients would end up impaired with an accuracy of 84 percent.

“This is an example how big data and open science brings tangible benefits to patient care,” said  Rosa-Neto to McGill News.

The biggest benefit to patient care could be improved clinical trials studying the effectiveness of drugs for Alzheimer’s, the most common form of dementia.

“By using this tool, clinical trials could focus only on individuals with a higher likelihood of progressing to dementia within the time frame of the study,” said Dr. Serge Gauthier, the study’s co-lead author, to McGill News. “This will greatly reduce the cost and the time necessary to conduct these studies.”

Research was funded by the Canadian Consortium on Neurodegeneration in Aging (CCNA) and the Canadian Institutes of Health Research.

Tags
a.i.algorithmalzheimer'sbrain scansdementiamachine learningneuroimaging
In this article
a.i.algorithmalzheimer'sbrain scansdementiamachine learningneuroimaging
Related
The Future
5 of the most amazing cracked codes in modern history
From 260-year-old ciphers to the most recent Zodiac Killer solution, these unbreakable codes just needed time.
The Future
The term ‘AI’ overpromises: Here’s how to make it work for humans instead
Is there actually anything deserving of the term AI?
The Future
Why is it so hard to give AI common sense?
There’s no telling whether machine-learned common sense is five years away, or 50.
The Future
Imagine an AI with an imagination
Understanding “why” may be the key to unlocking an AI’s imagination.
Health
Four people in the world have a mysterious dementia. Could it hold a key to Alzheimer’s?
Alzheimer’s has proved difficult to treat. But solving the mystery of this ultra-rare frontotemporal dementia may unlock new understanding.
Up Next
Starts With A Bang
Afraid Of Aliens? The Science Doesn’t Back You Up
Our most common fears of the “other” extend even into outer space. Here’s why those fears are baseless.“Man has gone out to explore other worlds and other civilizations without having […]