Corruption is as invisible as it is pervasive. Public trust is easily professed on public forums, and just as easily betrayed in back rooms. Money and favours influence decisions without leaving a trace. Pecunia non olet.

Yet corruption is not a victimless crime. Cutting corners on good governance costs money, endangers lives and erodes the public trust that oils the machinery of state in modern democracies.

So how to fight it? Corruption feeds off apathy and thrives in the shadows. It abhors the full glare of public attention. It is not a coincidence that the global organisation dedicated to its demise is called Transparency International.

TI produces annual reports, scorecards and a heat map of corruption around the world. The least corrupt countries, in the organisation’s 2016 Corruption Perceptions Index, were New Zealand and Denmark, followed closely by the other Nordic countries. Most corrupt? Somalia, with South Sudan and North Korea not far behind. 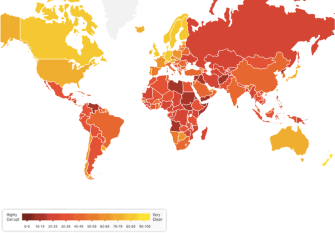 The French subsidiary of TI went one step further, and visualised the corruption in France on a map. Linking corruption to specific locations suddenly gives the various crimes caught under that term a certain weight and heft – and increases its visibility.

This Cartographie des affaires de corruption immediately points to a number of corruption hot spots: two concentrated zones in Paris and the North (near the Belgian border), and in and around Bordeaux in the southwest. There is a string of malfeasance stretching along the Mediterranean coast, and the heavily dotted island of Corsica seems particularly prone to corruption. 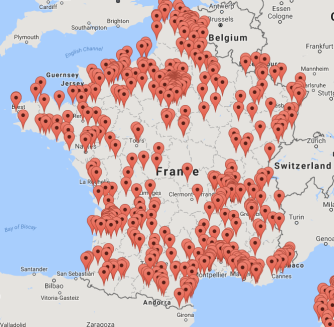 Conversely, the interior of France is largely corruption-free, some departments even entirely so. Of course, the incidence of corruption varies with the density of population, and perhaps declines disproportionately in the almost-empty interior because there are so few people to be corrupted by.

Each of the location markers is clickable, and provides a summary of the court case to which it refers. All parties mentioned are anonymised, but some are relatively easy to find out.

And so you can hop from one case of embezzlement to the next case one of abuse of power or trust, or you could use the search window to look for cases within specific frames of time or money.

Click on the logos in the top left corner to send a message to Transparency International France (“Did we miss anything?”), leaf through a lexicon of corruption, a FAQ file and a word on the map’s methodology. There is also a “This just in” section, with the latest court rulings.

And finally, there is a full geographic overview of France, per region and per department. The most public-spirited departments of France are: Ardennes, Cantal, Cher, Creuse, Gers, Loir-et-Cher, Nièvre, Sarthe – not a single case of corruption in any of these. Paris, with 61 cases, is the most corrupt. Not surprising, considering the concentration of money and power in the capital.

There is another interesting measure of corruptness: the number of affaires (*10) divided by the Gross Domestic Product for each department. By that token, the French overseas territory of Saint-Martin (95.16) is light years ahead of even Paris (3.07).

Mapping corruption at country level brings home the pervasiveness of the problem. Does this map indicate that France is corrupt? The French could do better, but also a lot worse. According to TI’s aforementioned 2016 Corruption Perceptions Index, France ranks #23 on the global list, just ahead of the Bahamas but behind Estonia. The U.S. is at #18.

This corruption map of France seems to be a local initiative. Similar maps of other countries would make for equally compelling reading. Except of course the corruption maps of Somalia, South Sudan and North Korea – they would be totally blank.

Everyone loves a good origins story.
Up Next
Politics & Current Affairs

Ritualized killings once took place in many societies and in most regions around the globe.