A man, a van, a GPS tracker: This Brit is writing 'STOP BREXIT' across Europe 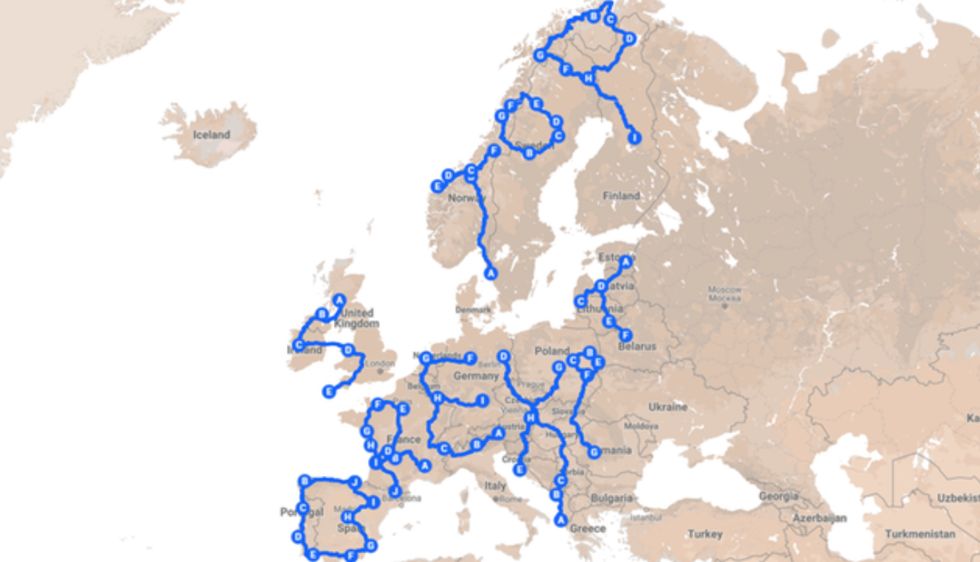 On 29 March 2019, the UK is leaving the European Union. Which means that this summer may be the last in which British citizens can travel restrictions-free across much of Europe, Andy Pardy realized.

So the 28-year-old from Exeter quit his job as a digital consultant and mapped out a tour that would take him from the Arctic Circle to the south of Spain, and from Ireland's Atlantic coast to Estonia's border with Russia.

Mr. Pardy is calling it, perhaps a bit hyperbolically, 'The Last European Tour'. But it's more than a farewell trip, it's also a political statement—it's a call to halt Britain's seemingly inexorable slide towards its exit from the EU.

Mr. Pardy is bringing his GPS tracker, and he's using it to spell out a continent-sized message across the map of Europe: STOP BREXIT. It's a statement short on words but big in size—in fact, a good candidate for the largest political slogan in history.

The trip began on 16 July at Loch Lomond in Scotland. Hopping over on the ferry from the Port of Stranraer to Northern Ireland, Mr. Pardy drove his van south into the Republic of Ireland, then east towards Dublin, crossing over to Wales in order to reach Trebarwith Strand in Cornwall. After 846 miles (1,522 km) and 30 hours on the road, that was the 'S' done.

A rare white reindeer on the road near Arvidsjaur in Swedish Lapland, while completing the letter 'O'.

On July 24, Mr. Pardy set off for Göteborg in Sweden to start the second leg of his tour. “I blasted past Oslo and on to Alesund before spinning around and heading through Trondheim, taking in as much of the breath-taking scenery as possible,” he wrote on his website.

With a parcours of 2,250 miles (3,621 km) to complete over mountainous terrain, the second letter was a bit tougher than the first. But on July 31, in the Norwegian town of Snåsa, Mr. Pardy finished the 'T'.

Following a circular trip with start and finish in Mosjøen (also in Norway), Mr. Pardy at the time of this writing had just finished the 'P' in Leipivaara, Finland. That's a lot of effort for just four letters, but the point of the trip is the journey itself as much as the message Mr. Pardy is splashing across the map.

"Freedom of movement is something I'm passionate about (…) I'm making the most of our last summer inside the EU by embracing the concept of free movement and embarking on a farewell tour," he told Sky News.

Coming soon: the 'B' in Brexit, or a drive around the Iberian peninsula starting and stopping in Bilbao. The 'R' will be mainly in France, while the 'E' will see Mr. Pardy also visit the Benelux countries, Germany, Italy and Austria. At 3,200 miles (5,150 km), the 'X' will be the longest trip, from Albania north to Berlin and then from Lodz in Poland south again to Nin Beach in Croatia. The 'I' will also take in a number of countries in Eastern Europe, and the final 'T' will be crossed in the Baltic states.

A rainbow on the way to Storjord, Norway.

Many thanks to Astrid Geeraerts for sending in this story, found here in The New European.