Heinrich Bunting (1545-1606) was perfectly aware that the continents weren’t really shaped like a cloverleaf. There are enough maps in his works (such as Itinerarium Sacrae Scripturae) to indicate he knew the continents had an irregular, and not a symbolic shape.

Yet he delighted in drawing other symbolic maps, examples of which can be anthropomorphic (Europe as a virgin) or hippomorphic (Asia as a winged horse). This particular map is a tribute to Buntings hometown Hanover, as the text above the map indicates: The Whole World in a Cloverleaf, Which Is The Coat of Arms of Hannover, My Dear Fatherland.

The map shows a world divided into three parts (Europe, Asia and Africa), connected at a single central point: Jerusalem. This is essentially still the same symbolic map of the world as the one first devised by Saint Isidore in the seventh century. Isidore’s ’T and O’-shaped map, itself inspired by Scripture, influenced Christian European mapmaking up until the age of discovery. 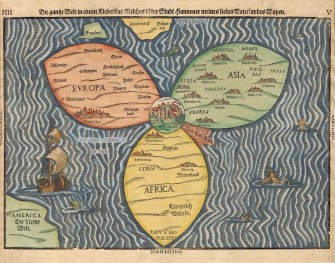 That age would be the one Bunting grew up in. He and his contemporaries were among the first generations of Europeans to know Isidore was wrong – but it’s almost impossible to resist imagining how this centuries-old archetype of a map took a while to be erased out of the common memory of cartographers.

Bunting’s map is nice in that it combine symbolism with realism: in the bottom left corner a piece of land is named America. Strange is that a similar detached piece of territory at the top of the map is labelled Denmark and Sweden. Bunting must have known that Denmark was contiguous with the European Continent.

Some named countries and places on the three continents are, left to right: