In 1946 at Westminster College in Fulton, Missouri, Winston Churchill gave one of his most famous speeches. In it, Britain’s war-time leader coined the name for the dividing line that would cut Europe in half for more than fifty years:

“From Stettin in the Baltic to Trieste in the Adriatic, an iron curtain has descended across the continent.”

But Trieste was more than the southern terminus of that border between the capitalist West and the communist East. Like Berlin, it was one of the potential flash points on that frozen frontline of the Cold War.

Trieste, an ethnically diverse and strategically important port city, had been part of the Habsburg Empire until its demise at the end of World War I, after which it had been annexed by Italy, but claimed by Yugoslavia.

At the end of World War II, the region was liberated almost simultaneously by Yugoslav troops from the east, and the New Zealand 2nd Division from the west. This formed the basis for a partition proposed by British General Sir William Morgan. The Morgan Line was established on June 10, 1945.

To contain the rival Italian and Yugoslav claims, a protocol of the Peace Treaty with Italy in 1947 proclaimed the Free Territory of Trieste, a neutral and independent zone. The Free Territory never got a unified civilian administration, and remained under separate military occupations: British and American in Zone A, Yugoslav in Zone B.

This point of friction between East and West could conceivably have become as problematic as Berlin, or even worse. But Yugoslavia’s break with the Soviet Union in 1948 de-escalated the problem.

In 1954, the so-called London Memorandum divided the Free Territory of Trieste into a Zone A in the north, containing the city of Trieste itself, and a larger Zone B in the south, on the Istrian peninsula. The military occupation ended. Zone A came under Italian jurisdiction, Zone B fell to Yugoslavia.

This de facto partition was formalised by the bilateral Treaty of Osimo of 1975, ratified in 1977. In 1992, the newly-independent state of Slovenia took over the jurisdiction over Yugoslav Zone B.

This Slovenian stamp celebrates the 50th anniversary of the London Memorandum. It identifies Cona A and Cona B. The Slovenian place names Gorica and Trst indicate the now-Italian towns of Gorizia and Trieste. Trzic, Piran and Koper are presently Slovenian, N. Grad, Buje, Miu(e), Porec, Rovinj and Rijeka are Croatian. 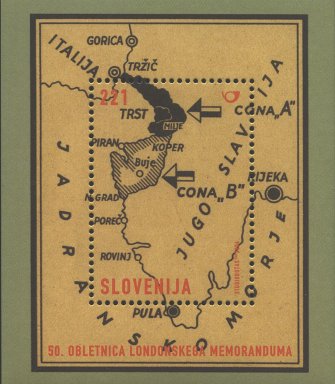 This map was found on Dan’s Topical Stamps, an excellent philately resource.

Castro gifted the island to East Germany. They never gave it back. So whose is it now?