Most people think East Germany ceased to exist in 1990, when the (East) German Democratic Republic was absorbed by the Federal Republic of (West) Germany. So did I. Turns out I was wrong: the GDR lives on, and in a very comfortable climate to boot: a small island off Cuba is the last official territory of the good old Deutsche Demokratische Republik. 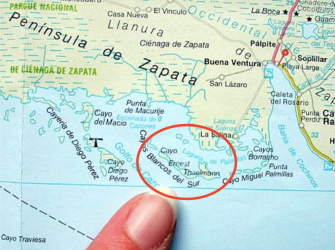 In a military exclusion zone in the Gulf of Cazones, not far to the south-west of the infamous Bay of Pigs, lies a small island formerly known as Cayo Blanco de Sur. The island is 15 km long, but never more than 500 metres wide (although another source claims it is 24 km long and 1 km wide). It is uninhabited but for the iguanas and birds that are indigenous there, and the occasional tourists stopping over. The area is very biodiverse, hosting several endangered species of fish and coral. The reefs make the island inaccessible to any but the smallest boats, and even then landing often involves wading ashore.

In June 1972, Fidel Castro while on a state visit to East Berlin gifted the island to East Germany. Cuba renamed it Cayo Ernesto Thaelmann, after the German communist politician. Ernst Thälmann (German spelling) was leader of the German Communist Party (KPD) during much of the Weimar era, unsuccessfully stood for the presidency against Hitler and was imprisoned without trial from 1933 until his execution in 1944.

The southern beach of the island was renamed Playa RDA (‘GDR Beach’), and in August 1972, the East German ambassador to Cuba erected a bust of Ernst Thälmann on communist Germany’s one and only foothold in the tropics.

In 1975, East German Schlager singer Frank Schöbel traveled to the island to record ‘Insel im Golf von Cazones’ on the spot – a musical effort which apparently has been lost to posterity.The island wasn’t mentioned in the treaty unifying both Germanys, which makes it at least thinkable that at present it’s the last remaining piece of East German territory. For the reunified (and capitalist) Germany post-1990 never made any formal claims on the island.

In 1998, the island was severely battered by hurricane ‘Mitch’ – the bust of Thälmann fell over and hasn’t been replaced since. In 2001, the German online newspaper ‘Thema 1’ learned of the existence of Ernst Thälmann Insel and attempted to parcel it up for sale. The renewed interest by a re-united, ‘capitalist’ Germany embarrassed Cuba, which denied German journalists access to the island and declared that the 1972 transfer was ‘symbolic’ only… 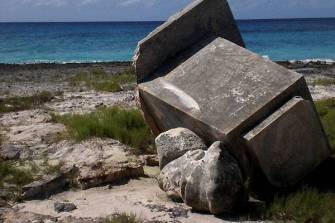 78 – The Most Generic Country Ever

This map is from the Agile Rabbit Book of Historical and Curious Maps (Pepin Press, 2005). It’s a British map dating from 1897, explaining geographical terms by showing them in […]