The Albanians are descendants of the Illyrians, an ancient Balkan people who preceded the Slavic populations surrounding their native territories. They presently have an independent nation – Albania, in their own language ‘Shqipëtar’, meaning ‘Land of the Eagles’ – but are also the majority in Kosovo, nominally still a part of Serbia but de facto a semi-independent state under UN tutelage. There are other significant Albanian populations in Montenegro, Serbia proper, Macedonia and Greece. This map shows the maximum extent of Albanian territorial ambitions – ‘Greater Albania’. 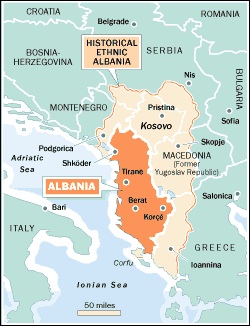