Tell me where you do your grocery shopping, and I’ll tell you where you are. Well, more or less. For even in a huge and homogenised market like the United States, many large grocery chains are still recognisably regional brands.

As shown by this kaleidoscopic overview of grocery brands, each with at least 200 outlets across the US, their diverse geography could be mistaken for a natural ecosystem. 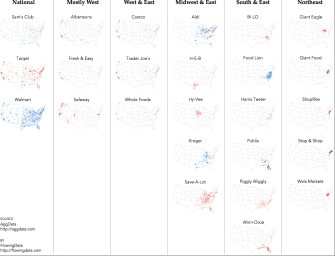 Like species of flora and fauna, most of these brands seem uniquely adapted to a local environment, where they can defend a competitive advantage, avoiding competitors who do the same elsewhere. But that principle only applies to the more difficult terrain. Certain stomping grounds offer such rich pickings that several brands compete fiercely on the same turf.

And then there are one or two super-adaptive, invasive species who thrive anywhere, and threaten to overgrow the entire playing field. Like Walmart – the Japanese knotweed of food retailing. If you’re inside one of their big boxes, you could be just about anywhere from Maine to Miami, from Seattle to San Diego, and anywhere in between.

So what exactly do the dots on this distribution chart tell us? Only three chains have the omnipresence to be called ‘national’. Three more stake their claim out west. Another three are bi-coastal. All the others have their centre of gravity in the country’s eastern half. Not surprising, since 60% of America’s 310 million consumers live east of the Mississippi. 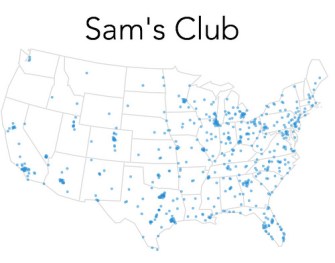 Named after Samuel Walton, the same guy who founded Walmart, this chain of membership-only retail warehouse clubs is still owned by Walmart. This may explain its national reach, which is nevertheless a bit thin on the ground, compared to the other two national chains. 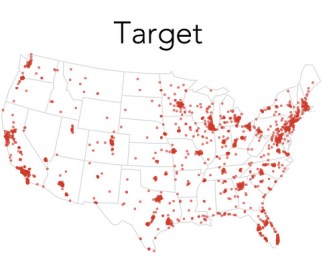 Founded and still headquartered in Minneapolis, Target is the largest discount retailer in the US except Walmart. But the difference between 1 and 2 is staggering: Walmart had a 2012 turnover of almost $470 billion, while Target had to make do with sales just under $75 million. As proven by this map: Targets are clustered around the big metropolitan areas, but are a lot less prevalent elsewhere. 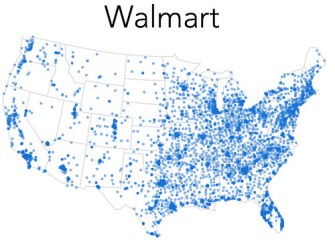 Contrary to popular belief, there isn’t a Walmart in every county of the United States. Numerically, it’s possible: there are 3,144 counties (or equivalents such as boroughs and parishes) in the US and 4,777 Walmarts (of which 500 in Texas alone). But they are unevenly spread: for North Dakota’s 53 counties, there are only 15 Walmarts, for example. Still, Walmarts are a good indicator for overall population density: thick in the east, thin in the west, except the West Coast and a few isolated big cities. 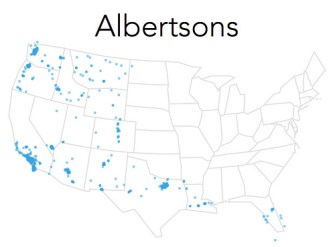 In March this year, Albertsons and Safeway announced their engagement to be merged. This might seem strange, as both are ‘western’ chains. But they’re still quite complementary: Albertsons is present in Florida, Louisiana and Texas, where Safeways isn’t. The complementarity is greatest in California, with Albertsons heavily represented in the south, and Safeways in the north. 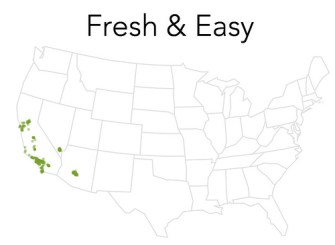 Fresh & Easy was founded in El Segundo in 2007 and experienced rapid growth, hitting over 200 stores throughout California, Nevada and Arizona. But the owners, UK-based Tesco, announced they were to withdraw from the US market. The chain has since filed for bankruptcy. 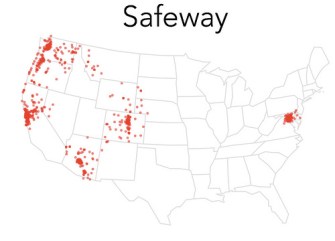 A western chain, with tight concentrations of stores throughout northern California, coastal Oregon and Washington, and the urban centres of Arizona and Colorado. And, eccentrically, a big concentration in and around Washington DC. All indeed fairly complementary to Albertsons. 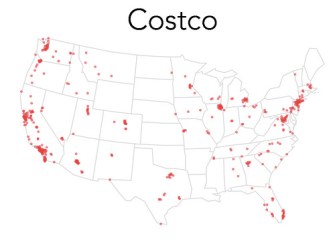 Sometimes dubbed the ‘Anti-Walmart’ because it pays its workers above-competition wages and benefits, Costco also goes out of its way to select its middle-management from its own ranks. Talking about cradle-to-grave care: Costco apparently does a decent range of coffins. Virtue doesn’t pay, by the way: while Walmart sprouts up just about anywhere, CostCo is concentrated on the West Coast and the BosWash corridor in the East, with only a few dapples in between. 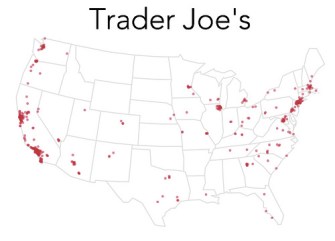 Trader Joe’s has been described as not so much a specialty grocery store than a “tiki-themed wonderland filled with pyramids of Cookie Butter jars and Two Buck Chuck”. Trader Joe’s stocks about 4,000 items instead of your average grocery store’s 50,000, but over 80% of them are own-brand products. Sounds like a lot of work. Which may explain why these follow the same sparse distribution pattern than CostCo, but seem even fewer and further between. Half of its over 400 stores are in California. 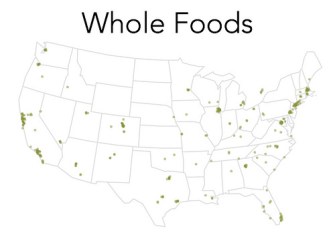 You know your neighbourhood has gentrified when a Wholefoods spaceship lands. Soon, the streets will be swarming with hipsters nibbling natural and organic foods, rent will be unaffordable and you’ll have to follow the meat eaters and candy munchers to other, grimmer districts. If you want to keep ahead of the pack: go rural. For all its emphasis on honest, back-to-nature fare, Wholefoods is concentrated solely in the big, bad cities. 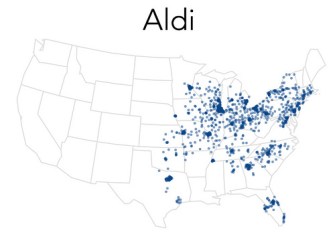 Aldi has famously divided Germany, and the rest of the world in two. Outside the Heimat, Aldi Nord runs the Benelux, Denmark, France, Spain, Portugal and Poland (or at least the Aldi stores in those countries). Aldi Süd operates across the UK and Ireland, Austria and Hungary, Switzerland, Slovenia and Australia. Both operate in the US, however: Aldi Süd under the Aldi flag; Aldi Nord owns Trader Joe – effectively creating an Aldi East and and Aldi West. 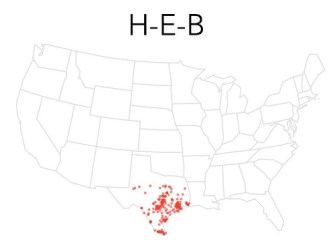 Why the strange acronym? Well, this chain was founded by Howard E. Butt. Say no more. Despite only operating in Texas (and northern Mexico), H-E-B ranks as America’s 12th largest private company (and the biggest one in Texas). Its mascot is H-E-Buddy, a life-sized, life-endowed grocery bag. The company donates 5% of its pre-tax profits to charity, but used to be even more religious: until 1976, it didn’t sell alcohol and closed on Sundays. 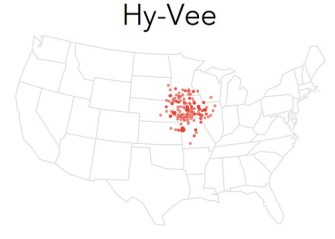 As can be seen on the map, Hy-Vee is an Iowa thing, but it has spread to adjacent areas in neighbouring states, as far south as Branson, Missouri (or at least that’s where that dot seems to be). 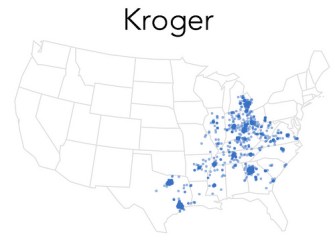 Another chain with a clear, albeit somewhat larger domain: a big cluster in Michigan, Ohio and Indiana, a seeping into the South, with major outposts in Atlanta and the big Texas cities. The Pennsylvania state line acts as a magic border to northeasterly expansion. 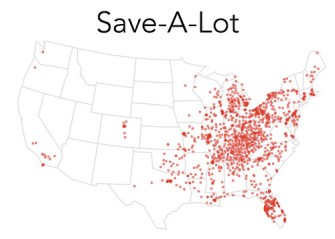 It probably shows my age, but I can’t see this name without chuckling about the Try-N-Save in The Simpsons. There may be a Springfield in every state, but there isn’t a Save-A-Lot in every Springfield. Excellent coverage east of the Mississippi (although, strangely, not a single one in Vermont) petering out on the other side of the Big Muddy. A smattering of stores in Denver, across southern California and two pinpricks in Oregon and Washington. But that doesn’t really count as trying. 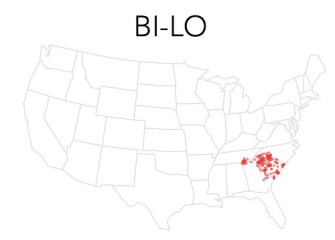 As South Carolinian as Hy-Vee is Iowan, also with the same slight growth outside the state: a handful of stores in Georgia, North Carolina and Tennessee. Almost made it into Alabama. 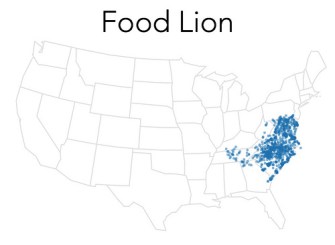 The Food Lion roams the Mid-Atlantic states, from Maryland to South Carolina, and inland as far as mid-Tennessee and southern Kentucky. You’re most likely to come across this species in Maryland, North Carolina and the dark-blue north of Virginia. 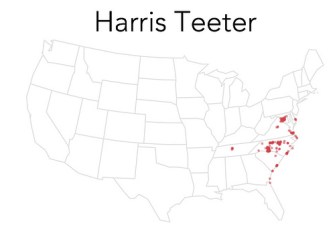 Is this where the verb ‘teetering’ comes from? This chain is competing for North Carolina and DC with Food Lion, but is very much in the minority. 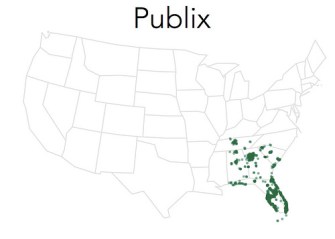 Publix’ distribution pattern closely mirrors Florida’s population centres: both coasts, and the Orlando corridor. The northward spread is concentrated on Atlanta, and Nashville. All stores south of the infamous Parallel 36°30′ north. 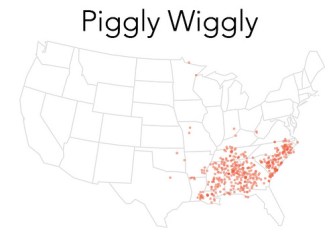 Purely from a geographic point of view, an ideal candidate for merger with Publix. Piggly Wiggly is absent from Florida, but much stronger throughout most of the South. Memphis-founded and retaining a strong Southern flair, Piggly Wiggly has a few outposts further afield – as far north as Minnesota, on the Canadian border. 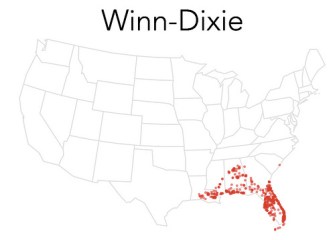 Again, judging solely from the map, an arch enemy of Publix: competing for the same turf in Florida – but on the other hand, absent from most of Georgia, all of South Carolina (except for that one, lonely dot) and Tennessee. 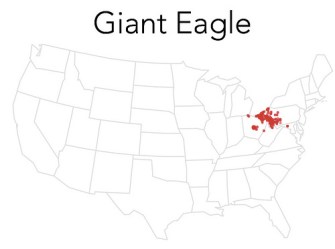 The Giant Eagle spreads its wings across Ohio and Pennsylvania. Two dots elsewhere, but still close by: one in West Viriginia, the other in Maryland. 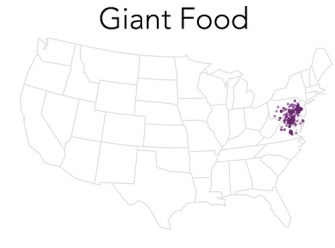 Stretching from Richmond, Virginia to the borders of New Jersey, Giant Food seems to make its stand in DC, Baltimore, Philadelphia. Its habitat is curiously compatible with that of the other small giant. 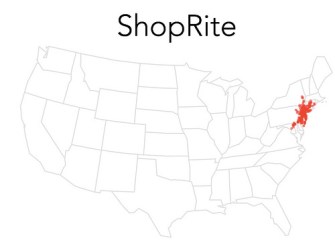 If you’re in a ShopRite, you could be anywhere between DC and NYC, but not many other places. ShopRite territory takes in all of New Jersey, extends a bit up the Hudson Valley and into Pennsylvania, and seems to have overrun most of Connecticut, but that’s it. 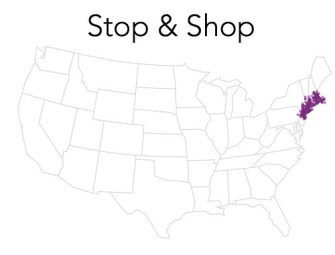 Stop & Shop territory partly overlaps with ShopRite, but starts and ends more to the north: halfway up New Jersey to southern New Hampshire – so also including Boston – and in fact all of Massachusetts. 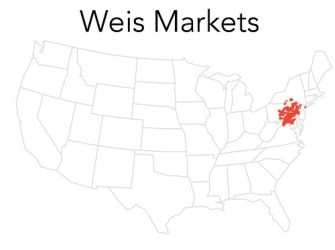 Barring a single shop in what looks like New York City, Weis Markets is an inland phenomenon, covering the eastern two thirds of Pennsylvania, a tiny bit of western New York state, the western edges of New Jersey and the middle of Maryland, plus Washington DC and a small foray into Virginia.

Many thanks to Nathan Yau, who produced this map for Flowing Data, his excellent blog on the visualisation of data in statistics, design and data science. He has an abiding interest in the geography of food. See also his posts on food deserts, coffee geography and that enduring rivalry, bars vs. grocery stores.

Please note that this article was first published in 2014, with some figures and maps likely to have become outdated.

Related
The Present
How heat pumps of the 1800s are becoming the technology of the future
Innovative thinking has done away with problems that long dogged the electric devices — and both scientists and environmentalists are excited about the possibilities.
Starts With A Bang
JWST’s hunt for most distant galaxies gets double boost
Along with gravitational lensing and ALMA’s incredible long-wavelength spectroscopy, JWST is reshaping our view of the early Universe.
Thinking
Finding your essential self: the ancient philosophy of Zhuangzi explained
Adopting a healthy scepticism towards inherited ideas means “emptying the container of the Self.”
The Future
Startup’s bladeless flying car is designed to reach Mach 0.8
One of Jetoptera’s VTOLs is expected to reach speeds of around 614 mph, about as fast as a commercial jet airliner.
Health
New blood types are often discovered following medical disasters
New blood types are regularly discovered by an unusual absence or an unusual presence — both of which can result in tragedy.
Up Next
Surprising Science
Why Conservatives Are Actually Pro-Government
“We are free by nature because we can become free, in the course of our development. And this development depends at every point upon the networks and relations that bind us to the larger social world.”